The Owls out-rushed the Wildcats by 257 yards in a resounding home win. 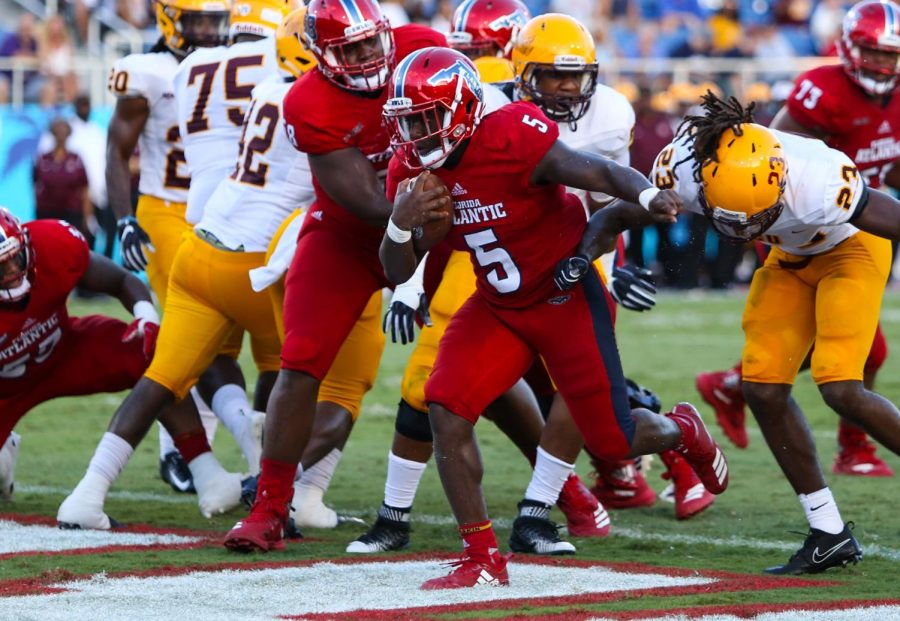 FAU junior running back Devin Singletary (5) runs with the ball from 2nd and goal to score a touchdown for FAU. Photo by: Alexander Rodriguez

The FAU offense started off strong, scoring four unanswered touchdowns to begin the game, putting them up 29-0. All four of those touchdowns were scored by running back Devin Singletary, making him the second player in Conference USA History to score four rushing touchdowns in a single quarter.

The Wildcats answered at the beginning of the second quarter with an Akevious Williams passing touchdown to Jimmie Robinson. But after an interception by linebacker Rashad Smith, Singletary struck again.

After a Chris Robison interception, Bethune-Cookman answered with another touchdown pass from Akevious Williams, making the score 36-14 just before the half.

The second half started off poorly,Chris Robison throwing another pick, but he redeemed himself less than five minutes later by finding Jovon Durante in the end zone on a 10-yard touchdown pass to make it 43-14.

After another Williams passing touchdown for Bethune was answered by a tackle-breaking 21-rushing touchdown by the Owls’ De’Andre Johnson, who replaced Chris Robison late in the third quarter, the score was 49-28. That’s where it would stay.

Singletary finished his historic outing with 19 carries for 84 yards along with the aforementioned five touchdowns, all of which he scored in the first half. Kerrith Whyte also had an impressive game on the ground, rushing for 100 yards on 15 attempts.

The Owls begin a two-game road trip next week, starting with No. 18 UCF in Orlando next Friday at 7 p.m.