The renovation is part of a new athletic facility that broke ground earlier this year. 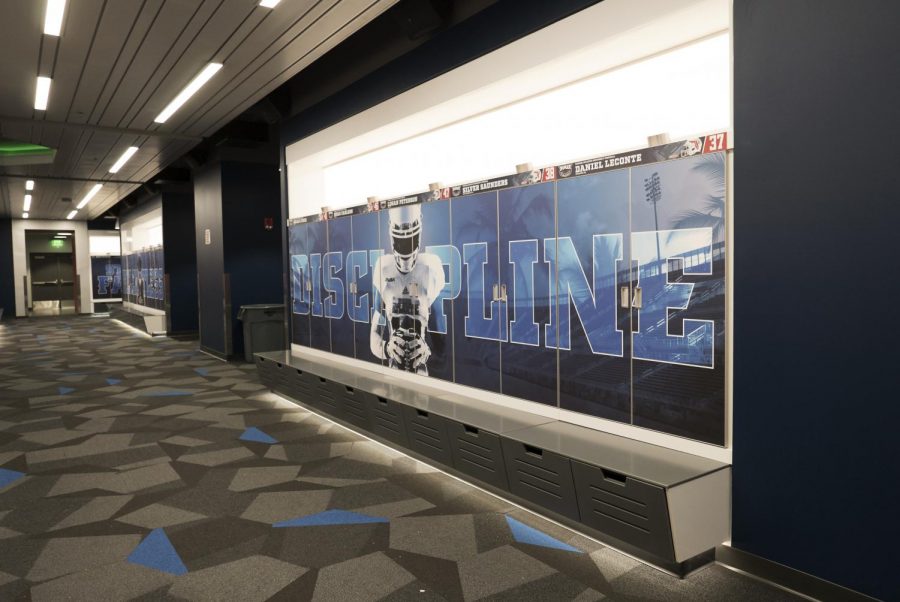 The renovated lockers feature each player's name and hometown. Photo by Violet Castano

Correction | Sept. 20, 4:01 p.m. This story has been updated with the correct cost of the athletic facility.

If you build it, they will come.

The renovated locker rooms will be part of an athletic facility set to cost $65 million in total, according to FAU’s Major Projects report. The facility, which is supposed to attract new recruits, will be named the “Schmidt Family Complex for Academic and Athletic Excellence.” Construction started in February of this year, but there is currently no set end date.

“We were 100 years behind normal places,” Kiffin said to reporters, who toured the new-and-improved locker room this past Wednesday. “It’s good for the first stage. That’s really not the most important stage, obviously, because you use that locker room to change clothes. That’s good for recruiting and stuff, having the next stage with the weight room … It’s really a big step.”

Along with nearly doubling in size, new additions to the locker room include a foosball table, a players’ lounge, and personalized name plates above the lockers featuring the athletes’ name and hometown.

Over the last five years, FAU’s recruiting classes ranked No. 79 in the nation on average — per 247Sports. Its highest ranked class was the 2017 group that ranked No. 60 in the country.

Despite the lack of star recruits on paper, the Owls swept their conference a season ago and opened 2018 on Sports Illustrated’s preseason Top 25.

With the new improvements to the locker room, FAU’s athletic facilities have begun to look the part of the nationally ranked program it hopes to be going forward. The next step is for Kiffin and Co. is translating that momentum to the recruiting trail.

“It was amazing just to see how far us as a program, to see how far we’ve came,” running back Devin “Motor” Singletary said to Owl Access. “I was glad to have that big ol’ locker room. We got more space and everybody’s not on top of each other.”

“That’s one step closer to, I guess, feeling like a bigger program.”

A newly plastered message on an FAU locker room wall reads: “We are not here to take part, we are here to take over.”

The Owls continue their hunt to do exactly that in a road battle with UCF on Friday night at 7 p.m.

Wajih AlBaroudi is the sports editor of the University Press. For information regarding this or other stories, email [email protected] or tweet @WajihAlBaroudi.