The Owls would own a winning record with a victory tomorrow night. 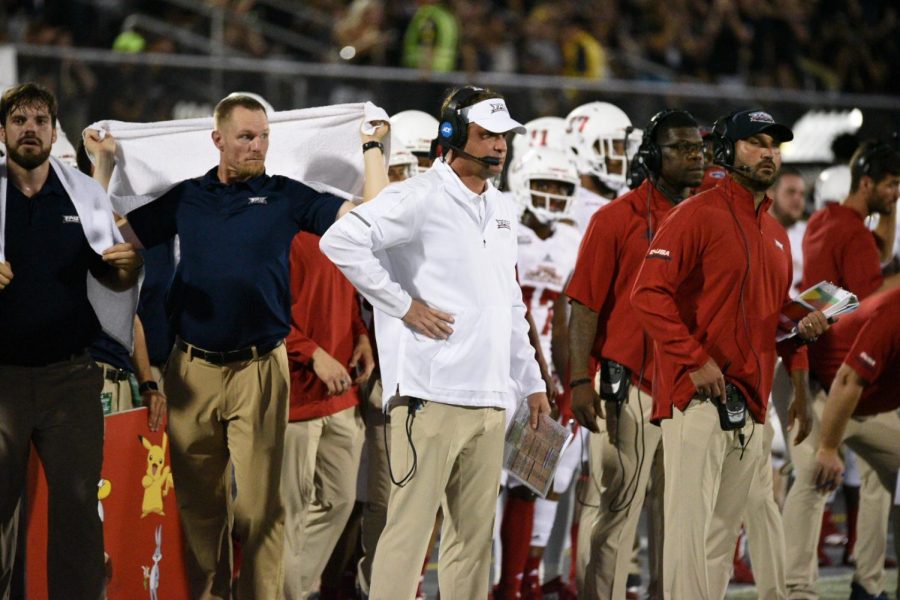 FAU head coach Lane Kiffin awaits on the sideline after a call was made against FAU. Photo by Pierce Herrmann

FAU begins conference play at Middle Tennessee tomorrow night, and will need to improve on its passing game and defense to come out on top.

For the Owls (2-2) to dominate the Blue Raiders (1-2), they need to tighten up the flaws they have showed early on in the year.

The passing game represented FAU’s biggest flaw in Week 4, quarterback Chris Robison throwing three interceptions in what was a forgettable performance. Because of Robison’s struggles, receivers Jovon Durante and Willie Wright were unable to make plays down the field.

Expect Robison and the air attack to bounce back tomorrow, recreating a similar showing to the 471-yard output they produced against Air Force.

Devin Singletary and Kerrith Whyte were dominant on the ground last week, keeping the Owls in the game against a nationally ranked team in UCF. The pair will be leaned on again tomorrow – especially Singletary, who rushed for 131 yards and three touchdowns in Week 4.

The concern is still the defense, which has been suspect through the first four games of the season. The coverage on the back end and the pass rush needs to improve if the Owls hope to contain quarterback Brent Stockstill and the Middle Tennessee offense in their Conference USA opener.

Coach Lane Kiffin and his staff have work to do in fixing the weaknesses FAU has shown thus far – especially on defense. Tomorrow night is their chance to prove those early struggles were nothing more than a blip on the radar.

The Owls can improve to three wins on the season with a victory at Middle Tennessee tomorrow night, with kickoff set for 7 p.m in Murfreesboro.