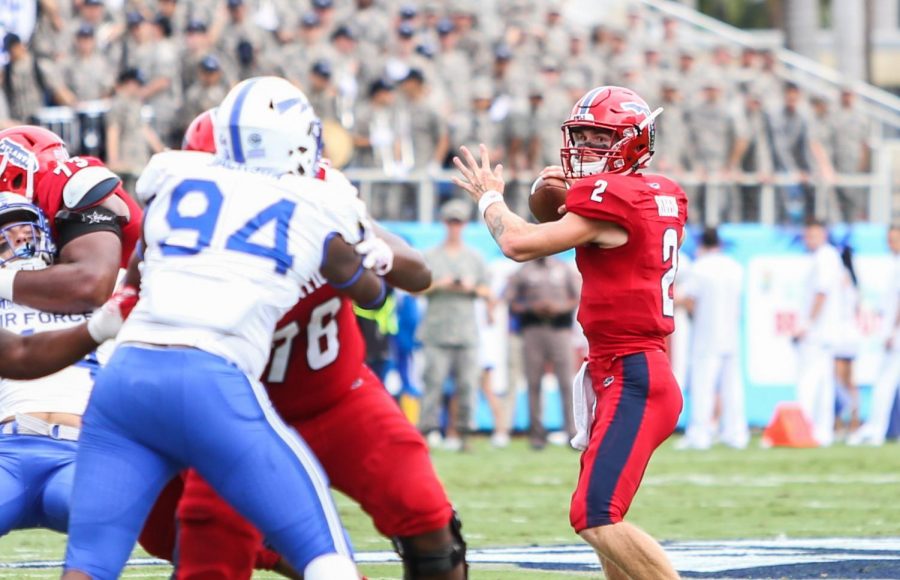 FAU redshirt freshman quarterback Chris Robison (2) decides where to throw the football before being tackled by the Air Force defense. Photo by Alexander Rodriguez

The Owls melted down in the second half of its Conference USA opener at Middle Tennessee, allowing a game-winning touchdown and ensuing two-point conversion in the final minutes of a 25-24 defeat.

The problem was the passing game.

FAU quarterback Chris Robison had a shaky day, passing for only 154 yards on 27 attempts. He was productive with his legs, however, rushing for a 45-yard score in the second quarter.

While the FAU defense contained Middle Tennessee quarterback Brent Stockstill in the first half, it was torched by the passer in the second half. Stockstill threw for 259 yards with a touchdown and an interception in the Blue Raiders win. He also led his team in rushing with 56 yards.

The defense failed to find an answer for Stockstill, who led Middle Tennessee on a late touchdown drive to bring the Blue Raiders within one. But, instead of taking the extra point and tying the game to send it to overtime, Middle Tennessee decided to go for the win with a two-point conversion.

It was converted, Stockstill connecting with Gatlin Casey over the middle to give their team the final lead.

The Owls look to bounce back next Saturday when they host Old Dominion, kickoff for the Oct. 6 contest is set for 5 p.m.