FAU will start construction this December and aims to be finished in 2020. 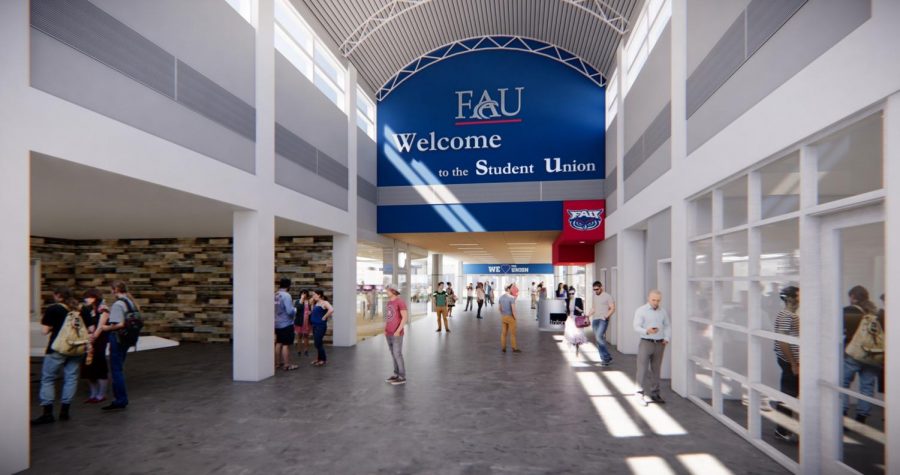 The main entrance to the Student Union will have renovated lighting and flooring. Photo courtesy of FAU’s website

A student walking into the Union two years from now will find boutique shops and new conference space. Gone will be the Burrow, replaced by a game room.

These changes are part of “The New U.” A $24 million renovation project to update the Student Union, originally built in 1972, will begin this December.

The project looks to turn the Union into the heart of Boca campus life, something Student Union Director Michael Cooper admits isn’t the case right now.

Cooper hopes the project, scheduled to be completed in 2020, will give students “more pride and passion for the place.”

In order to keep the Union open during renovations, the project will be completed in phases similar to the Breezeway construction, said FAU spokesperson Joshua Glanzer.

The renovated Union will include new shopping options, a conference room, a modernized ticket center, and a game room where the Burrow is currently located. To replace the bar and grill, a new restaurant will be built where the Live Oak Pavilion rooms are found. Cooper said it will serve beer and wine, but that that’s all he knows about the dining spot at the moment.

“It’ll be like this mini city that they have to come to, instead of the one little space downstairs, the lobby area,” he said.

In place of the outdoor seating area behind the Union, there will be an amphitheatre courtyard. Once completed, “it will be an outside space that at nighttime will come to life,” Cooper said. He added that FAU plans on hiring live music acts to play the courtyard.

One of the largest changes involves a new building for conferences and student organizations, called the Banquet Hall. This will be built on the concert lawn between the Union and Parking Garage 1 on Volusia Street.

There will also be a “revamped version of Outtakes” at the front of the Student Union.

MacDonald, who sits on the Union construction committee, added that Student Government contributed $1.7 million toward the project.

He said he is most excited about the new Banquet Hall, which will seat up to 1,000 guests. Student organizations, he maintains, need a space of their own.

“There was a huge need to expand the meeting space, and the only way to do that was to build more,” MacDonald said.

Cooper and MacDonald are also working on making the second floor of the Union a “Commuter Hall,” a space where commuter students can hang out and feel welcome.

Cooper believes FAU students partially move off campus because they don’t have a communal place to relax in. At other schools Cooper has visited, the Student Unions are the center of student life, and he wants that to be the case at FAU.

“I’m thrilled to death. And I can’t wait for it to be done because I think it’ll be a new and exciting place for students to come to,” Cooper said.

There will be a wall with flags representing all the countries FAU international students hail from as well. This, Cooper said, will give these students more of an “ownership” over the Union.

While FAU doesn’t plan on going over budget, the university is looking for donors to cover some of the costs, Cooper added. He mentioned that Student Government wanted to pay for a fountain to be built near the amphitheatre courtyard.

“Get excited. I think it’s going to be really cool actually,” MacDonald said. “I won’t be here when it’s finished, but I think it’ll be good for students, especially for incoming students.”

FAU opened in the fall of 1964, with 713 students. As FAU was known as a commuter school, it didn’t make sense to have a community space at the time.

But as the university grew, administration knew the university had to expand both its residence halls and student facilities. So, FAU started designing the “University Center,” which would eventually become the Student Union, according to FAU’s website.

FAU’s construction of the University Center totaled a little over $2 million, and the 55,000 square foot building was completed in September 1972. The latest renovation in 2002 more than doubled the size of the building to over 100,000 square feet.

But according to FAU’s Expansion and Renovation documents, it wasn’t “adequate to address the student population at the time.”

And what students know to be the Burrow today, was the Ratskeller in 1972 and Wackadoo’s Grub & Brew in 2002. Now the Burrow will be replaced with a different restaurant, but along with other aspects of the Student Union renovations, FAU isn’t sure what to replace it with yet.