But, they could be moved back to campus at any time. 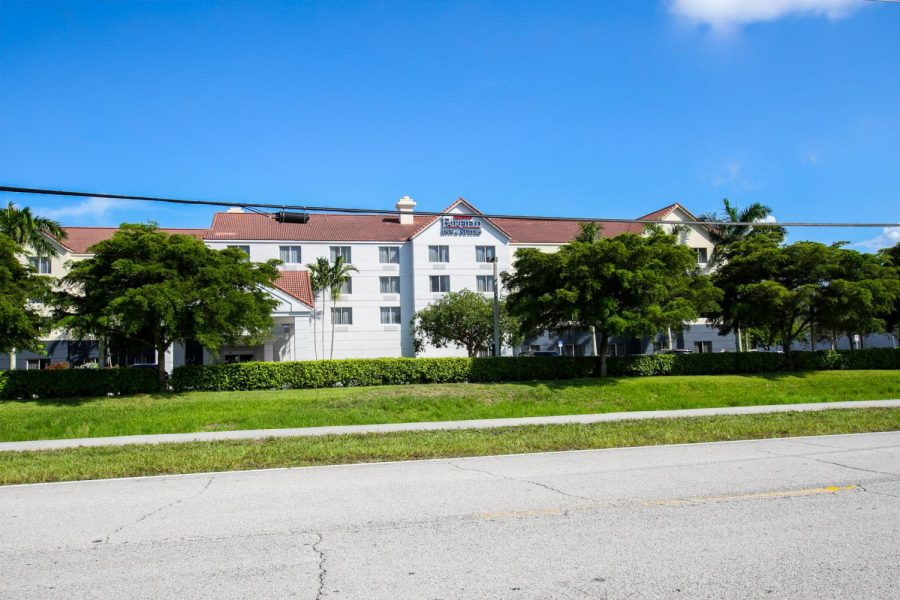 The Fairfield Inn & Suites, located near FAU and Cinemark Palace 20 movie theater, will be the temporary housing for students who were told on campus housing was overbooked. Photo by Alexander Rodriguez

Editor’s note | August 22, 3:45 p.m. The previous version of this story incorrectly stated students haven’t lived in hotels in the past decade, but a student confirmed she lived in a hotel off campus in 2011.

Due to on-campus housing’s “full capacity,” dozens of students will be living at a hotel for the foreseeable future.

As of yesterday, over 100 students moved in to the Fairfield Inn and Suites near the Boca campus, said FAU spokesperson Joshua Glanzer. If students drop out and dorms become available though, students living at the hotel may be moved back to campus.

This stems from the fact that the university oversigned on housing contracts. Students have lived in hotels as recently as 2011, according to a former student, Natasha Grullon.

Senior Kate McPartland is one student who will live at the hotel. She said she’s frustrated at the change, which she found out about at the beginning of August.

“The worst part for me is the fact that at any moment they can tell me I have to move out of the hotel and back to campus in the middle of the semester,” she said. “If they’re going to make a mistake like this, they should at least allow us to settle in somewhere while we are focusing on school instead of uprooting us in the middle of the year.”

However, she is looking forward to her single room, king-sized bed, and free breakfast. Other students will have double rooms with roommates. The students also will have a mini-fridge and microwave, and their rooms are cleaned weekly, according to the FAQ sheet provided by Housing.

To help prevent this from happening in the future, FAU is looking to increase the number of on-campus dorm rooms.

“FAU is currently in a housing expansion plan that will add about 1,500 beds between Boca and Jupiter over the next several years,” Glanzer said.

McPartland added that “for any students without cars, this limits their hours being able to access the on-campus resources that they are paying for.”

Although, FAU will have a shuttle come to Fairfield Inn and Suites every hour on the hour, Monday through Friday, from 7 a.m. to 7 p.m.

And while a meal plan is required for most on-campus residents, students won’t have to purchase one if they’re living in the hotel. Resident Assistants will also be living on each floor with the students.

Check back with the University Press as this story develops.

Cameren Boatner is the news editor of the University Press. For information regarding this or other stories, email [email protected].