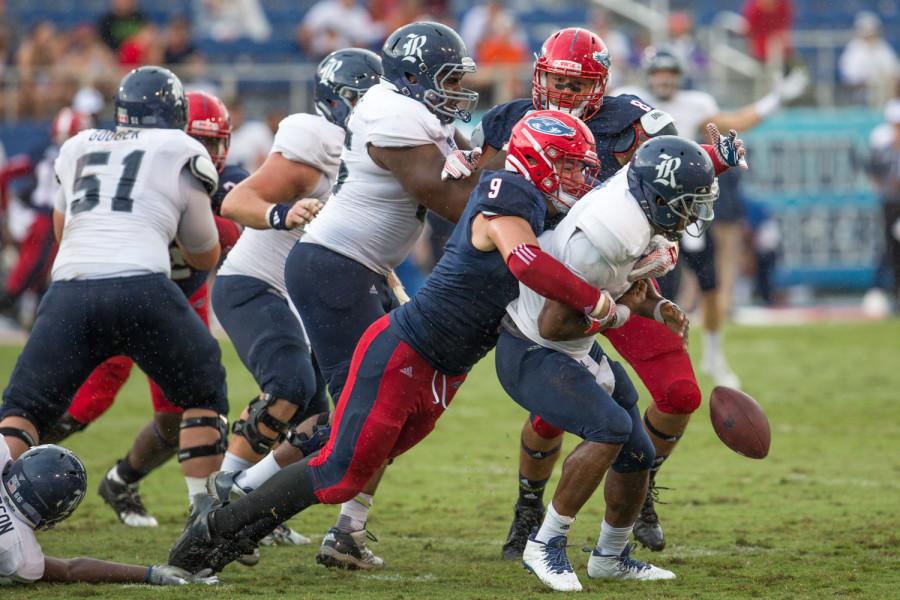 AU fans have a chance to see plenty of Owl fingers thrown up on NFL Sundays next season.

The 2018-19 NFL season is inching closer with most teams starting their voluntary practices this week. And 10 former FAU football and current NFL players look to make their mark with strong performances.

Howell signed a free agent contract with his hometown team quickly after the 2018 NFL draft’s conclusion. The Coral Gables native led the FAU backfield in yards per carry last season at 6.6 and finished with 740 yards and five touchdowns on the year. The powerful running back joins a crowded backfield featuring starter Kenyan Drake, veteran Frank Gore, and the Dolphins’ fourth-round draft pick out of Arizona State, Kalen Ballage.

Joseph will be joining Howell this summer in Davie to play for the Dolphins. He nailed 15 of his 21 field goal attempts last season and was nearly perfect from short to intermediate range, missing only one field goal inside forty yards. Joseph will battle Miami’s seventh-round draft choice Jason Sanders for the starting kicker position.

Former “Last Chance U” star and longtime quarterback John Franklin III switched to wide receiver in his lone season for the Owls, and will make another position change at the professional level. The speedy Franklin was signed as a defensive back by the Bears, and will look to translate his athletic ability and 4.45 speed to the defensive side of the ball for the first time in his career.

LeBlanc is entering his third season in the Windy City, and will be joining Franklin III in a talented Bears defensive backfield featuring cornerbacks Kyle Fuller and Prince Amukamara. The former Owl was a key contributor as a rookie in 2016, starting nine games and scoring a pick-six off the arm of Detroit Lions quarterback Matt Stafford. He was relegated to mostly special teams work in his sophomore season, and hopes he can prove first-year Bears head coach Matt Nagy that he is capable of reclaiming a starting position in 2018.

Coley made the most of his opportunity as an undrafted free agent last season. Not only did he make the 53-man roster, he also impressed the coaches enough to earn a full-time starting role on the Browns’ defensive line. Cleveland was winless in 2017 play, but the expectations for Coley’s Browns have been raised exponentially after first-year general manager John Dorsey revamped the roster with talented draft picks and impact free agents. The hype around Cleveland’s possible turnaround drew the eyes of HBO, which will be filming Browns training camp for their behind-the-scenes football show, “Hard Knocks”. According to an HBO tweet, ‘Hard Knocks’ premieres on Aug. 7.

A 2017 third-round draft pick, Hendrickson went to the playoffs in his very first professional season. Hendrickson found the winning formula early in his NFL career, and If it wasn’t for a miraculous game-winning touchdown catch with time expiring by Vikings receiver Stefon Diggs, his team would have been in the NFC Championship game last season. FAU’s all-time sack leader (29.5) will be competing with 2018 first-round draft pick Marcus Davenport for a starting position opposite AP All-Pro First Team defensive end Cameron Jordan.

Morris is entering his third year in Dallas after reaching the Pro Bowl in two of his first four seasons playing for the division rival Washington Redskins. An NFL mandated suspension handed to star running back Ezekiel Elliott last season thrust the former Owl into five starts in 2017. Now that Elliot is back, Morris is expected to return to a backup role. Morris finished his college career as FAU’s all-time leading rusher (3,529 yards).

FAU’s most dynamic punt returner in school history (15.6 yards per return) is hoping to recreate some of that same magic back deep for the Gang Green in 2018. Whitehead was acquired by the Jets via waivers after the Cowboys released him in July 2017. According to Jets reporter Darryl Slater, Whitehead is competing with running back Trenton Cannon for New York’s return duties.

FAU fans might not recognize this name at first, and for legitimate reason. Taylor had a different last name on the back of his Owls jersey; he went by Adarius Glanton during his time in Boca Raton. The fifth-year pro legally changed his last name to Taylor in April to honor his late father, who passed away when he was nine years old. Taylor was well on his way to his best year as a pro in 2017  — even sacking New England Patriots quarterback and league MVP Tom Brady in their Oct. 5 matchup — before a broken leg ended his promising season in December. If he can return to form from his late season injury, Taylor will make a strong case to earn playing time alongside Pro Bowl linebackers Kwon Alexander and Lavonte David.

The former Owl played his first three seasons in San Francisco until he was cut and subsequently acquired midseason by the Chiefs in September 2017. Reaser’s lone Kansas City game appearance came in the team’s final matchup of the season, against the division rival Denver Broncos. He broke up two passes and picked up four tackles in the Dec. 31 contest at Sports Authority Field. Reaser will have an extended opportunity to make an impression this summer following the departure of All-Pro cornerback Marcus Peters, who was traded to the Los Angeles Rams in March.

Wajih AlBaroudi is a contributing writer with the University Press. For information regarding this or other stories, email [email protected] or tweet @WajihAlBaroudi.