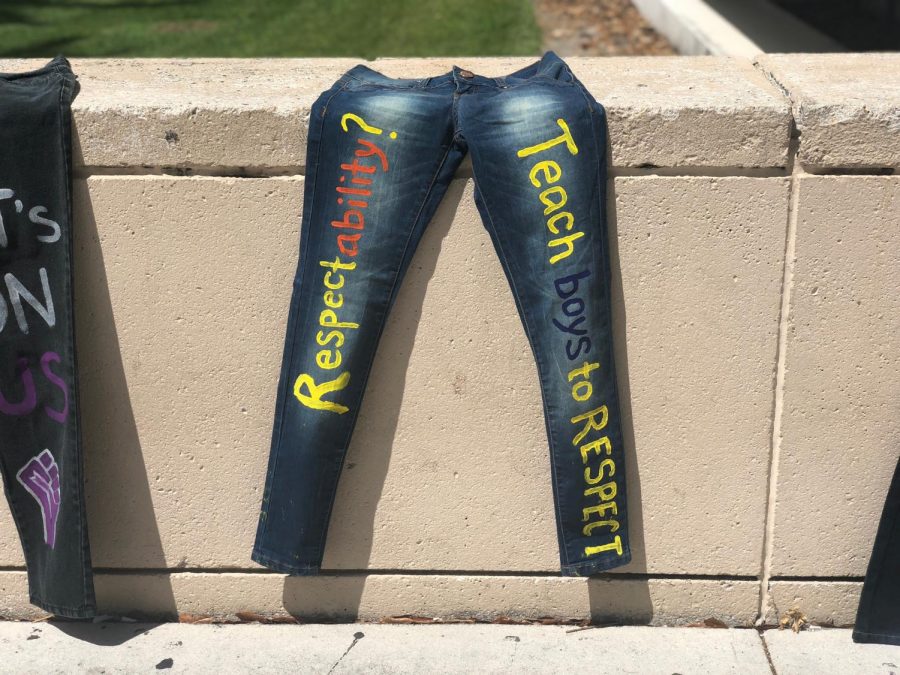 A pair of painted jeans reading "Respectability? Teach boys to respect" was set out to dry in the sun by the library. Joshua Giron | Photo Editor

The back pocket of your jeans may seem like an odd place to find your voice and speak up about sexual assault, but for many it is the perfect symbol for advocacy.

April is Sexual Assault Awareness Month and students in front of the S.E. Wimberly Library received a pair of jeans to paint, their designs showing awareness of the problem. The event was facilitated by the FAU Police Department and the Student Government Peer Education Team.

No tube of paint was left untouched as over thirty-five people participated in the event. Every seat was full, the tables packed with students who hung their statements on clotheslines strung between palm trees.

FAU sophomore and National Council of Negro Women member, Amanda Crews, said she came to the event to “advocate for the women who have been raped or sexually assaulted and do not get the justice they deserved … Only yes means yes.” She was one of many volunteers from her organization at the event.

Denim Day was created after a 1998 Italian Supreme Court overturned a conviction in a rape case based on the argument that the victim’s jeans were “too tight” for the accused to remove on his own, insinuating that she must have helped him and the situation was therefore consensual.

This ruling initiated widespread protests, debates, and advocacy for sexual assault victims, spurring a demand for education on rape culture.

On a wider scale, the Rape, Abuse & Incest National Network found that an American is sexually assaulted every 98 seconds, and every 1 in 6 women has been the victim of an attempted or completed rape. About 80 percent of these victims were under the age of 25 when they were assaulted, reported the National Intimate Partner and Sexual Violence Survey.

Freshman Lauren Smith spoke about her personal connection to this issue, as she was sexually assaulted during her junior year in high school. Smith said she was wearing a regular jacket, a T-shirt, and a pair of jeans at the time of the attack.

“I came out to this event because I saw it trending on social media. I am a big advocate of the idea that ‘no means no’ and the #MeToo movement. I believe that it is not the victim’s fault if they are assaulted, and like many others I questioned if it was for a long time,” she said.

“This is a good event overall. It is my first time doing this. It makes a great point, and speaks volumes,” senior communication major Aaron Wheeler said.

As a member of the Kappa Alpha Psi fraternity, Wheeler said his fraternity will always support events similar to this.

The finished jeans will be displayed as a 3D museum at the library throughout the month of April.

Maria Campos is a contributing writer with the University Press. For information regarding this or other stories, email [email protected] or tweet @mariadacampos.