Despite losing in the February election, Marianne Alex and her Vice President Edward Perez are prepared to fight for the presidential seat a second time. 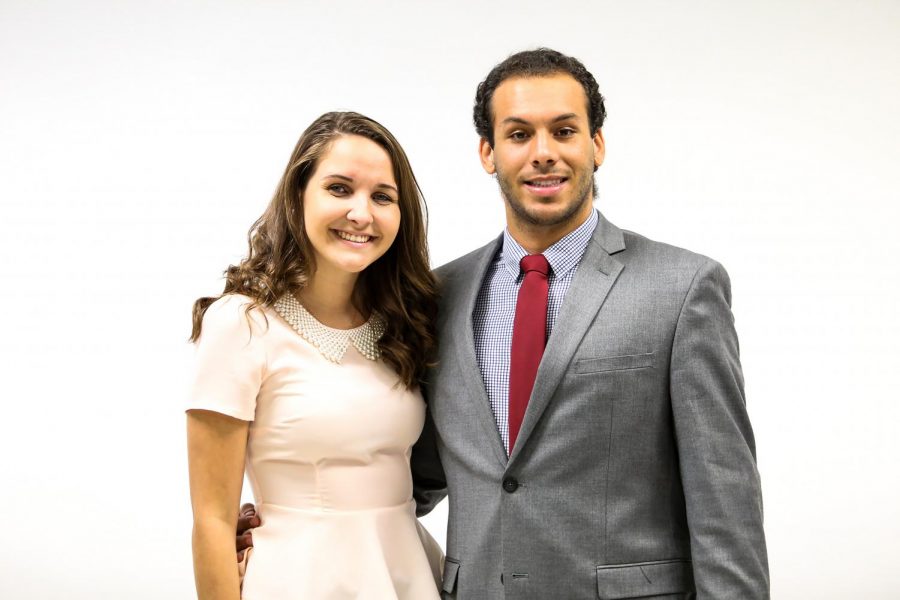 While Marianne Alex may not approve of the special election, she’s willing to go through it again, campaign and all.

Alex, current speaker of the House of Representatives, ran for student body president with her Vice President Edward Perez during the Feb. 27-28 election. They lost by 833 votes, and presidential hopeful Jacqueline LaBayne and her VP Kyle MacDonald were set to take the seats, before an inconsistency arose — the ticket campaigned via a Facebook post 10 days before the assigned campaign period, a “major violation” of SG statutes.

Alex later reported this violation to the Student Court, which disqualified LaBayne and MacDonald from serving. Several weeks later, a special election was called, to be held April 24-25.

“They thought it was all petty and it’s because we lost,” she said. “But in the statutes it says you have to bring up misconduct and anything you see wrong you’re held liable to, so I was just trying to do my job.”

Alex and Perez weren’t on the ballot due to a mix-up earlier in the process when Alex was running as student John Carter’s vice president. Because Carter didn’t have enough credits at FAU to run, the two were disqualified.

Alex and Perez then decided to run, but by then it was too late to submit their names for the presidential ballot. Instead, they became write-in candidates, where students have to write their names on the ballot instead of simply checking a box with their names.

This, they argue, gave LaBayne and MacDonald an unfair advantage.

In light of these developments, the UP met with Alex and Perez to ask them a few questions about their outlook on the situation.

UP: Why did you first decide to run?

Alex: Ever since I started Student Government freshman year, I always wanted to help people. It’s just kind of my character. I really do like helping people and bettering people’s experiences and stuff like that, so that’s pretty much been my whole experience in Student Government … taking criticism from students and actually doing what they want.

Perez: I wanted to be that outsider that had no background in politics or anything … This is my second administration while I’ve been on campus and … I haven’t really seen Student Government do much for the students, so I wanted to come in as the outer person, the outside man, to bring in change. I don’t really want to see another two-term group or two-term person that I still haven’t really seen have any difference whatsoever. We’ve visited the other campuses, and they’ve told us that they don’t have any contact with the executive branch here at all … They feel like they’re excluded from a lot of things, and I want to bring them into everything.

UP: Do you think you and Perez should win the special election over LaBayne?

Alex: I think our integrity and our character is different from theirs … I think we are for the students, and obviously neither of us are political science [majors]. I don’t think I’m going to have much of a political career after college, so I think that speaks volumes to why we’re actually doing this.

UP: How do you feel about administrators like Corey King and Donald Van Pelt supporting this special election?

Alex: It upsets me deeply. We have the law on our side, really, and it’s just completely being thrown out the door.

Perez: I know Donald [Van Pelt] means well, and I know he’s back and forth with it kind of, but King… Had Donald made the decision or something as our adviser, then it would’ve been a little different, but having it come outside of Student Government [from] someone who … almost made a rash decision, I don’t know. It’s kind of going against the whole court, going against everything that Student Government is based upon.

Alex: And [Dr. King] says he’s all for the students…

UP: Is there something about Student Government that allows something like a special election to happen?

Alex: I absolutely think that next year, whoever wins needs to revamp our statutes entirely. I think they’re very vague, I think they’re open to whatever interpretation you kind of want to go to, especially the Election Board, because … with the new technology we have, it’s such a grey area that whoever interprets it can be like, “Oh, well that’s not illegal,” [or] “Oh, that is illegal.” … It is a nightmare for us, for administration, and for Student Government in general. We’re pretty much going to be in a government shutdown if we don’t have a president pretty soon, and it’s pushing whoever’s getting elected weeks behind hiring and getting the ball rolling.

Perez: I just don’t get the whole “special election” part of it … Delaying it completely all the way until finals really doesn’t make sense because then now the Elections Board will make the decision on who wins that Friday … and that’s during finals.

UP: One of the arguments going around Student Government is that the students should have the right to choose who represents them, and despite LaBayne and MacDonald’s major violation, they still won. How would you respond to this argument?

Alex: I think we were never on the same playing field, so them bringing up the fact that they won by 800 votes means nothing to me, because we weren’t on the ballot, we were not given the same chance … I think the fact that we even got so many votes that we did is miraculous.

Perez: Especially in such a short period of time.

Alex: Yeah, we campaigned for maybe a week and a half? Ten days? … I completely agree that students should be able to choose who they are represented by, but there are rules and there are consequences to those rules, and if they’re going to [violate those rules] just in the campaign process, what are they going to do in office?

Perez: I have no issue with the special election, just the main issue of the timing … It’s almost saying, “OK, you can break the rules, but you can run again.” It’s just weird.

UP: What would you like the student body to know?

Alex: Yeah, we are. We’re very grateful that we get the chance to at least be on the ballot this time, and hopefully [the students] come out and vote even though it is during finals, because we’ll be out there.

Perez: This is going to be the most fair election this time.