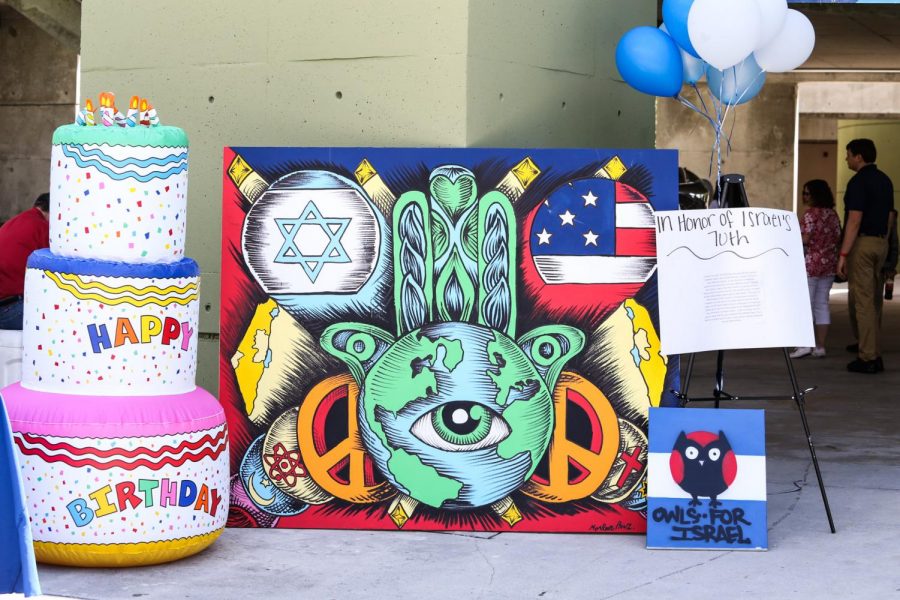 Decorations were set in front of the Social Science building for the celebration of Israel's 70th birthday. Alexander Rodriguez | News Editor

Underneath the shade of the Social Science building, students passed by clusters of blue and white balloons leading into a celebration of Israel’s 70th birthday and culture.

Hosted by Hillel of Broward and Palm Beach, Owls for Israel, and the Jewish Student Union, Thursday’s event was comprised of four themed tables, each centered around a city in Israel  — Beer-Sheva for cultural music, Jerusalem for facts about Israel, Tzfat for different cultural groups in the country, and Tel Aviv for LGBT rights.

Hillel is a nonprofit organization that acts as the home for Jewish students on campus, said Or Greenwald, a Hillel employee present at the event. The Jewish Student Union is a group under Hillel’s umbrella, and involves students in educational and religious programs on campus.

Whether students dug through a sandbox for Israel-themed “swag,” or made a bracelet that represents home like Israel does for so many people, they were eventually led to free Israeli food like “shawarma,” where non-pork meat is stuffed into pita bread.

“I think it’s really important on campus that people are immersed in different cultures, and I think what’s so special about being able to celebrate Israel on campus is that we are one of the most diverse campuses in Florida … and Israel is one of the most diverse countries in the Middle East,” Owls for Israel President Lindsey Sigal said. “To be able to bring something so similar on that and something that we celebrate on campus every day … I think it’s really cool.”

Owls for Israel is a cultural organization that serves to educate students on Israeli culture and history by immersing them in interactive programs.

“That’s very important for us, as students, to be accepting of other people. It does not matter, their different cultures, but get to learn and understand and have empathy,” agreed Shalom Caldwell, a pre-med graduate student who was at the event.

Leah Avni, president of the Jewish Student Union, feels that there are many things people don’t know about Israel and that events like this help spread knowledge.

One fact that people may not know is that Israel is heavily involved with technology and LGBT rights.

“It really is the hub for innovation, for medical advancements, it’s known as a start-up nation … Every summer [Tel Aviv] does a huge Pride festival and it’s known as the gay capital of the Middle East … There’s just so much that comes out of Israel to around the world,” said Sigal.

Owls for Israel teamed up with Lambda United, a student organization serving the LGBT community, to host the Tel Aviv table.

Although Israel is a young country, Jewish culture and religion are among the oldest in the world, said Greenwald. He grew up in Tel Aviv, and added that this 70th landmark “has massive impact.”

There are also many Jewish people that live in Boca Raton and go to FAU, so events like these are a good way to connect them to their heritage, he said. According to Forward, Boca Raton is the third largest Jewish metro area in the U.S., placing behind New York and Los Angeles, respectively.

“We are such a resilient country. After so much people trying to have us not be there and so much defeat, we still are standing and we’re still prospering and giving to all different types of people and really helping our world and not just Israel,” Sigal said.