Bolsova is undefeated in singles play with a record of 17-0 while maintaining a 3.8 GPA average. 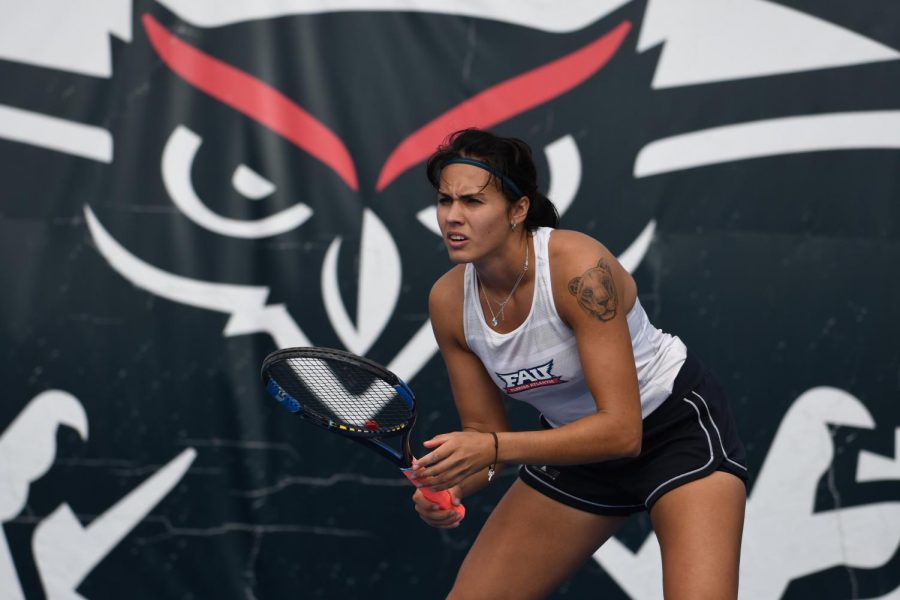 Sophomore Aliona Bolsova first picked up a tennis racket when she was six years old, to the delight of her two Olympic athlete parents.

Since that day, she has travelled all over the world playing in a variety of tournaments, going as far as the quarterfinals of the 2015 Australian Open Junior Championships.

She is currently undefeated in singles play at FAU with a record of 17-0 and has achieved the ranking of No.2 singles player in the country—and she’s not done yet.

Bolsova, who was born in Moldova in 1997, moved to Spain when she was just two years old because Moldova was “not the best country to get opportunities to be the best athlete.”

It was in Spain that Bolsova became inspired to play tennis after seeing Maria Sharapova win the Wimbledon tournament in 2004.

Bolsova spent almost a decade in Spain, splitting time with school and playing tennis. She then spent one year at Club Med Tennis Academy in Port St. Lucie, Florida before returning to Spain to finish high school while also practicing with the Royal Spanish Tennis Federation.

Soon after, Bolsova decided she “didn’t want to play anymore” and quit to pursue a degree through a scholarship in Fashion Design and Production at Oklahoma State University

While at Oklahoma State, she was convinced to play tennis again and accumulated a record of 31-7 overall in singles play. Her 31 wins are the most ever for any freshman girl in Oklahoma State history.

She also maintained a 4.0 GPA and was named to the Academic All Big-12 Rookie team.

She transferred to FAU after having a conversation with women’s tennis head coach Marcy Hora-Cava whom she “had a good feeling about really got along [with].”

So far, that decision has paid off as she is currently undefeated in singles play while ranked the No.2 singles player in the nation, according to the Intercollegiate Tennis Association.

She is also 10-2 and ranked 55th in the country in doubles with her partner freshman Jemi Aguilar.

“I didn’t really have any expectations,” said Bolsvoa. “I just wanted to get every possible win for this school, for everything that they are doing for me.”

When they’re not on the court together the two doubles partners like to go out to eat and watch movies together, according to Aguilar.

“It helps a lot on the court. It just shows off the communication and the bonding you have,” said Aguilar.

Whenever she’s not playing tennis or studying, Bolsova says she can be found either reading, writing, or drawing. She prefers crime novels and history books, which is why she changed her major to history after transferring this past year.

In her first semester at FAU, Bolsova earned a GPA of 3.8 and currently has all As in her classes. She’s managed that while playing several professional tennis tournaments overseas.

“You just have to put in the work,” Bolsova said. “…It’s time management, and coffee, a lot of coffee.”

All of that coffee and hard work led to Bolsova becoming one of the six honorees named to the Conference USA All-Academic Women’s Tennis Team, a distinction given to students excelling in academics and tournaments.

Despite being highly ranked both domestically and internationally, that doesn’t affect Bolsova, said Aguilar and coach Hora-Cava.

“She really doesn’t care if she’s ranked or not,” Aguilar said. “She is still going to work as hard. She is going to give it her all every time.”

“She has zero ego…she doesn’t care if she gets awards,” says Hora-Cava. “She doesn’t pay any attention to it whatsoever. She doesn’t think she should be treated differently. She just kind of minds her own business and wants to do well for herself and her team.”

Hora-Cava also notes that Bolsova’s work ethic and drive is “contagious” with among team.

“It helps motivate you because you see her even though she’s ranked, she’s a good player… but she doesn’t stop just because she’s good. She wants more,” Aguilar said.

Hora-Cava, who has been the head coach at FAU for nine years and coaching for over 20 years, believes Bolsova is “on a whole other level physically and mentally.”

She said she hopes to meet another person like Aliona on and off court the court but that it’s “probably once in a lifetime.”

After graduating from FAU, Bolsova wants to play tennis professionally and improve upon her world ranking of No.412.

Before she leaves, Bolsova said she wants to make the best of her time at FAU.

“I want to do everything I can for this team to win everything that is possible.”