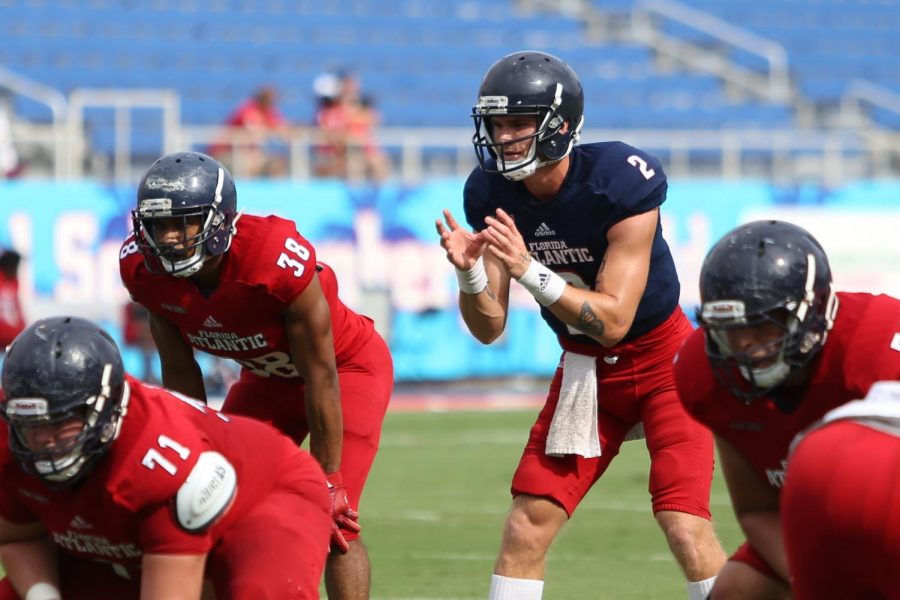 FAU redshirt freshman quarterback Chris Robison (2) waits for the ball to be passed during the second half. Alex Rodriguez | News Editor

he first traditional red versus white spring game of the Lane Kiffin era ended in a 20-17 victory for the red team.

Redshirt freshman quarterback Chris Robison led the red team, consisting of the second team offense and first team defense, to a 20-7 lead early in the third quarter before redshirt junior De’Andre Johnson mounted a comeback that fell short in the closing seconds of the game.

Junior running back Devin Singletary was out for the game with an injury, so redshirt senior Gerald Hearns got the start in his place for the white team.

Hearns fumbled the ball early on in the first quarter, which was recovered by junior linebacker Rashad Smith of the red squad. The red team capitalized on that mistake, eventually going ahead 3-0 after a field goal from redshirt freshman kicker Tyler Gilley.

They added to that lead in the second quarter on the first touchdown of the day, a 29-yard pass from Robison to junior tight end John Raine, to make it 10-0 advantage for the red team.

A 61 yard pass from Robison to redshirt junior running back Kerrith Whyte set the red team up inside the 10-yard line, looking to score once again. Senior running back Silver Saunders eventually punched it in from a yard out to take a 17-0 lead with under two minutes remaining in the half.

“I thought Chris was well poised out there,” said Kiffin. “…His problem wasn’t turnovers, his problem was missing receivers.”

Johnson led the team down the field bit-by-bit, eventually hitting redshirt freshman running back Daniel Leconte for a pass, all the way down to the 1-yard line with one second remaining.

After a timeout was called, Hearns ran the ball in for a score to cut into the red team’s lead, 17-7.

The white team got the ball to start the second half looking to use the momentum they had going for them at the end of the first. It was short lived though, as Johnson was strip sacked and senior safety Jalen Young recovered and returned the ball to the 25-yard line.

The Red squad capitalized on the white team’s turnover once again to take their largest lead of the game, 20-7, following Gilley’s second field goal of the game, this time a 43-yarder.

Sporting a 20-7 lead, third-string quarterback and redshirt senior Connor Miller came in later on in the third quarter for a couple reps with the red squad. His appearance ended quickly, as after going three and out, Johnson threw a touchdown pass to junior wide receiver Jovon Durante to pull the white team within six points.

Robison came back out for the red squad, but couldn’t muster any more points.

Similar to the end of the first half with under two minutes remaining, Johnson led the white team down the field looking to score to win the game.

His comeback attempt was stopped though, as his pass to the endzone on fourth down fell incomplete giving the red team the win, and steak dinner according to Kiffin.

“We’re a defensive team right now,” said Kiffin on what he would take away after the 15 practices this spring.

The Owls begin the 2018 season away from home at the Oklahoma Sooners on September 1.