The low ranking is partially to blame on denied requests for funding from the state of Florida. 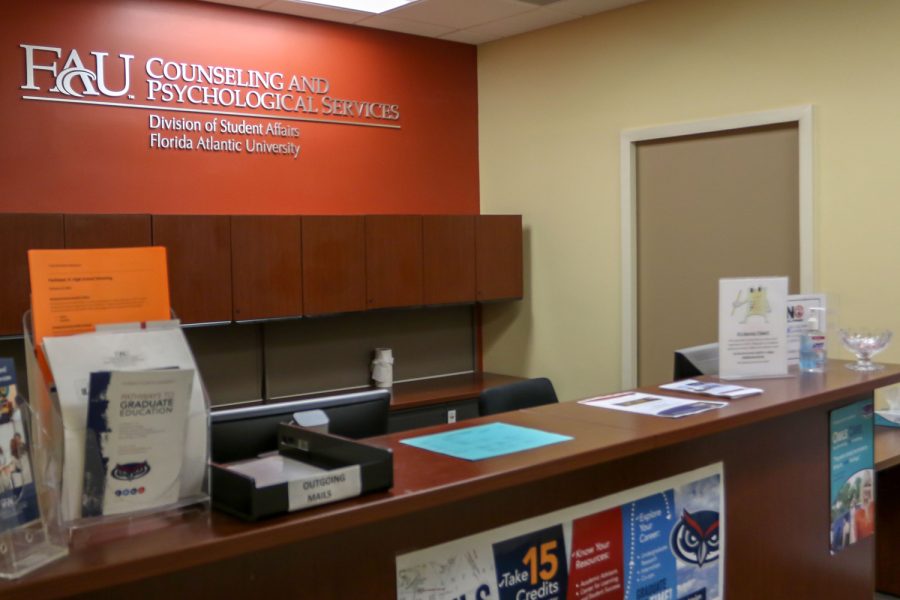 The Counseling and Psychological Services office on the second story of the Breezeway. Joshua Giron | Photo Editor

Across the state of Florida, a need for more mental health funding at universities has been steadily increasing.

And FAU is no different, ranking 9th out of 12 in the state’s public universities’ counselor to student ratio.

“That has been a problem with FAU for a long time now, and the issue isn’t with FAU but with the state not funding us,” said Active Minds President Onur Basman. “They don’t have enough money right now to get the counselors. They also don’t have space to put them.”

Basman said his organization works with FAU’s Counseling and Psychological Services office to bring educational programs, team-building activities, and other mental health resources to the university. He added that he views CAPS assistant vice president Kirk Dougher as his mentor.

Dougher said that the Board of Governors requested a $14.4 million mental health counseling budget for Florida’s public schools in the 2017-18 year — out of which $1.6 million would have gone to FAU — but the proposal “found no traction in the legislature … So there were no dollars coming that way.”

The board did set out to balance the number of counselors that Florida public universities have however. While FAU currently has 28 counselors along with six graduate student therapists, their respective hours all add up to the working time that 17 full-time counselors would have.

And to meet the board’s demands, FAU will be hiring more mental health employees in the next year to improve its counselor-to-student ratio.

According to the International Association of Counseling Services, the ratio of college counselor to student should be around 1:1,000-1,500, but as of 2017, FAU’s ratio is 1:2,014 , a good 500 above the upper reaches of the goal, reported the Board of Governors.

But by the end of fall 2018, CAPS should have a counselor-student ratio of 1:1,000-1,250. CAPS has expanded three times in the last six years, but will need to expand yet again to make room for the new positions, said Dougher.

Dougher said that this increasing need for mental health resources stems from stress carving a path for anxiety to slide in through, which is closely followed by depression. Although, Basman credits it to the nature of college itself —  brand-new environments, crowds of strangers, unfamiliar class styles, and different learning methods.

“You have to manage your time better, and most people aren’t good at that at first. It’s a lot being thrown [at you] at once,” he said.

His club recently aided with the Out of the Darkness suicide prevention walk at the Boca Raton campus, which raised over $14,000 for the American Foundation for Suicide Prevention.

Despite any organization’s efforts, however, the numbers continue to pile up.

Baker Acts, in which a person is hospitalized for a mental health evaluation and subsequent treatment on a voluntary or involuntary basis, have been on the rise, with 11 occuring in the last two months alone according to FAU’s police records.

In the meantime, though, steps are being taken to make the best of the resources the university currently has.

An upcoming Student Government program, dubbed “PEP Talk,” has a two-step goal: to educate students about mental health and to reduce the stigma associated with such subjects, said Student Government Gov. Der’Resha Bastien, who’s spearheading the initiative. She added that as of right now, the program doesn’t exist on paper, but aims to be a middle man between students and CAPS.

Other focused topics would be diversity and internationalism, a “multi-disciplinary approach” in which biological, psychological, and social factors would be taken into account with mental health, and “sociological imagination,” the ability of students to see how society impacts their lives, she said.

The program would have a director, associate director, and mental health ambassadors. Bastien said that not only would this pave a way for students in social science fields to obtain professional experience, but it would also take some of the weight off of CAPS.

“One thing that I noticed when I was a peer coach, [learning communities] would request CAPS to come out a lot, but little do people know CAPS doesn’t have the up-to-date ratio that they should … so if you have CAPS officials who have Ph.D.’s out there tabling and promoting and providing workshops, they’re spending clinician hours when they should be with the students instead,” she said.

If students were the ones tabling and raising awareness, however, not only would CAPS be under less pressure, but program members would be able to connect with fellow students as well.

According to a Student Government survey, 98 percent of those polled said they would be more likely to utilize CAPS if put in contact with a student about it, Bastien said.

Another benefit of the program would be the fact that it’s through Student Government instead of CAPS, an unusual layout that Bastien believes would give students more power.

“If a student doesn’t have the autonomy to go to their supervisor and say, ‘Hey, this is something that the students are complaining about,’ it won’t get done, versus them being afforded that autonomy in Student Government,” she said.

Bastien has been working on the proposal since January 2018.

“There were so many talks about mental health … a lot of students had issues with it. I remember when I was running to become governor I knew a freshman student who committed suicide … so I made it a part of my platform to make sure that students have an overall good sense of wellness, so not just their body, but also their mind,” she said.

The roadblock with the plan, however, is a familiar one: lack of funding.

Bastien brought the case up to the Campus Budget Appropriations Committee, but the request was denied, forcing her to look for money in other places for the 2018-19 fiscal year.

CAPS has been on campus for more than 30 years, said Dougher, but you’d never guess it.

Basman would seem to agree.

“Most of our students don’t even know we have a dentist on campus. They don’t even think about mental health,” he said.  “Right now, 1,100 students die from suicide every year … 1 in 4 college students are diagnosed with a mental health disorder. I think the problem is not if we have it, but we should start talking about it and trying to eliminate it.”

Campus counseling across the state: FAU lags behind

The Florida government put together 2017 stats comparing public universities’ counselor-to-student ratio. And it turns out, FAU only ranked 9th out of 12.

The lower the number of students to a single counselor, the better.

State data shows that the number of students taking advantage of counseling services at universities has gone up by 55 percent since 2008-09.