Through his works, the American poet focuses on making people laugh. 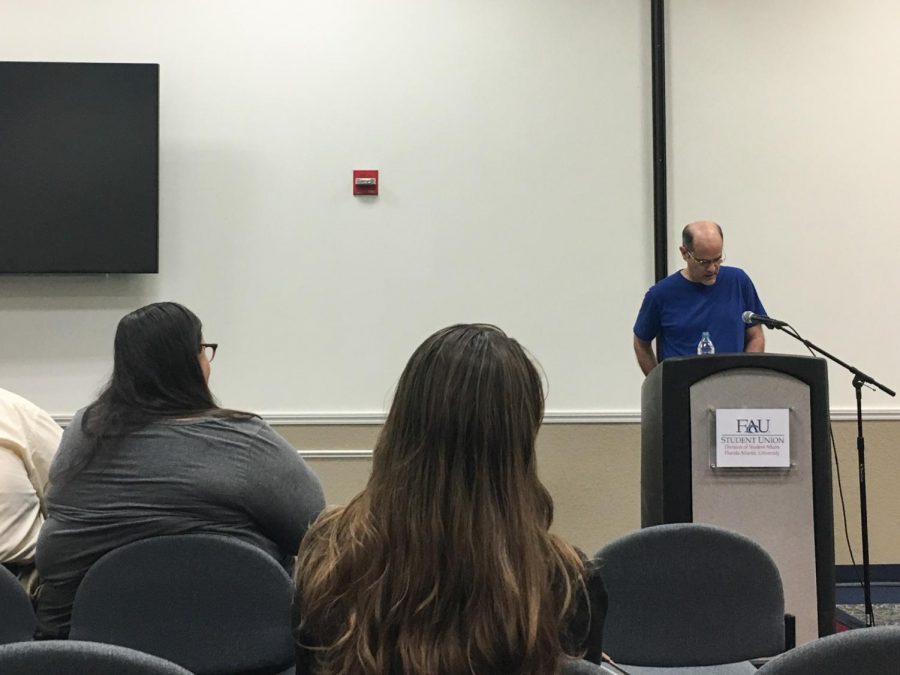 Bob Hicok teaches students about humor in poetry as well reading some excerpts from his work. The Virginia Tech professor came to FAU last Thursday.

Bob Hicok began writing poems when he was 67 years old.

“Just kidding, I was about 20,” the award-winning poet joked with his audience to break the ice before reading his poems.

The 58-year-old guest speaker spoke with students interested in poetry last Thursday as part of a College of Arts and Letters event.

That humor jutted out of the 15 poems Hicok read aloud in front of the packed Student Union Majestic Palm Room.

The Virginia Tech professor is the recipient of Guggenheim fellowships and Pushcart Prizes, which are awarded to those who demonstrate “exceptional creative ability in the arts,” according to the John Simon Guggenheim Memorial Foundation website.

His work has been included in five volumes of Best American Poetry and began his teaching in 2002.

Susan Mitchell, an English department professor, introduced Hicok and shortly after she joined along with the rest of the diverse crowd to hear Hicok read.

After his readings, Hicok explained the inspiration behind some of his poems. “Poem that Walks from Fact to Wish” was about the time he shaved his head in Seattle, which “led to a weird experience. I don’t know why I chose to do that in Seattle,” Hicok said.

Two poems later, Hicok dedicated “If It’s Not Fixable, Don’t Break It” to his neighbors clumsily attempting to turn holes into into ponds in their backyard.

Although most of his poems came off light-hearted and conversational, some were surrounding heavy social topics. In “We’ve Come a Long Way Toward Getting Nowhere,” he tackles the matter of the way humans are cruel to each other when it comes to race, religion, and more.

“My Jewish problem is figuring out why America in 2016 has a dab of 1930s German fascism to it, people at political rallies yelling crap about the Jews,” an excerpt Hicok pulled out from ‘We’ve Come a Long Way Toward Getting Nowhere.’

Discussing the poem later, Hicok said “we do this [discriminate] to each other constantly.”

Several poems, and even an entire poetry book of his titled “Sex & Love &,” were dedicated to his wife, who also works at Virginia Tech.

Following his poems, Hicok answered questions from the audience, many of which revolved around how he smoothly weaves his witty humor into his work.

“My poems didn’t work until I started using [humor],” Hicok said. “It’s just one of the ways we look at things.”

Hicok wrapped up the night simply professing his love for writing.

“I write every day, some people need pressure, but I go at it every day,” Hicok said. “My material is my life.”

Kristen Grau is a contributing writer with the University Press. For information regarding this or other stories, email [email protected].