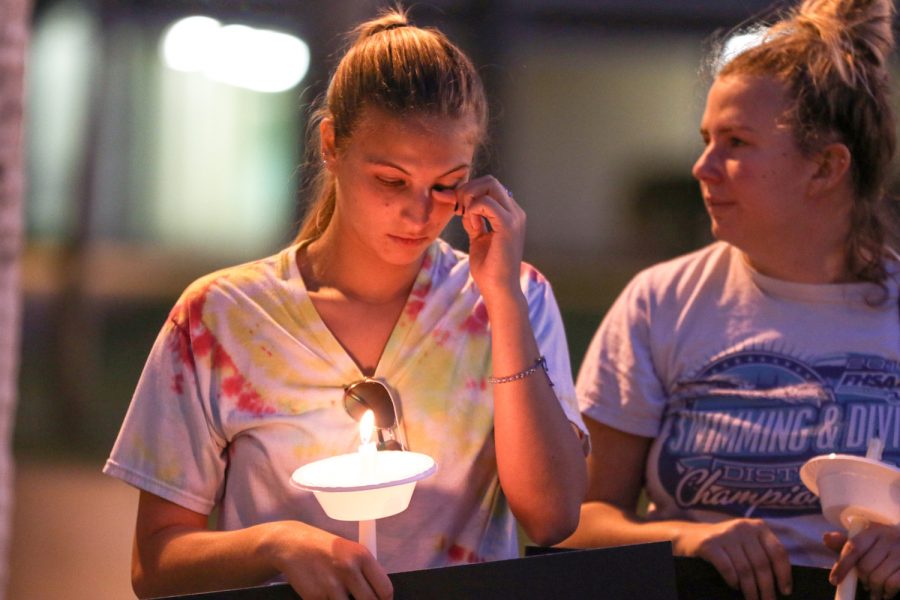 A student wipes away a tear during a Parkland shooting vigil held on the Boca campus March 16. Joshua Giron | Photo Editor

It’s been a month and a half since the shooting that killed 17 people at Marjory Stoneman Douglas High School, and in that time, a glimmer of hope has emerged that something will change.

People are flocking to the streets in protest — an estimated 1 million students took part in a national school walkout March 14, according to the Wall Street Journal, and hundreds of thousands participated in the March for Our Lives March 24. The marches honored the shooting victims and spread a message about gun violence in America: “enough is enough.”

“After Sandy Hook … why haven’t we learned our lesson?” asked Madie Tolchin, a senior sociology major who marched to the Boca campus Free Speech Lawn March 14. “I’m more ready to get things changed than ever.”

The Free Speech Lawn was also utilized on March 22 for a “die-in,” where people laid on the ground as if dead in a form of protest. And in less than a week, a panel of local candidates will discuss the campus carry debate and recent legislation April 4, said President of the FAU College Democrats Marina Braynon-Moore.

According to a poll conducted by the College of Business, the Business & Economics Polling Initiative (BEPI) found that 70 percent of Floridians were in favor of stricter gun laws. The poll surveyed 800 people in the state between February 23-25.

The $400 million bill is the first successful gun control act in Florida in over 20 years, as reported by the New York Times, and the nicknamed “Gunshine State” seems to be on course for further change. The bill tightens gun control but will also arm some teachers throughout the state.

This gradual change, however, does not come without its fair share of debates, and many narratives are at the forefront of the national conversation.

The new bill has set aside more than $69 million to bolster the mental health counseling budget in schools, mirroring the overlying opinion that mental illness is largely to blame for most mass shootings.  According to the BEPI findings, 24 percent of those polled believe that mental healthcare is sorely lacking in Florida, greatly contributing to the now-chronic issue of gun violence.

Robert Cierro, a junior communications major, believes that the situations are definitely tied together.

“I believe a mentally healthy person would never, ever think about going out and killing tons of people … If we’re going to have an atmosphere where this thing can happen because you don’t want to take care of people who are mentally sick in the proper way, then we have to have gun regulation,” he said during the FAU walkout.

It goes beyond that, though — for him, the consumerist nature of media and advertisement have a “huge effect” on people’s mental states, heightening depression while the already poor treatment levels stay the same. The issue is also “more or less what we value in the country.”

College Democrats President Braynon-Moore agrees that mental health is a piece of the puzzle, but not the defining factor of the issue.

“We shouldn’t be denying that people who are willing to hurt other people and take their lives, they have some issues that need to be dealt with by a doctor. That should be included in a background check get a gun … But that doesn’t take away from the fact that our lax gun culture in America is also what causes this almost constantly,” she said.

And to some, mental health isn’t the issue at all. Take Tolchin, who says that people with mental illnesses are more likely to be a victim of gun violence than to cause it.

“I think people mistake mental illness with it being a white male problem. It’s white men who are typically doing these mass shootings. I think it’s these men [that] feel entitled and are frustrated, and the shooting at Stoneman Douglas was a white nationalist … Yes, I agree, let’s have a conversation about mental health, but this isn’t what’s causing it,” she said.

BEPI pollsters found that 18 percent of participants believed that a growing trend in shootings can be attributed to graphic violence depicted in TV shows and video games.

Geoffrey Stephen, a biology major and FAU High School student, is a resident of Parkland, Florida. He was an acquaintance to four victims of the shooting and thinks violent video games do play a part in the national epidemic.

“Gaming and TV has a lot to do with current society. It has the capability to morph a person’s mind — the younger you start, the more wired you become … The more violent the game is, the more violent their [thoughts are],” he said. “What makes this even more of danger is how easily accessible the weapons they see on these games [are].”

Others, however, are not convinced. Braynon-Moore is one of these individuals.

Olivia Hemmingway, 15, is another FAU High student turned activist when the recent shooting killed one of her best friends. She immediately became involved, attending seven vigils and a protest at the Broward Courthouse Feb. 17, where Stoneman Douglas student Emma González delivered her now-viral speech.

“It’s really a big closure thing, and also just knowing that you don’t want that to happen to anybody else, the pain. We felt so broken,” Hemmingway said.

She argues against Trump’s video game argument as well, calling it an “easy way out of the solution.” To her, it shows that he “really doesn’t want to change the gun laws … which makes me kind of sick, because people have passed away miles away from my house and nobody is doing anything about it.”
Background Checks & Semi-automatics

Though Senate Bill 7026 addresses multiple concerns, two things it doesn’t do are ban semi-automatic weapons and improve background checks. Within the BEPI results, the ban of assault-style rifles are preferred, voted for by 69 percent.

Tyler Gidseg, a College Republicans officer, is in favor of strengthening mental health testing, but believes that the background check already in place is a “pretty comprehensive process,” and “substantial in terms of vetting someone.”

“I actually do own a gun, and I’ve been through the process of obtaining it… You go into the dealership, you pick out the gun you’d like, and, in order to buy it, you need to fill out a 4473 form, which of course you have to answer everything correctly,” he said. If anything is incorrect on the form or if a felon is trying to purchase a weapon, they can spend up to 10 years in prison.

The new bill calls for at least a three-day waiting period between requesting a gun purchase and actually receiving the gun, and “During that time, they’re going to be looking at you and determining whether or not you can qualify to purchase the gun,” Gidseg said. The dealer calls the Florida Department of Law Enforcement and the FBI to get a National Instant Criminal Background check on the buyer as well, he said.

Gidseg argues against outlawing the AR-15, saying that pistols kill six to seven times more people than AR-15’s do, according to the Wall Street Journal. Knives and blunt objects are also tools used to murder far more people than semi-automatics, he said.

“I think what they’re doing is cherry picking an issue that doesn’t necessarily hold salience as compared to all those other things,” he commented on the idea of banning the weapons.

Hemmingway’s ideas on the legalization of weapons have tightened since the shooting.

A controversial portion of the recently signed bill is its “marshal” program, aptly named the “Coach Aaron Feis Guardian Program” after the coach who died saving students from a barrage of bullets with his body. This program trains and arms some teachers, such as librarians and coaches, if the local school district and local sheriff’s department are involved.

The BEPI poll found that 31 percent of voters support the arming of teachers.

“If that football coach would’ve had something besides his body to protect the students … He died a hero, but he could’ve possibly been a little more effective with more means of protection,” said Brandon Walker, president of the College Republicans. “[Teachers] are already on campus, so they can get there a lot quicker than anybody else can and they can take care of the issue.”

“Israel does have a program in case where they do have teachers that are armed … you don’t see or hear of any school shootings over there,” added Gidseg.

Braynon-Moore, however, argues that we already have police officers on campus, which should be “more than enough.”

“Teachers, their job is supposed to be to teach students. How is a student supposed to learn and ask freely and feel comfortable when their teacher is armed?” she said.

She also pointed out that minority students are more likely to be harshly disciplined than white students, so, “What happens when you add a gun in a classroom?”

“I don’t think the solution for gun violence is by providing more guns,” Stephen also said. “If you want to deal with violence, you don’t want to create more violence… If you look at Ghandi, or if you look at Martin Luther King, these people made the most difference. You could set out in the old fashioned way, an ear for an ear, and eye for an eye, but that’s just going to leave you with two people without ears and eyes.”

Rates of political divergence are higher than ever. According to findings from the Pew Research Center, Americans with consistently Republican or consistently Democratic views have doubled from 10 percent to 21 percent over the last two decades. Negative views of one party to the other have also more than doubled, causing heavy disagreements on important issues, like gun control.

“It’s very divisive. You turn on the news, and you have some fringes that are created from this… I think both sides want the same thing, of course, we want this to end, we just have different paths of getting there,” noted Gidseg.

Braynon-Moore believes that it creates a harmful “us v.s. them” mentality in which both sides dehumanize the other, sticking to their radicalization of politics instead.

“It doesn’t help either side, because without our counterpart across the aisle, we can’t get anything done,” she said. “That means we have to work together and find common ground to save and protect our children, and just regular Americans.”

In an attempt to combat the divisiveness, College Republicans and College Democrats will occasionally play a game of kickball together, striving to see each other as peers instead of rivals.
Going Forward

Life is different for Hemmingway and thousands of others whose lives have been changed by the Parkland shooting.

“One of the biggest images that will stick with me is seeing my best friend’s casket being carried away, and knowing that because of someone’s senseless acts of violence that could’ve been prevented, that she’s never going to be able to live out her full life,” she said. “What I want people to know is that our generation is going to be the one to … make them understand that it’s not just an issue between your party or your family’s beliefs, but it’s really an issue of life and death.”

For the everyday hero, Tolchin has a suggestion: get out and vote in both local and national elections.

“If you care about these issues, become politically engaged.”