Less than 9 percent of the student body cast their votes for SG president. 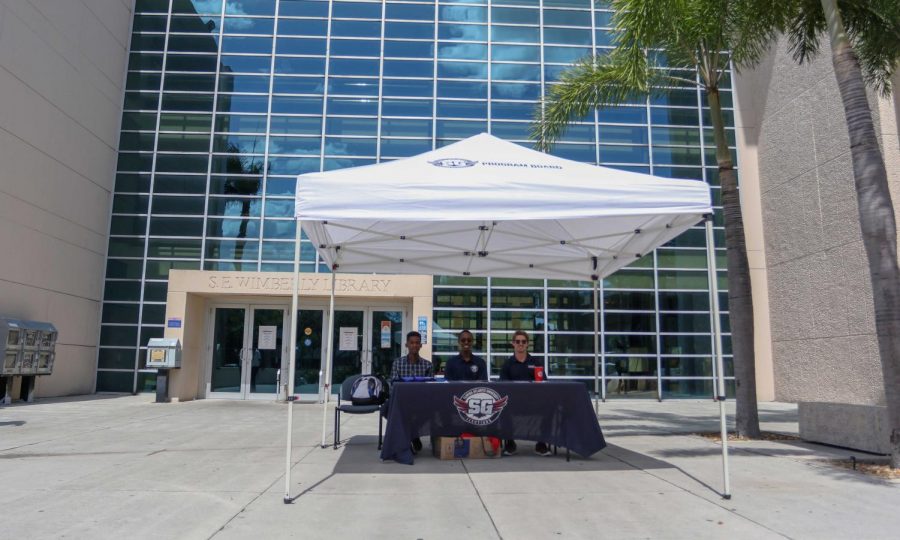 Student Government members encourage students to vote on their way to the Boca campus Wimberly Library yesterday. Tents where students could vote via Owl Central on iPads and laptops were present on the Boca, Davie, and Jupiter campuses Tuesday and Wednesday. Joshua Giron | Photo Editor

Over the course of the past two days, FAU’s student body chose the new faces of Student Government leadership.

Tents dotted the Boca, Davie, and Jupiter campuses Tuesday and Wednesday as students waited in line to vote via iPads and laptops on Owl Central.

Jacqueline LaBayne won the race for university-wide president alongside her running mate Kyle MacDonald. The two will oversee the Boca, Davie, and Jupiter campuses.

Luke Turner will be the next Boca governor, while Maria Flavia Patino-Paul and Nicholas Tyndall will serve as Davie and Jupiter governor, respectively.

Along with LaBayne and MacDonald, the three governors will serve from May 2018 to May 2019.

Presidential hopeful Abdel Rahman Eltawil and his running mate Christopher Acosta received 275 votes, while write-in presidential candidate Marianna Alex and her Vice President Edward Perez received 498 votes. The two weren’t listed on the ballot because they entered the race after the “declaration of candidacy period.”

Labayne and MacDonald received 1,331 votes, more than half of the total votes cast.

“Voter turnout was better from last years election but there’s always room for improvement, hopefully it continues to increase over the next couple of years!” LaBayne said via text. “I feel amazing, and proud to know that the students believe in my vision for FAU and extremely blessed to be given the opportunity to continue serving the FAU student body, were just ready to hit the ground running! Go owls!”

This will be MacDonald’s second term as vice president, after serving under President Emily Lawless.

“I am very excited for the upcoming year and I’m glad I get to continue my work,” MacDonald said via email. “In terms of voter turnout it was better than last year which is amazing but there is always room for improvement. Hopefully, voter turnout will continue to rise in the coming elections.”

Below are the unofficial results of the governor race at each campus:
Boca governor race results:
Campus population: 25,727 students

“Voter turnout was incredible this year, I’m really proud of the student body for being so civically engaged,” Turner said. “I’m so grateful for the student support and I’m thankful to those who helped out on my campaign to make it a success.”

The official results will be finalized and released once all challenges, termed “contestations,” have been settled.

If the Elections Board receives any contestations, a hearing will be held tomorrow at noon in the Student Government conference room on the second floor of the Student Union.

The University Press reached out to newly elected Davie Governor Maria Patino-Paul and Jupiter Governor Nicholas Tyndall for comment but did not receive a response as of publication time.