Owl of the Week: Hannah Herbst

Meet the 17-year-old inventor who plans to bring clean energy to countries in need. 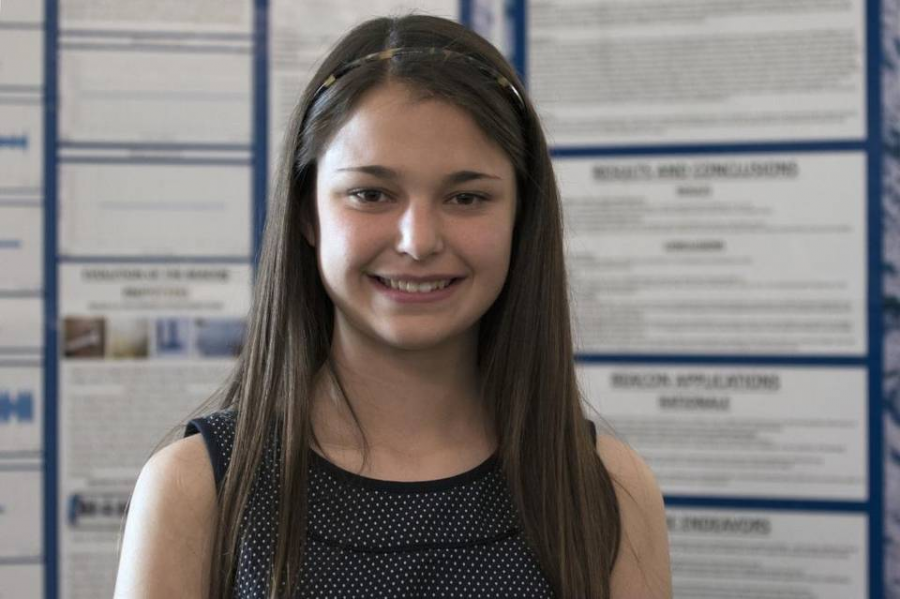 This story is part of a recurring feature meant to highlight members of FAU who are accomplished in their field, i.e. leaders, entrepreneurs, creators, etc. If you would like to nominate someone for Owl of the Week, email Features Editor Hope Dean at [email protected] Students, faculty, and staff are all eligible.

Hannah Herbst’s laptop is covered with an assortment of stickers, the decorations overlapping each other at every turn.

A marine robotics company logo stands out at the top left, while the MIT mascot Tim the Beaver waves cheerily from below it. Two Google emblems are on opposite sides of the laptop, while between them lies an international engineering fair sticker. “A Destination: Mars” sticker styled like the NASA logo covers the bottom right, opposite from “The Beauty and the Beast” and “Hamilton” stickers.

And, finally, a sticker right by the laptop’s classic Apple logo brandishes three words from the Harry Potter series: “Yer a wizard.”

These stickers may suggest some things about Herbst, but could never convey the entire picture — at 17, she’s already invented a prototype that has the potential to generate clean energy via ocean waves, met former President Barack Obama and Bill Nye, and spoken at events all around the world.

In 2015, Herbst competed in the Discovery Education 3M Young Scientist Challenge and won the title of ‘America’s top Young Scientist’ for her prototype, which costs $12 to make and is made from recycled materials, according to Business Insider. The propeller of the device is turned by the powerful waves of the ocean, and this movement is converted to usable energy.

When Herbst was in seventh grade, she attended an engineering camp at FAU as the only girl in the program — and at first, she was not a fan of it.

“After a few days of programming I guess it was the competitiveness that really got me into it,” Herbst said.  “[I was] looked at and told ‘you can’t do engineering, you’re a girl who likes theatre and sports’ … I guess I just figured out, you know, I can. And I love it.”

Herbst’s idea for the ocean energy probe originated from her background growing up in Florida and being surrounded by water.

“I was at the Boca Inlet fishing off of the pier … and I saw this enormous boat be just completely turned around by the current. I was like, ‘well, that’s a lot of power not being harnessed,’” Herbst said.

Another factor that inspired Herbst to act was her 12-year-old pen pal, Ruth, who lives in Ethiopia. Ruth lives in energy poverty, along with 1.3 billion other people across the globe, according to Herbst. She wishes to supply feasible energy to these people to provide them with basic resources like lights, sanitation, and education through her prototype.

Herbst currently attends FAU High School, a dual-enrollment program that allows its students to take classes full-time at Florida Atlantic University. This program has made scientific progress much easier to obtain, Herbst said, by connecting her with college mentors and giving her free time between classes in which she can go to the lab and work on her project.

Of course, undertaking such a project doesn’t come without its difficulties.

“I definitely ran into problems all the time, because that’s science,” Herbst laughed. Her most notable current problems are monitoring qualities of salt water around the globe, keeping marine growth from growing on the technology, and insulating the electronics, she said.

Between her pursuits in Science Olympiad, the First Tech Challenge, and various science fairs, however, Hannah tries to keep things balanced. She’s going into her 6th year of soccer and her 3rd year of fencing, two activities that she uses as an “outlet,” Herbst said.

Herbst also participated in theatre when she was younger, which greatly helped her develop public speaking skills, she said. She has delivered speeches and powerpoint presentations at the Social Innovation Summit, the National Science Olympiad Competition, the Discovery Education Leadership Conference, and the United Nations STI Forum. She has also educated others about her research specifically at the 2016 White House Science Fair, the United State of Women, and Intel International Science and Engineering Fair, according to Herbst’s website.

“I would speak at one end of the country on Monday and then another end on Friday,” Herbst explained.

The trick was staying confident and not overthinking the situation, “because what I realized is the only person who knows what I did in that room is me. If I can take what I know and share it with people in the audience … that would be really cool,” she said.

Jeff Emslander was Herbst’s mentor throughout the Discovery Education 3M Young Scientist Challenge, and acted as her “sounding-board” and “advice-giver,” he said. The two would talk weekly and bounce ideas off of each other throughout the process of refining the prototype, and her enthusiasm for the project and how hard she was willing to work to see it through made an impression on Emslander.

“I would be amazed by the research she did, how far she’d taken things in a week,” he said.

A week before the competition, the two were meant to revise her final presentation to make sure it was ready for action. There had been a conflict earlier in the day, so Herbst called him later, when he happened to be out having dinner with his wife.

Once he explained the situation, Herbst immediately hung up. When he opened his inbox later, he found that Herbst sent him an email of her final presentation that they were to review, titled ‘Do Not Open This Until You Finish Dinner.’

“She made a point to be considerate and accommodate that way,” Emslander said.

Robin Barkes, a biology teacher at FAU High and the Science Fair Coordinator, was impressed with Herbst as well. At a Science Olympiad state competition, part of the goal was to make it through a “shark tank” event where the students present an idea and defend it accordingly, Barkes said. Herbst was last to go and presented her BEACON project, the early name for her ocean energy probe.

“At the end, the judges had no questions but the Boca High [students] and the audience were trying to trap her – ‘what about this, what about that?’ She never failed. She never faltered in the least bit. She carried it through, and I was so amazingly proud of her,” Barkes said.

As for the future, Herbst is working to open-source her probe through a creative commons license that allows her technology to be available to people all over the world, from those in developing countries to those in the classroom, she said. Other than that, however, her horizons are open.

She said, “I have my whole future ahead of me … You can take your ideas and look at the bigger picture and know that, one day, eventually stuff will come together.”