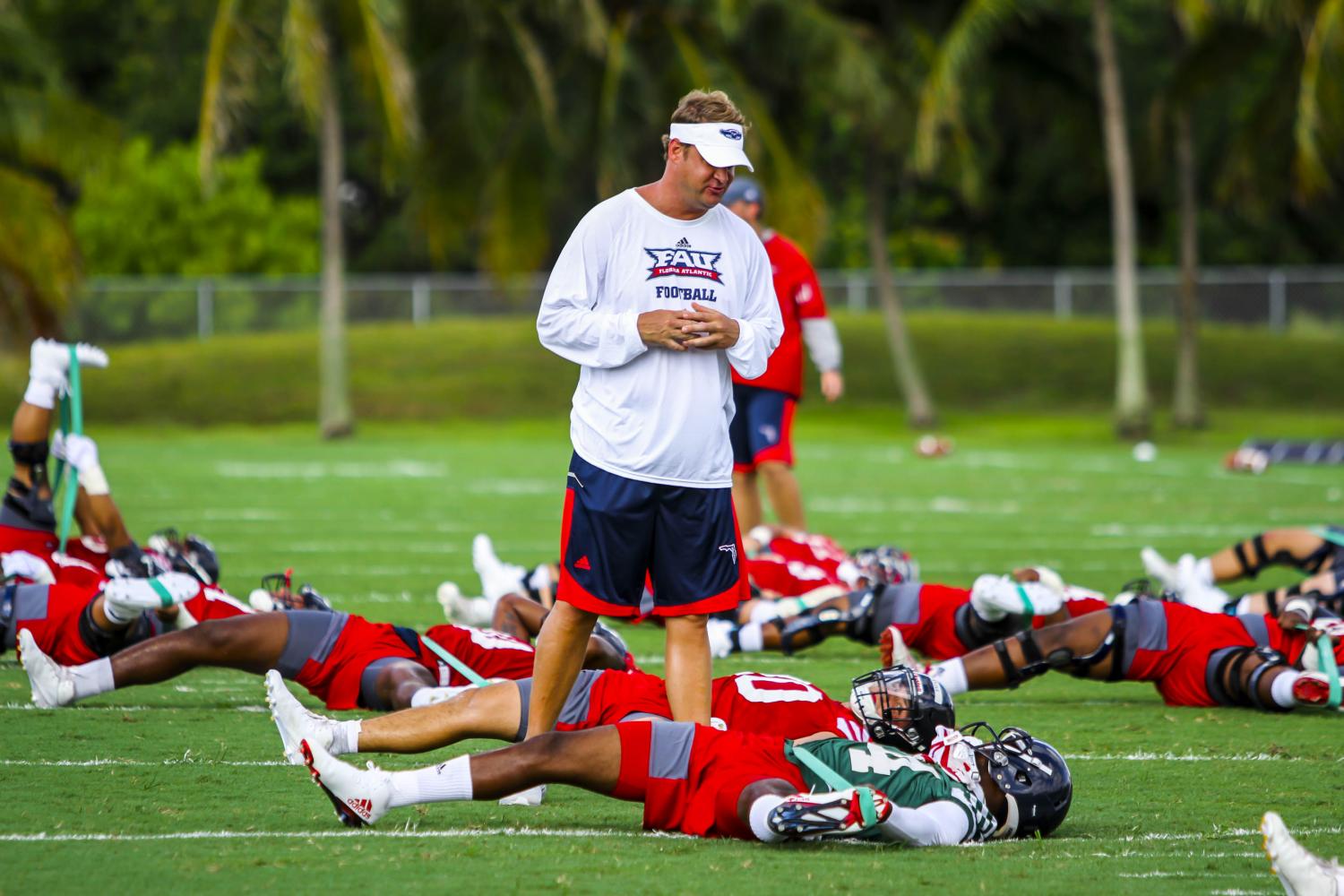 Head coach Lane Kiffin and the rest of the coaching staff attracts what could be the cornerstone of the class of 2020. Photo by Alexander Rodriguez

Editor’s note: All rankings and ratings according to 247sports.com.

The Lane Kiffin era at FAU started off strong during the coach’s first season. Along with earning the No. 1 ranked recruiting class, the Owls finished as undefeated conference champions and won their first bowl game in almost a decade.

With that success in mind, let’s see how Kiffin’s second recruiting class stacks up to his first.
First Class: 2017

Following former head coach Charlie Partridge’s departure, it was announced Kiffin would be taking his place in December 2016.

He then had less than two months to not only assemble his staff, but also recruit players for his team. Ultimately, both his and his coaching staff’s work paid off, as the Owls earned the top ranked class in Conference USA for the first time in program history.

Overall, 17 of the 24 signees were ranked at least three stars.

Kiffin soon made headlines when he landed a couple of well-known players from East Mississippi Community College, the focus of Netflix documentary series “Last Chance U.” The school lets players taken off college football rosters play at the junior college level.

The players consisted of former Florida State quarterback De’Andre Johnson and former Louisville defensive end Tim Bonner. Bonner recorded eight tackles in his limited playing time, while Johnson was sidelined for the majority of the season due to blood clots.

Another former EMCC Lion decided to come to FAU for his final collegiate season, transferring from Auburn.

John Franklin III converted to play wide receiver where, in his first season at the position, he caught seven passes for 95 yards. He did most of his damage in the conference championship game, where he had one catch for a season-high 22 yards and his lone receiving touchdown.

Franklin did run for over 230 yards and two touchdowns while playing quarterback out of the wildcat formation.

Kiffin also recruited former three-star wide receiver Willie Wright. In his first season as an Owl, the freshman from Raines High School in Jacksonville, Florida led the team in receptions (56), receiving yards (657), and receiving TDs (six).
Second Class: 2018
The Owls had the chance to find out who some of their new players were a little earlier than usual this recruiting season due to the first ever early National Signing Period that took place Dec. 20-22.

Of the 16 FAU commits overall, five signed their letters of intent during this time, including 3-star Charles Cameron from Copiah-Lincoln Community College in Wesson, Mississippi.

In his nine games at the junior college level, the 6-foot-2, 290-pound defensive tackle tallied 48 tackles, including four sacks. He chose FAU over other offers from Louisville, Texas Tech, Colorado, and Kansas, among others.

Cameron is currently attending classes on the Boca Raton campus and plans on taking part in spring practice. He will have the opportunity to fight for a starting job in the spring and join a defensive line that recorded a C-USA-leading 38 sacks last season.

While the Owls did drop from first to fourth overall in class rankings, 13 of the 16 players that signed are rated at three stars, giving the Owls the highest rating per recruit in Conference USA.

Kiffin expanded his recruiting overall by signing half of his class with students who played high school ball outside of the Sunshine State.

One of these players, Nero Nelson, graduated from Simmons High School in Hollandale, Mississippi before playing two years at Copiah-Lincoln Community College. During his time there, the 6-foot, 180-pound wide receiver was rated the No. 3  junior college wide receiver and No. 34 overall prospect.

Despite not signing as many players as his first class, Kiffin was able to attract players to fill holes and supplement the pieces he already had.