Zach Schneider earned his fourth save of the year 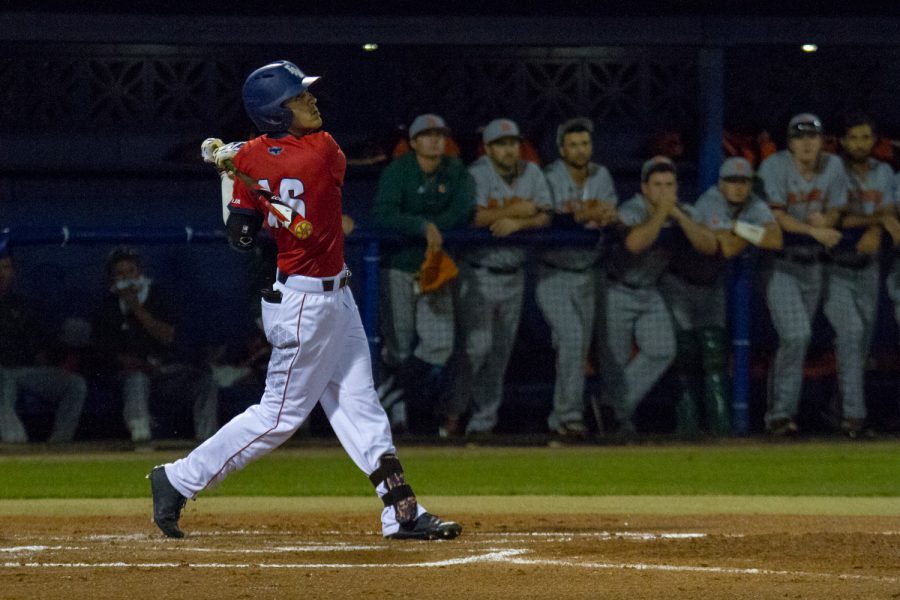 Sophomore center fielder Eric Rivera looks out to the field after making contact during the bottom of the first inning versus the Hurricanes on March 1, 2017. Ryan Lynch | Business Manager

The Owls (7-1) have won four straight games and seven of their first eight, with the lone loss being to the reigning national champion and no. 1 ranked Florida Gators.

The Hurricanes (3-5) lose their fifth of the last six games after starting the year off 2-0.

The Hurricanes lead the all-time series against the Owls 62-15, but seven of those wins have come since 2009.

“It’s a win,” said FAU head baseball coach John McCormac. “It was against Miami, but it counts as one win. It is one of 55 games that we play this year.”

The Owls got on the board early due to four straight hits to start the game.

It all started with a leadoff double by junior shortstop Tyler Frank to start the bottom half of the first inning.

He was then followed up by junior infielder Joe Montes’ single to shortstop that advanced Frank to third base with no outs.

Redshirt senior right fielder David Miranda scored Frank with a blooper single to shallow right field, giving the Owls the 1-0 lead with runners on first and second with no outs.

Sophomore catcher Pedro Pages had the fourth straight hit for the Owls, a single to shortstop. Shortstop Freddy Zamora made a throwing error trying to get the force out at first, which allowed Montes to score to give FAU the early 2-0 lead.

Miranda and Pages advanced to second and third with no outs.

The Owls added to that lead with one out after sophomore outfielder Cody Wilson hit a grounder to short. Zamora got the force out at first, allowing Pages to add a run to the lead, 3-0.

Junior left fielder Diamond Johnson got the Owls fifth hit of the inning, sending sophomore second baseman Eric Rivera home to score the fourth run of the inning for FAU.

After redshirt freshman Andru Summerall was walked to load the bases for leadoff man Frank, who was back up to bat. After teasing the crowd with a shot that just went wide left of the foul pole Frank ended the inning with a pop out to center.

“We needed every one of them, so that was important,” said McCormack on the four run first inning.

With one out in the top of the second, catcher Michael Amditis got the Hurricanes first hit of the game, a single to left.

After another single to left by third baseman Raymond Gil, Miami loaded the bases with two outs after second baseman Willy Escala was hit by a pitch.

Sophomore pitcher Nick Prather eventually walked home a run to give the Hurricanes their first run of the game. With the bases still loaded, Prather got centerfielder Tony Jenkins to strike out swinging to end the inning.

The Hurricanes quickly got back to it in the top of the third with a leadoff single by left fielder Michael Burns.

Designated hitter Michael Perez then launched a shot to deep right field over the scoreboard for his second homer of the year to pull the Hurricanes within one run, 4-3.

The Owls extended their lead later on in the bottom of the fourth. Frank got things started with another leadoff double.

He then advanced to third after a wild pitch and eventually scored his second run of the game after a Montes sac fly to right field, allowing Frank to tag up and score giving the Owls the 5-3 lead.

After going scoreless for three innings, the Hurricanes got back on the board to cut into the Owls lead in the top of the seventh.

Third baseman Romy Gonzalez started off the inning with a single to center.

He then stole second and third base back-to-back. He eventually scored for the Hurricanes after a sac fly to right field from Amditis to make it 5-4.

The Hurricanes threatened to tie the game up later on in the top of the eighth. Senior relief pitcher Drew Peden allowed two straight hits to start the inning to put runners at the corners with no outs.

He buckled down after that retiring three straight batters, two by strikeouts swinging, to retain the Owls 5-4 lead.

They threatened again in the ninth with two on and one out, but junior closer Zach Schneider got Cloonan and Zamora to line out to second and first base to end the game.

In his second start of the year for the Owls, Prather pitched four innings of four hit ball. He allowed three runs while striking out four.

Peden got the win for the Owls, allowing two hits in 1.1 innings of work. He also struck out two of the six batters he faced.

Schneider came on in the ninth to earn his fourth save of the year.

“It is always fun,” said Frank on the atmosphere for the game, with an announced attendance of 1,844. “It’s what you dream of playing in front of crowds like this in front of your university.”

Montes was 1-for-3 with a run scored and one RBI.

The Hurricanes were led by Perez, who went 1-for-5, scoring one run and two RBIs.

The Owls travel to Oregon to take on the Ducks next in a four-game series starting Friday, March 2 at 9:00 p.m.