Cedeño’s 30 points helped lead the Owls to the win 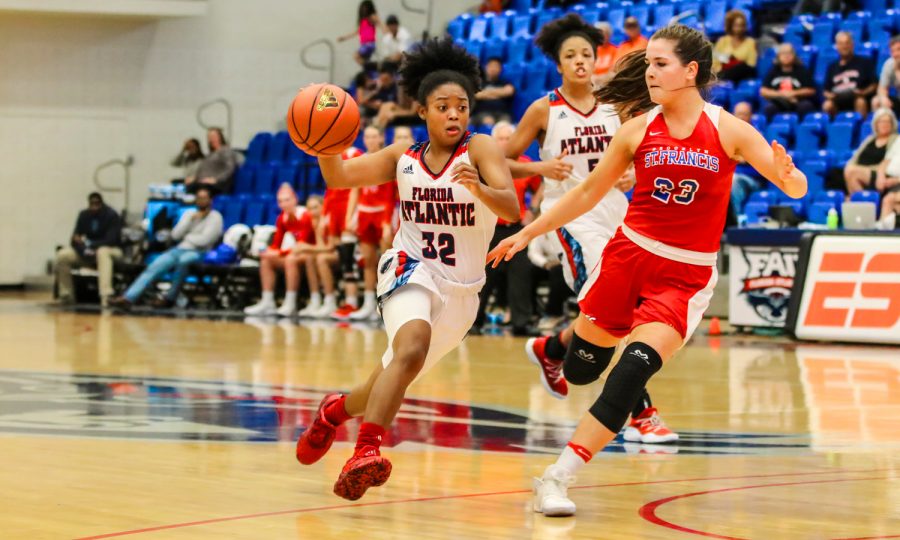 Senior forward Sasha Cedeño’s career-high 30 points pushed FAU women’s basketball to lead for all but the first 18 seconds of the game in a 86-72 win against the Louisiana Tech Lady Techsters.

Cedeño scored 10 of the Owls’ (9-7, 3-2 C-USA) first 12 points Saturday, and finished the first half with 25 points, four made three-point shots and six rebounds while shooting 57 percent from three and 60 percent overall.

FAU led by as much as 21 in the second quarter with Cedeño scoring at will; knocking down contested jump shots, zipping past defenders to finish layups in heavy traffic, and creating contact to draw five free throw attempts.

Free throw shooting was a major difference between the two teams in Saturday’s game. Louisiana Tech (12-7, 3-3 C-USA) converted only 42 percent of their 26 free throw attempts compared to FAU’s 70 percent on 33 attempts.

FAU’s win marked the team’s first ever victory against LA Tech. FAU was previously 0-6 against the Lady Techsters, including last season’s 76-52 home loss.

FAU only dressed seven players for the game which led to extended playing time for redshirt junior Danneal Ford, along with seniors Malia Kency and Sasha Cedeño, who all played at least 35 minutes in the contest.

LA Tech started the second half strong, beginning the third quarter on a 10-1 scoring run by creating turnovers and sprinting past the Owls in transition before FAU could set up its zone defense.

After Louisiana Tech cut FAU’s lead to 54-49 with 4:00 remaining in the third quarter, the Owls answered with a jumper from Kency and four free throws from Cedeño to stretch the lead to 60-50.

FAU came into Saturday’s contest leading C-USA in rebounds per game (44.6) and continued their aggressive work on the glass by consistently boxing out and fighting for position in the paint to out rebound the Lady Techsters by 15, 50-35.

In addition to her offensive performance, Cedeño grabbed 11 rebounds en route to her fifth double-double of the season.

FAU’s lack of a rotation led to LA Tech outscoring FAU 42-7 in bench points, freshman guard Raizel Guinto led the Lady Techsters in that department with 16 points on 5-of-11 shooting.

Cedeño received a roaring cheer from Owls fans on her way to the bench after checking out of the game with 2:04 remaining in the game and FAU leading 81-65. However, her triumphant send-off was premature.

After breaking its two-game losing streak with a home win against LA Tech, FAU will begin a two-week road trip playing a total of three games. FAU’s next game is Thursday Jan. 25 at 8:00 p.m., against UTSA.

Wajih AlBaroudi is a contributing writer for the University Press. For information regarding this or other stories, email [email protected]