Adventures of vagabonding on campus

From getting caught by police to suffering through multiple rainstorms, one student shares some of his adventures living, without a dorm, on the Boca campus. 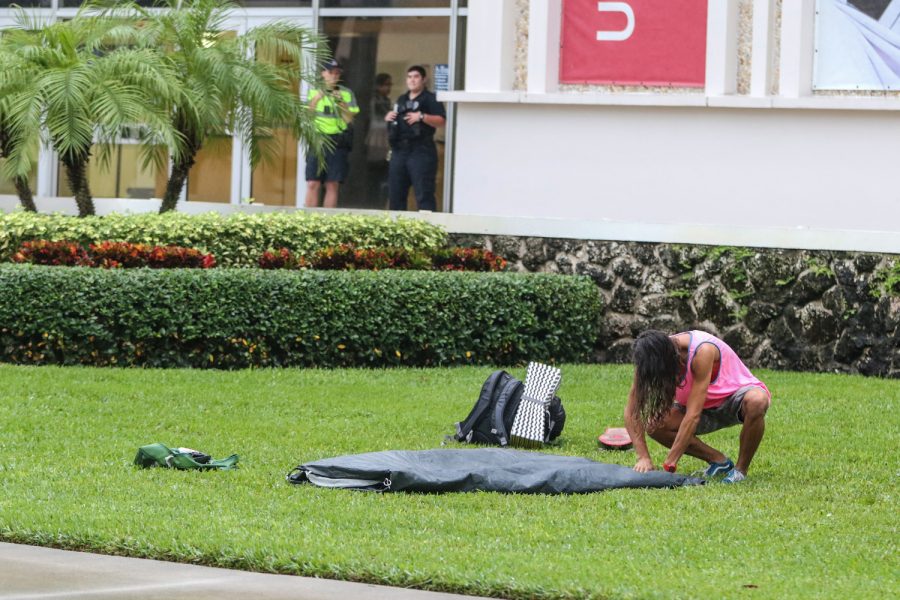 The FAU police officers who woke me up stand under an overhang as I pack up my tent in the rain.

Sleeping outside on the Boca campus may seem dangerous, but it’s really not. It’s mostly modern inconvenience magnified by the strong desire to avoid having to sleep in a bright, muggy stairwell again.

Despite this, it does lead to odd and entertaining adventures that I ended up learning a couple things from.
The Trouble with Tenting

It rained the first time I slept outside, a thundering night in October. I didn’t have the best timing.

Earlier that day I went to the Rec Center to rent a two-person tent from its Outdoor Adventures office. I left with a three-person tent the size of a six-person that looked like it was bought at Walmart.

That night, I set up shop near the back of campus. There was a light sprinkle of rain with the rumblings of thunder in the distance getting closer. The ground had started to become muddy and of course, the tent’s main pole didn’t fit in the appropriate hole.

As the rain turned into a monsoon and the thunder moved right over my head, I found out three things that night:

The tent wasn’t waterproof. I spent 30 minutes trying to dam the water from leaking to the middle of my tent before giving up and packing up.
I talk very enthusiastically, and concerningly to myself when I’m packing up a subpar tent in a torrential downpour at midnight with class in the morning.
People are surprisingly considerate when they see a mud-soaked person drop an equally muddy and wet tent, with one student holding a door open, asking with intense concern, “Are you OK?”

Seeing as the tent wasn’t going to be much help, I decided to try again and see if the rain would hold out for the night and I could just sleep in my hammock.

I set my hammock up between tree branches near Parliament around 11 p.m., tied my backpack up in the tree next to me so I could get to it easily, and drifted off to sleep. I wondered how waterproof my hammock was and at 1 a.m. I found out.

As I found myself once again stuck in the rain and having a bit of practice at this point, I jumped out and starting shoving things back into my backpack.

Afterward, I ran to the Arts and Letters building — where I had earlier left a door open in case I had to sneak inside to sleep under cover. There’s a small backroom I was going to sleep in but after finding many, MANY, dead bugs I went to plan B, a stairwell.

While quiet and unoccupied, this stairwell was also bright, uncomfortably warm, and made of concrete. Without revealing which one to keep it safe as this was the second time I stayed there, I slept with a shirt wrapped around my face blocking the light and luckily had my sleeping pad.

I woke up around 8 a.m. and went to the Rec Center to shower before class. The rain had foiled me again.

After three nights of poor sleep, I was able to borrow a waterproof, four-person tent from a friend. I decided to set it up at the same trees near Parliament.

My only worry was that the FAU police would see me and come over. They didn’t.

Instead, as I drifted off to sleep, I heard a door slam.

Peeking through a flap in my tent, I saw a white car drop off two people with flashlights. While whispering, they walked to a couple of trees over from my tent.

I thought I was witnessing a drug deal, in which case I would have just tried to go back to sleep again, but no, they decided to come over and start waving flashlights into my tent. While laughing, they yelled, “Tent boy!” and then ran away.

After waiting a couple of minutes to make sure they didn’t come back, I went back to sleep. In the morning, I still had “tent boy” echoing out of confusion in my head.

Now, throughout these adventures I was worried about getting caught mostly because I didn’t know what the school or police’s policies were about students sleeping on campus — and I wanted a good night’s sleep. After researching state law, city and county ordinances, and FAU regulations, I couldn’t find anything saying I couldn’t camp on campus grounds, so I put it to the test.

The evening after “tent boy,” I pitched my tent directly in front of the administration building (see previous page) to see what would happen. I brought a photographer from the University Press along as well, Josh, who staked out nearby. I went to sleep around midnight, despite the odd glances from the custodians taking trash out of the building.

Around 7:30 a.m. I heard a voice asking if there was someone there. When they asked me for my name and if I was a student, I realized I’d finally been caught.

I quickly texted Josh as two police officers started talking to me — asking what I was doing in a tent, to which I replied, “Camping.” (I was killing time until the police station verified I was a student.)

I then asked if camping is allowed on campus.

One of the officers said, “That’s a good question, I don’t think it is. But you know you aren’t doing anything necessarily like breaking any laws or anything, I think it’s more or like a campus regulation plus you’re right outside administration.”

After the police station confirmed I was a student, the officers said I would just need to pack up and I could leave no problem. After it started raining yet again, I packed up my tent and left as the cops stood under an overhang.

So without any proof of a policy stating I wasn’t allowed to camp on campus, I was kicked off the administration lawn.

Wanting an answer as to whether or not it was legal, I later called the police station and spoke with Captain Larry Ervin. His response? “No.”

When I asked what FAU regulation stated this, he said he had to call me back.

Six days later I call again, with Ervin saying, “Give me some time to look that up. Call me tomorrow afternoon and I will have an answer for you.”

Three days later I call again. Ervin said, “I’ve been trying to do some research, most of the problems with the tents is safety issues. Everytime you set something up on campus it’s like in a state park, has to do with size of the structure. It’s part of state laws.”

I couldn’t find anything saying this. That being said, Captain Ervin was incredibly professional and polite while looking for this information.

But is camping allowed on campus? Who knows, the police don’t seem to.

Andrew Fraieli is a contributing writer for the University Press. For information regarding this or other stories, email him at [email protected]