Attendees participated in a candlelight vigil and presented expressions of art. 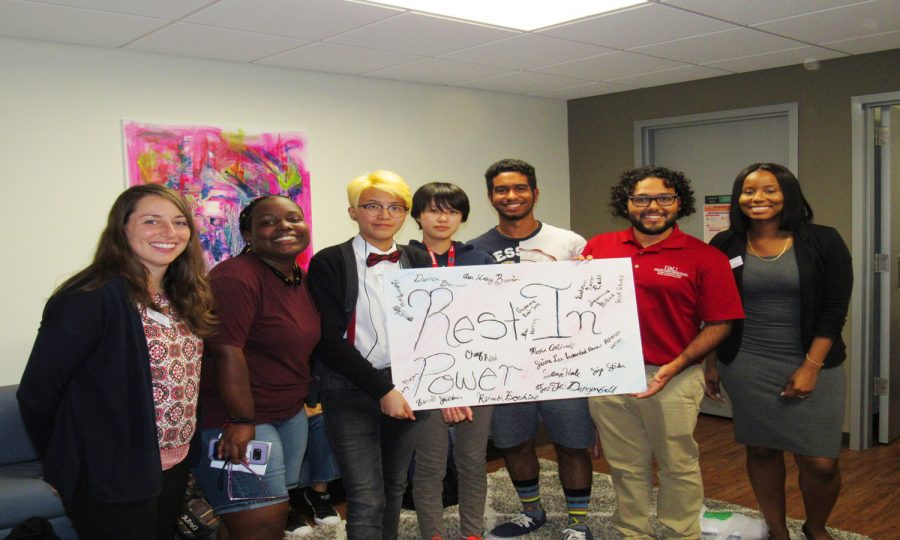 Transgender individuals in today’s society can face discrimination, harassment, and even violence for attempting to live their lives the way they see fit.

FAU recognizes the potentially dangerous situation transgender individuals face in a society that has not fully accepted them. The Women’s Gender and Equity Resource Center, in conjunction with the Office of Diversity and Multicultural Affairs held a commemoration on Nov. 20, the International Transgender Day of Remembrance.

“Trans Day of Remembrance is for paying homage and remembering those who pass every year because of trans violence,” said Geanny Joseph Ruiz, Program Coordinator of the FAU Pride Resource Center. “The purpose of this event is really to humanize those individuals because they aren’t just names.”

Twenty-three transgender individuals were killed in both 2016 and 2017, according to the Gay & Lesbian Alliance Against Defamation (GLAAD). That number is an increase from 2015, when 21 individuals lost their lives for being transgender.

“These are people who had lives and who actually existed and had a purpose,” Ruiz said. “And they were killed just because they were trying to be who they were.”

Organizations such as GLAAD, the Human Rights Campaign, and the National Coalition of Anti-Violence Programs are among some of the advocacy groups that keep track of the number of transgender individuals killed every year.

Some of these organizations vary in the exact number of deaths they track, but overall the rising trend is the same.

The commemoration was held in the newly opened Women’s Gender and Equity Center located on the second floor of the Breezeway. About 20 students and faculty were in attendance.

“This space is for [students] use,” said Jill Rubin, the newly appointed coordinator of the Women’s Gender and Equity Center. “Hang out and use it as you see fit, we are gonna have educational programs going on throughout the year.”

Rubin revealed that the new center has resources such as a lactation room — a private area where breastfeeding women can use a breast pump or nurse their child.

Attendees at the commemoration then learned about the 23 transgender individuals who had lost their lives that year. A presentation showed the victims’ names, pictures, and a brief description of who they were. Following this, 23 electronic candles were lit to commemorate their lives and a moment of silence ensued.

Spoken word and artwork relating to transgender issues were presented by students to express their personal insights and feelings. Freshman Mark Pham shared some of his poetry titled “Let Me Be Me” and “My Little Price” that he had written during tough times in his life as a transgender man.

“I am a very big advocate of trans rights and stuff like that, I’m passionate about it,” Pham said. “My club advisor from [Gay-Straight Alliance] during my high school years, she was the one that really advocated for a lot of the facilities that made it much more comfortable for me as an openly trans person.”

Participants were also each given a piece of paper with a quote written on them from transgender advocates. Each person read their quote and reflected on what it meant to them.

The quote that received the highest amount of praise was one attributed to Laverne Cox, an openly transgender woman that is one of the stars of the Netflix series Orange is the New Black:

Some students reflected how not only those that are cisgender or cissexual may be oppressors, but also those within the LGBTQ itself.

“I think the oppression quote was very powerful,” said Laurel Ardner, vice-president of Lambda United. “There is a lot of hate inside the LGBT community…a lot of gays do not like lesbians, a lot of bisexuals are seen as ‘just a faze.’”

After the quotes were read and reflected upon, the event took a shift towards the  discussion of what everyone can do to stop the perpetuity of violence and ignorance towards the LGBT community.

Just like the Cox quote, the speakers of the event touched upon how we can all be oppressors, but also have the power to be liberators by promoting the inclusion and incorporation of all people.

One such topic that arose, in reference to FAU, was that of gender-neutral bathrooms and housing.

As of now, FAU does not have gender-neutral housing and some students there cited it as a reason they choose to not live on-campus. One student noted how he had to out himself as a transgender person during orientation and had to spend the night in a room by themselves, rather than with a roommate as is customary.

FAU has incorporated gender-neutral bathrooms on-campus, but students at the the event noted that they usually were located in out of the way places “no one goes to,” and how they seemed to not be regularly cleaned.

An open house for the Women’s Gender and Equity Resource Center is planned for next Wednesday, Nov. 29. Students can attend the event to learn what the center is about and hear the plans they have for the future.

Victor Lopez is a contributing writer for the University Press. For information regarding this or other stories, email [email protected]