The school receives millions of dollars in research funding each year from the National Institutes of Health to make groundbreaking scientific discoveries. 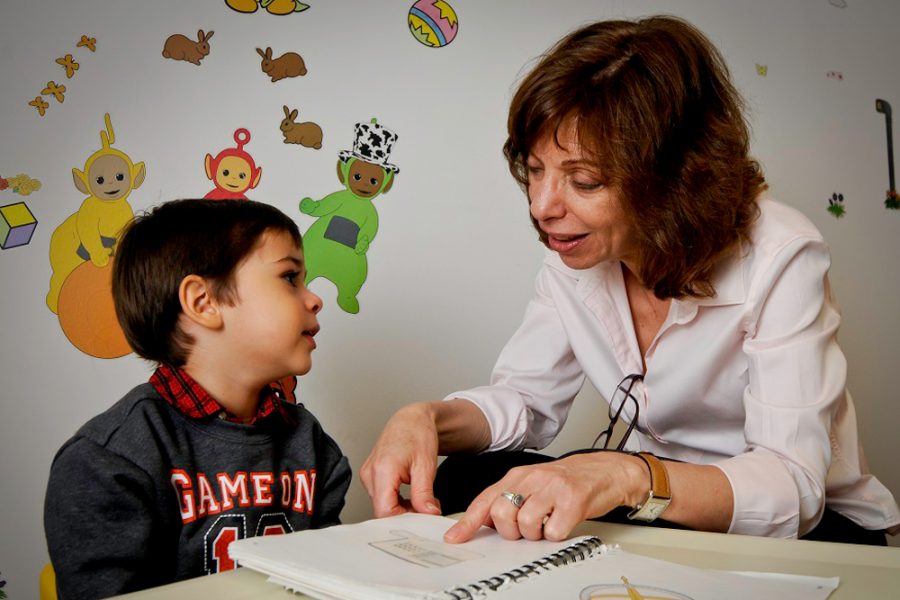 Erika Hoff sits with a member of her linguistics study. Photo courtesy of FAU News Desk

Since Florida has received a record-breaking amount of federal funding, FAU biomedical researchers are putting the university’s Division of Research on the map.

Seventeen FAU biomedical projects have been awarded a collective $5.4 million to research how to reduce illness, understand the nuances of the human brain, and improve society’s overall health.

Florida received a record-setting haul this year — $644 million — up from last year’s record of $528 million, according to the Palm Beach Post.

The majority of Florida’s NIH grants were picked up by state schools; FAU came in 12th among Florida’s public institutions.

Most projects are a team effort, comprised of professors, Ph.D. students and undergraduate students. The following is a look into five of the most funded scientific developments happening at FAU right now.

Randy Blakely, Ph.D., is an internationally renowned neuroscientist who joined FAU’s Charles E. Schmidt College of Medicine in 2016 from Vanderbilt University. He currently serves as executive director of the FAU Brain Institute, where researchers look to improve the lives of those with bipolar disorder, schizophrenia, drug addiction, Alzheimer’s disease, and dementia, among others. Blakely is also a professor of biomedical science at the Jupiter campus and is responsible for a dozen patents related to his gene discoveries.

Blakely has a track record of landing government funding for his work. This fiscal year, he was awarded $857,866 for two projects: “Regulation of Serotonin Transporters” and “Knock-In Mouse Model of Dopamine Dysfunction Underlying Traits of ADHD.”

Serotonin is a mood-regulating chemical that carries signals between nerves and can activate muscle constrictions. It’s also a compound that directly contributes to our feelings of well-being and happiness.

Blakely and his team of scientists use lab mice to study a specific serotonin mutation, which essentially stops the chemical’s production. Through their research, scientists hope to understand how to better treat conditions like depression and addiction.

The neuroscientist was also granted an extra $2.5 million to continue his study of serotonin and its relationship with disorders like anxiety, depression, obsessive compulsive disorder, and autism. Blakely’s ultimate goal is to change the way we treat these disorders and diminish the harsh side-effects that come with certain antidepressant drugs like Prozac and Zoloft.

Established in 2016 on the Jupiter campus, the institute was also named a Nikon Center of Excellence in December the same year. The Nikon Center is a partnership with select research centers that invest in providing young researchers with access to high-end imaging technology. The institute is now one of only seven centers in the U.S., and 17 internationally, to have received the distinction.

Erika Hoff, Ph.D., is an FAU psychology professor in the College of Science.

Hoff is also the director of the Language Development Lab. Its researchers have been studying the linguistic development of children who only speak one language, English, and the development of English and Spanish in bilingual children for seven years.

In 2013, Hoff was appointed as a member of the Language and Communication Study Section of the National Institutes of Health. Last year, Hoff was granted $2.9 million for her work in bilingual language studies.

Hoff’s research focuses on how language development is different in children who are acquiring two languages simultaneously. The 7-year-old study began when the participants were 2 1/2 years old and will continue until they are 10.

Hoff and her team are following their development to study how their early language skills are related to their later language and literacy skills. In February 2017, the study was published in the journal, “Developmental Science” and reported that when Spanish-English bilingual children learn two languages from birth, each language progresses independently of the other.

The researchers also found that Spanish vocabulary and grammar skills can be influenced by their English skills, but English is not susceptible to influence from Spanish language rules.

“One of the clear lessons from our research is that it is difficult to maintain Spanish skills in an English speaking world,” Hoff wrote in an email to the Universtiy Press. “This comes as a surprise to many people because we hear Spanish spoken all the time in South Florida. But Spanish is spoken more by older immigrants. For children English encroaches on their development of skills in Spanish.”

National Institutes of Health: The ‘gold standard’ for scientific research

Securing thousands, let alone millions, from the National Institutes of Health is not an easy task. The vetting process for research funding is long and complicated, making it that much more significant that Hoff was chosen to receive over $2.9 million. The institutes reported that more than 80 percent of applications were denied in 2016, which was a higher success rate than the previous year.

Salvatore Lepore, Ph.D., is a chemistry professor in the College of Science. Lepore began his scientific career at FAU in 2000.

He has received numerous awards and grants from the American Chemical Society, the National Science Foundation, and the National Institutes of Health. In addition, he is an associate editor for “Perspectives in Medicinal Chemistry,” an international, peer-reviewed journal for medicinal chemists.

Lepore was first awarded funding in 2014 and continues to work closely with FAU Brain Institute Associate Director Ken Dawson-Scully and his team.

The Dawson-Scully group researches how to protect the brain from damaging neurological conditions by using their internationally known chemical derived from fruit flies. Their efforts, along with Lepore’s, hold promise for a new treatment strategy of damage caused by strokes and certain neurological diseases like Parkinson’s.

These studies are intended to serve as a starting point for the development of new medicines.

“I want to stress that our research is of a fundamental nature, which occurs at the beginning of the drug development process,” Lepore told the UP. “We are discovering new knowledge in Chemistry and Biology that, if all goes well, will pave the way for future medicinal therapy.”

The project is in its final grant cycle, meaning the teams have one last step before they’ve finished creating this naturally derived chemical.

Herbert Weissbach, Ph.D., has been a research professor in the College of Science and director of the Center for Molecular Biology and Biotechnology at the Jupiter campus for 20 years. Before he came to FAU, he worked for the U.S. government and spent 27 years in the biomedical industry.

Weissbach is known for his discovery of chemicals that work to target and kill cancer cells without harming healthy cells. He found that cancer cells, unlike healthy cells, are more sensitive to damage after exposure to anti-inflammatory drugs.

Weissbach and his team of FAU researchers are looking to prevent damage caused by the aging process and age-related diseases. Using flies and worms as test subjects, the team discovered that their lifespan can be stretched by increasing the level of protective chemicals in their DNA.

Though these findings are not for human use, they inspired a search for the treatment of retinal damage in the eye. Some diseases of the retina lead to vision loss that are due to the aging process. Today, Weissbach is working to treat two age-related diseases, macular degeneration and a genetic disease called retinitis pigmentosa using funding from the National Institutes of Health.

FAU’s Research Park on the Boca campus is the only state-affiliated research facility in South Florida and is home to more than a dozen million dollar companies and five support organizations.

Scott Kelso, Ph.D., is a neuroscientist and professor of psychology and biological sciences.

Originally from Northern Ireland, Kelso left Yale University to start the Center for Complex Systems and Brain Sciences at FAU in 1985. His move was supported by “visionaries” at the National Institutes of Health who provided funding not only for his research, but for a national training program in complex systems and brain sciences based at the university.

This past summer, Kelso was admitted to the Royal Irish Academy, Ireland’s leading group of experts in sciences and humanities.

Kelso told the UP that research and teaching are his calling.

“I don’t want to glorify it, but for me the life of a scientist is a combination of work and wonder,” Kelso said. “Like everything else it has its ups and downs, its fits and starts, its ebbs and flows, priorities that come and go, but you just get on with it.”

Kelso and his team are using state-of-the-art brain imaging technology and theories surrounding behavior to understand how humans interact. This new field of social neuroscience relates to disorders like schizophrenia and autism.

The researchers tested the brains of two interacting people to observe the patterns of interaction that evolve to form a “dance.”

It is this dance that Kelso’s lab believes produces ordinary behavior and can be affected by mental conditions and disease.

Katrina Scales is the news editor of the University Press. For information regarding this or other stories, email [email protected]