Coastlines and Swamp Ape Review are working on their first print issue with different goals in mind. 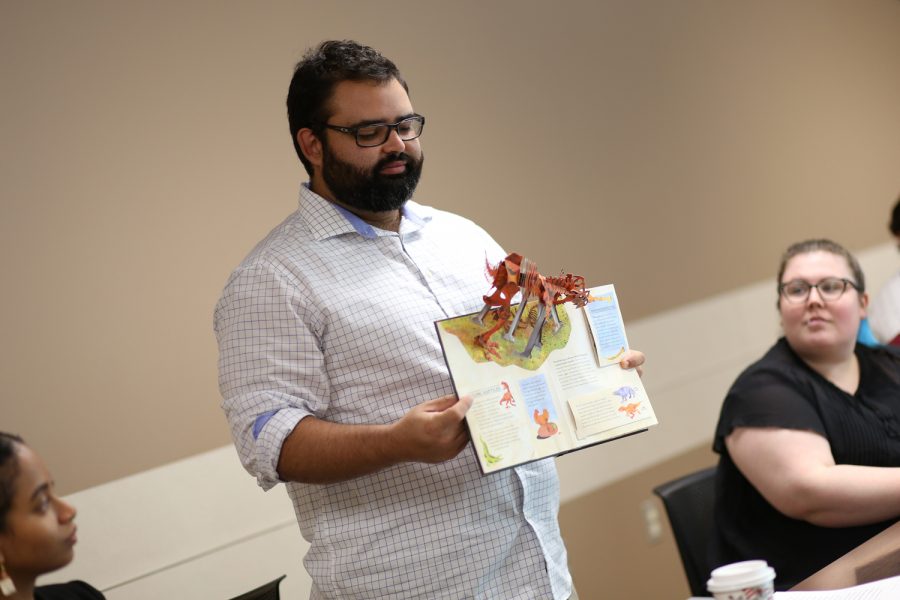 Students sit around a table in Room 301. Half of them are working on a story about taking a trip inside an umbrella. The other half, on an expedition where everyone kills each other. Both stories will be published this year but for two entirely different publications. And they both work out of the same room.

The College of Arts and Letters has two literary magazines, Coastlines and Swamp Ape Review. Founded in 1970, Coastlines publishes, on average, a 90-page paperback book once a year, giving students the opportunity to write and edit poetry, fiction, non-fiction, and submit illustrations.The publication can be taken as a class under the arts and letters college.

Swamp Ape Review is a new literary magazine master’s degree program founded in 2015 that’s created entirely by master’s students. Taking its inspiration from the mythological human-like creature of the same name, the magazine has a theme of alternative poetry, fiction, and nonfiction.

Unlike Coastlines, Swamp Ape Review has been exclusively online and accepts worldwide submissions, some coming from as far as Iceland. But this time around, the students involved are looking to print their first ever paperback.

Swamp ape editors Mary Mattingly and Meryl D’Sa both talk to their group about what’s next for Coastlines. Alexander Rodriguez | Photo Editor

Every Wednesday afternoon, students meet in Room 301 of the Culture and Society Building to start working on this year’s editions of Coastlines and Swamp Ape Review.

After the initial meeting led by both group’s faculty adviser, English professor Kate Schmitt, the groups split off and head to different rooms in the culture building.

Down in Room 125, Coastlines’ editing team talks and reviews entries submitted for its upcoming annual fall showcase being held on Nov. 29 in the Live Oak Pavilion. The showcase will feature writers and artists from past issues.

Graduate assistants Mary Mattingly and Meryl D’S are part of Coastlines and Swamp Ape’s editorial team. They help decide what artwork and writing submissions get accepted to both publications. Once the submissions are in, they, along with members from each literary magazine, discuss and edit the pieces.

“We discuss the submissions and put them on the screen,” Mattingly said. “We all talk about them at first then we have them work on each piece, each genre, and review what works with Coastlines.”

The graduate assistant said that for the most part, Coastlines expects submissions from liberal arts majors.

“It’s cool to see what the FAU community is submitting. Primarily, we would expect the English majors to submit, so the challenge is soliciting other submissions from a different department,” Mattingly said.

The graduate assistants added that they get feedback from student contributors when deciding on a theme for each Coastlines edition.

“It would be difficult to figure out a theme and not have students contribute to that,” D’sa said. “So we see what we get and get a common thread between all of them.”

Meanwhile, Swamp Ape Review gathers in a computer lab in Room 240. Around 15 members work to put together what will come out in January as their first paperback edition. 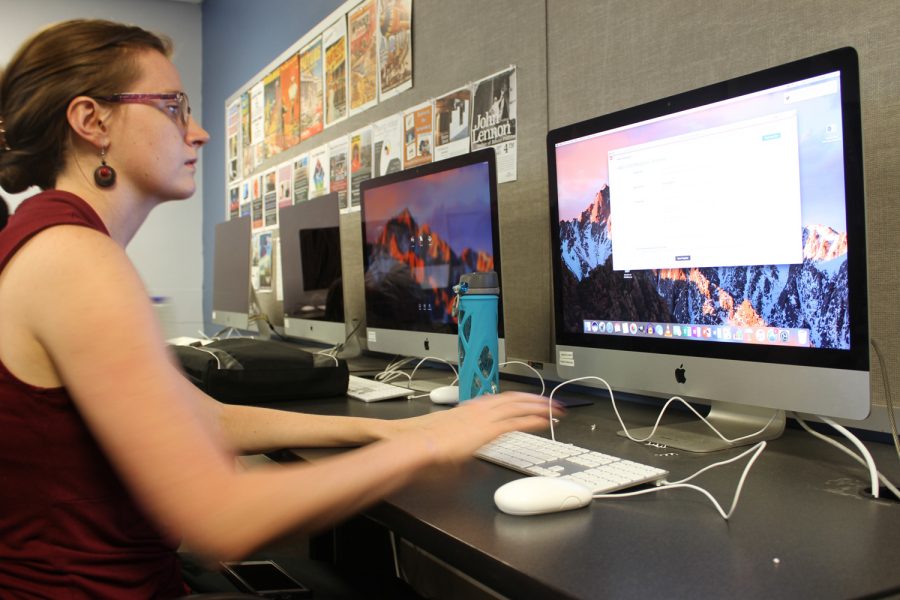 Graduate student Kathleen Martin said Swamp Ape Review looks for submissions that reflect the uniqueness of the swamp ape legend, said to roam around Florida and share a resemblance to Bigfoot.

“Swamp Ape kind of lends us the idea about hybrid pieces and that maybe things aren’t clearly poetry or clearly fiction or clearly visual arts so it blends the boundaries of the genre,” she said.

Martin added that the editing team looks for unconventional pieces.

Back at Coastlines, senior English major Angela Chaperon said that while editing poetry, she looks for originality. The senior said that she has never turned down entries but suggests that some need improvement before they’re considered ready for print.

“There are a few really good ones that have the potential to be amazing they just need a few changes … It’s not really a major deal but they’re really amazing,” Chaperon said.

Chaperon said that she often reviews poetry submissions for about two hours every week, one in the Coastlines class itself and one outside of class. According to the English major, she treats it like schoolwork, giving her time to spend with friends and finish assignments for her other classes.

“You have to make time for it, if you want to do it,” the senior added.

Kate Viola, a member of Coastlines’ nonfiction editorial team, said that she will often debate whether or not pieces belong in the publication.

“I remember there was a poetry piece, like, two or three weeks ago and we spent the entire class talking about poetry and there was this one piece that I loved and I was, like, ‘I’m going to defend this piece,’” she said.

Swamp Ape Review managing editor Natalie Rowland said that she feels lucky to have the opportunity to work at the publication.

“… This is giving us a chance to practice practical skills of running a literary magazine,” she said.

Rowland added, “For me, it’s a lot of management, a lot of one-on-one outreach with artists and that has been really fun, honestly, because we’ve been able to connect with so many people who come to the campus.”

Coastlines: Once per year on paperback
Swamp Ape Review: Twice a year online, with its first print edition coming out in January

The managing editor said that Swamp Ape has interviewed guest writers like Justin Torres, author of the book, “We Are the Animals,” and have him be involved with the FAU literary community.

Rowland said that their content shows people there are passionate writers all over the world, mentioning a submission from a bartender in the Alps in Europe.

“We definitely get very unexpected people,” she said. “It’s kind of cool to think about things as you go about your daily life, there’s a waiter at a restaurant who could be some super talented writer or artist. So it takes you off guard.”

Vazquez, a senior studying English, said that Coastlines’ small budget means they have to focus on advertising rather than putting out more editions.

Coastlines gets the money to print from FAU’s Council of Student Organizations. According to its website, COSO is a Student Government program that helps fund student organizations like the literary magazine.

Swamp Ape Review has mostly been funded through donations from the student body and teachers. But recently, the Florida Council on Arts and Culture awarded it a $10,000 grant to print its first issue.

“[Gulf Coast] was a very well established literary journal with a lot of money and a board of directors,” she said. “Swamp Ape Review was created in 2015 and originally it was called Magazine X.”

Schmitt added, “They were working how to figure out their aesthetic and all of that stuff. It’s still a work in progress.”

With Coastlines, Schmitt said that they replace the staff every three years. In comparison, the adviser said that Swamp Ape Review has to figure out its long term goals.

“One of the things Swamp Ape is going to have to figure out that Coastlines won’t ever have to is what their long term aesthetic goals are going to be,” she said. “Whereas Coastlines, because it’s a class, they can choose what themes the magazine can be.”