President John Kelly was one of the award presenters at the event. 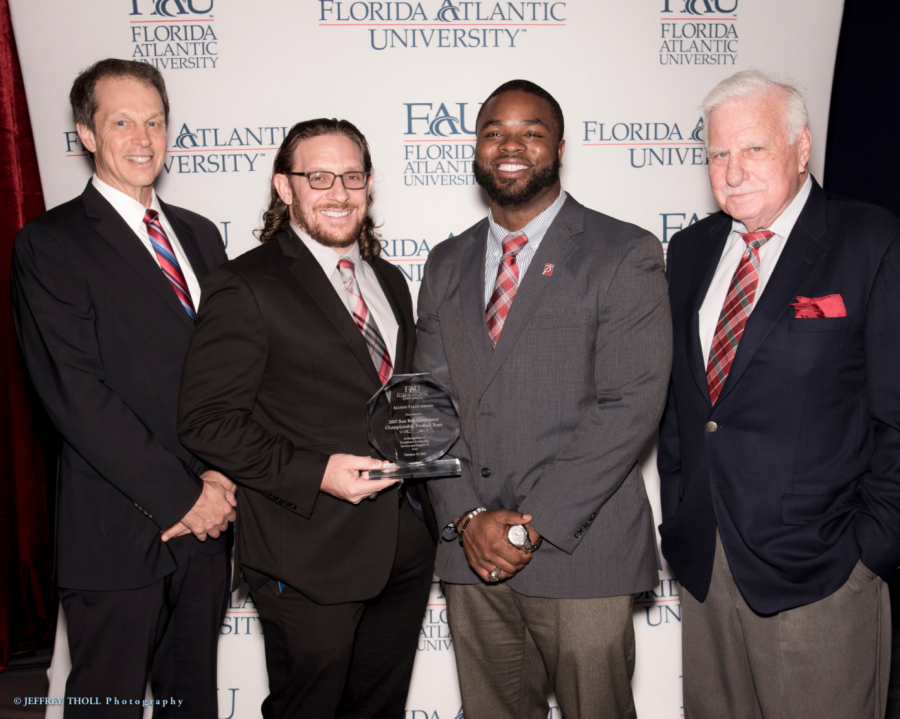 Twenty years after the initial ceremony in 1997, FAU hosted its annual Talon Awards ceremony on Thursday that recognizes outstanding students, faculty, and alumni.

The event, co-sponsored by the FAU Alumni Association and the Student Government Homecoming Committee, took place at 6:30 p.m. in the Recreation and Fitness Center.

The first award winner of the night was Ovini Rodrigo, a third-year student in FAU’s College of Medicine.

Rodrigo served as the vice president of the Pediatric Interest Group in her first two years of medical school and currently serves as a student leader for the Health Care Careers Outreach Center.

“It’s been a wonderful career being an owl so far,” Rodrigo says. “I hope I can keep serving the FAU and Boca community.”

Vice Provost Michele Hawkins was welcomed to the stage to present the Faculty Talon Award to Dr. Heather Thompson from the College of Design and Social Inquiry.

Thompson is a licensed social worker and serves as the director of the university’s Child Welfare Institute. She is also an assistant professor for FAU’s Phyllis and Harvey Sandler School of Social Work.

“Dr. Thompson has had a direct impact on countless children’s lives by elevating the overall competence of therapists who will serve them,” said Hawkins, before bringing Thompson up on stage to accept her award.

In her acceptance speech, Thompson expressed what her job at the university means to her.

“It truly is an honor when it comes to working with our students, that’s what really brings our experience as faculty members alive,” said Thompson.

The final award, the Alumni Talon Award, was presented by President John Kelly.

This award differed from the previous two. It was not dedicated to one person, but to the entire 2007 FAU football team, who won the university’s first-ever bowl game ten years ago.

Prior to giving out the award in his presentation, President Kelly reminisced about the bowl-winning team.

“In 2007, when I was 41 years old,” Kelly said to laughter, “the FAU football team kicked off it’s seventh season and its third as a member of the Sun Belt Conference.”

Kelly went on to mention the achievements made by the team, which included winning the Sun Belt Conference title and the first victory over a Big 10 School. Coach Howard Schnellenberger was named Sun Belt Coach of the Year and Quarterback Rusty Smith was Player of the Year for the Sun Belt conference.

Former defensive back Kris Bartels, linebacker Cergile Sincere, and Coach Howard Schnellenberger all took the stage to accept the award on behalf of the entire 2007 FAU football team.

They thanked FAU and the faculty for laying the foundation and giving them the platform to bring home the title.

Sincere also went on to comment about the new group of players under the coaching of Lane Kiffin.

“I think we have the opportunity now with the new regime that we have,” Sincere said.

The event came to an end with closing words spoken by Valdivieso before everyone moved to the banquet.

Austin Van Luvender is a contributing writer with the University Press. For information regarding this or other stories, email [email protected] or tweet him @AustinVanl.