Seven fraternities and sororities competed as part of the stroll off. 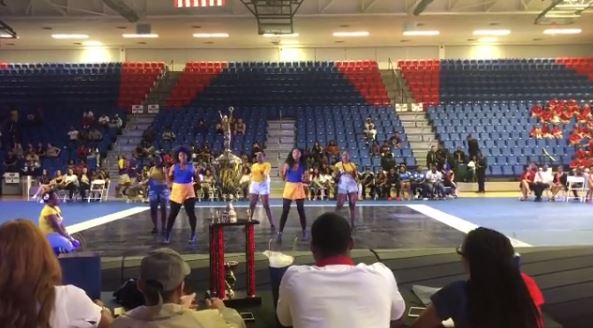 Students cheered on the FAU basketball teams and watched as sororities and fraternities took part in a step competition to celebrate Homecoming week Thursday night.

In the past, “Red Hot Madness,” a basketball pep rally, and the “Stroll Off,” a step competition, have been held as separate events. This year, FAU combined the two into a larger event hosted by the men and women’s basketball teams and the National Pan-Hellenic Council, made up of nine sororities and fraternities.

LaVar Jamison, assistant director from the office of Fraternity and Sorority Life, kicked off the event by welcoming the crowd to FAU Arena and encouraging students to get involved in Greek life events.

Eight judges of the step competition were then introduced as FAU alumni.

Following this, the competition featured seven fraternities and sororities aiming to energize the crowd using words, steps, and dance as part of a choreographed routine.

The Delta Sigma Theta sorority dressed in black T-shirts with black and red tutus and flaunted their afros. Fraternity Phi Beta Sigma finessed the crowd with their suave moves and synchronized choreography.

Games and contests took place in between each stroll off routine, with 103.5’s DJ Stichiz playing music throughout. There were also opportunities for students to come out on the court and win $100 if they made three shots in a row.

The FAU Pulse Dance Troupe and the FAU Cheer and Dance Team performed to several songs including Kendrick Lamar’s “Humble” to engage the crowd. The 2017 Homecoming Court was then introduced, including junior Calonda Harvey, senior Jessica Millwood, and seniors Willie Emerson and Al Campbell.

Senior Shernette Hall shared her experience after her sorority, Delta Sigma Theta, was congratulated for the step competition win.

“Honestly, this was something new to me … I was beyond happy about the judges results,” she said. “Everybody did a good job, everybody came out and showed their best move and I’m proud of them. I think it will be a great turn out next year. We are nothing without our supporters.”

Devin Perry is a contributing writer with the University Press. For information regarding this or other stories, email [email protected].