David Stovall spoke on the Boca campus as part of an event put on by the College of Education. 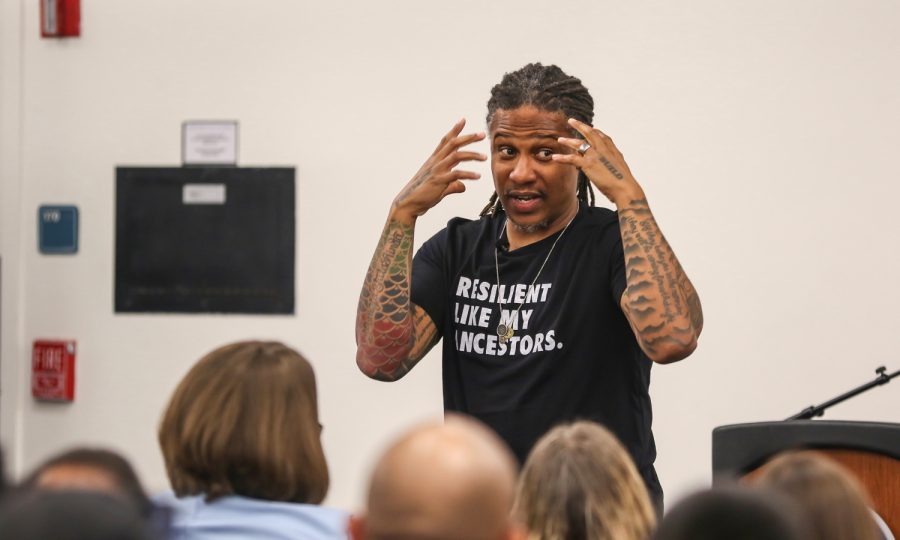 Dozens of students and faculty gathered in the Live Oak Pavilion Thursday evening to listen to guest speaker David Stovall discuss his efforts to push for social justice reform in the public school system.

Invited by the FAU College of Education, Stovall is a professor of educational policy studies and African-American studies at the University of Illinois at Chicago. He titled his lecture, “Struggle in Perpetuity: Justice, Community Engagement and the Right to Education.”

On the outskirts of the pavillion, Stovall pointed out the “bare roots of the [nearby] Balete [Banyan] tree, which symbolizes the roots from the first African-American bodies buried in this settlement.”

He stressed his belief of how imperative it is for Americans to recognize the fact that “the U.S. was founded on genocide and white supremacy, before students and educators can engage in a strategy to destroy this regime rather than continuing to be manipulated by it.”

Stovall described the “panic moment,” a concept where a feeling of fear prevents people from naming what’s causing them harm.

Studies from 2001-14, the professor said, show that racial and social isolation has increased from 9-16 percent. As Floridians, he added that society must acknowledge the work to be done to give all students an equal and “enriching education.”

He urged communities in Broward, Dade, and West Palm Beach to spend less time focusing on the theory of racial inequality and more on concrete changes to educational policies.

“Education changes people and it is people who can then change the world,” Stovall said.

He went on to explain his belief that society has unjustly labeled African-Americans as criminals and not human beings. Stovall claimed that educational segregation is still prevalent in many poorer school districts like in Chicago, a city struggling to receive funding from public school head superintendents who have now been replaced by corporate CEOs.

There are now only 2,500-3,000 African-American teachers in the Chicago community, Stovall said, which is almost less than before the 1954 Brown vs. Board of Education decision that ruled that segregated schools are unconstitutional.

In Chicago, there are five selective enrollment schools in the area and 400 members on the selection committee in the school district. Students who attempt to enroll in these selective schools must take a test in order to take another placement test before getting accepted.

The African-American studies professor said that elective enrollment schools are estimated to be more difficult to get into than Harvard University, something that he hopes to change.

FAU senior Cing Niang said that educators need to support students in a classroom setting to ensure their continued enrollment.

“The most important thing for any student is to not feel discouraged in the classroom,” Niang said.

Stovall then challenged every educator to ask themselves four main questions:

What are you trying to do?
What resources do you have?
What is your day-to-day performance?
Lastly, are you reflecting on these actions to make them better?

Toward the end of his lecture, Stovall opened up the floor to the public for a 20-minute long Q&A.

Following this, members of the FAU Sister circle presented Stovall with a certificate for his community work and dedication to change the conditions in which they live. All attendees were welcomed to purchase a copy of Stovall’s latest book, “Born Out of Struggle: Critical Race Theory, School Creation, and the Politics of Interruption” at the door on their way out.

“Continue to pay attention, to think about your work as connected to other work and also connected to other workers story,” Stovall said as he pounded his fist on the table to encourage FAU students to use their voice for good. “So now here’s the opportunity to make those connections, so wherever you find that work, find pushing yourself to connect it and then understanding this part of its larger history.”