The Office of Diversity and Multicultural Affairs had booths along Diversity Way to educate students about LGBT issues. 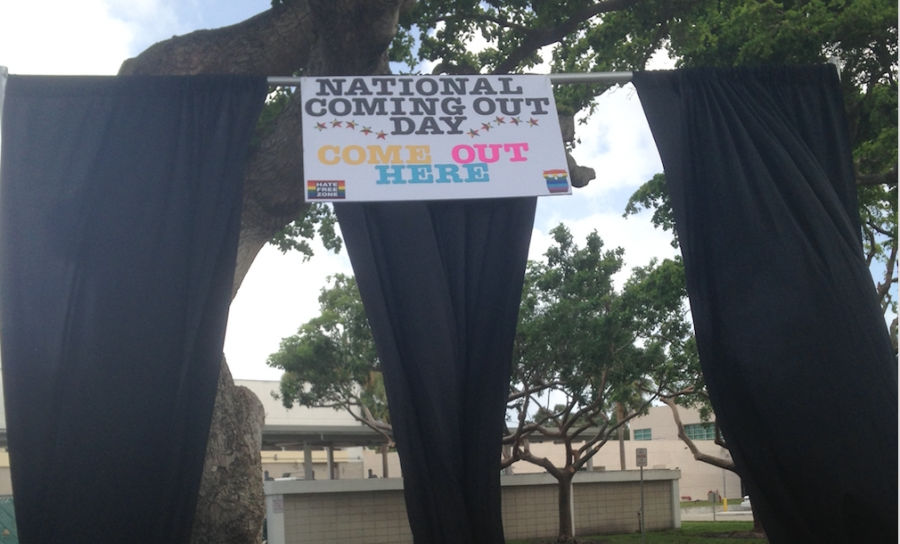 The "Coming Out" doorway on Diversity Way in honor of National Coming Out Day. Hope Dean | Contributing Writer

Clusters of students huddle around tables along Diversity Way answering trivia questions — What does each letter of LGBTQIA stand for? Which country doesn’t observe National Coming Out Day?

Some students nearby have markers in hand as they scrawl down advice for others on a large sheet of paper.

At another table is a face-painting station where one can get a rainbow on their cheek. Matching rainbow cupcakes sit on the next table, waiting to be eaten.

Music provided by Owl Radio thumps in the background. A “Coming Out” doorway made of curtains sways in the wind.

Trivia games, face-painting, and free food were all part of an event celebrating National Coming Out Day, where students could learn about the LGBTQIA community. The event was held on the pathway that connects the Student Union to the Breezeway.

“We want to [say] that there’s a lot of us — that although it may seem that you are alone, there’s always going to be LGBT people around you,” 19-year-old Andre Barris said, treasurer of Lambda United.

Lambda United is a student-run organization, described by Barris as a “social club” to give LGBT student a place to go and a community to join. The organization co-hosted the event with Multicultural Programming as a part of Inclusion Week at FAU.

The event was also affiliated with the “NOH8 Campaign,” a charity organization dedicated to fighting for gender, marriage, and equality.

The process and experience of coming out is different for everyone, and each finds their own meaning in the action.

“Coming out is important to me because I don’t want everyone to see me and automatically assume something that isn’t true about me,” 16-year-old freshman Diana Hart said.

Coming Out Day is also about “trying to overcome that shame and being comfortable with yourself,” mathematics major Amaury Minino said.

Minino said coming out was not easy for him — it was stressful. He said his family took it hard, but eventually came to terms with it.

“I don’t have to hide things anymore. If I have a crush on a guy … That’s not something I have to keep secret,” Minino said.

To many, this National Coming Out Day is a staple that stands for resilience and acceptance.

“It shows that … We’re all still here. [It’s] nothing to be ashamed of … We all come together and be happy and gay together, basically,” student Jada Foster said.

“For a while I was like, ‘I don’t know what’s going on.’ It was a pretty annoying journey, but now that I’m here, I’m comfortable in my own skin again,” said Foster.

Hope Dean is a contributing writer with the University Press. For information regarding this or other stories, email [email protected]