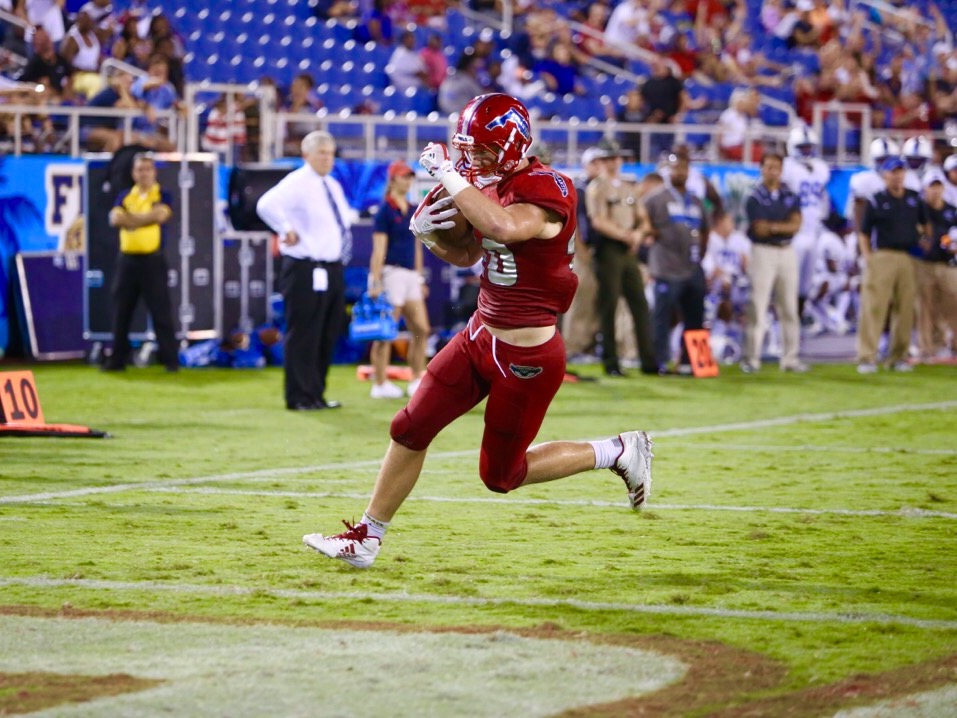 FAU sophomore tight end Harrison Bryant (40) throws his arm up to celebrate the final touchdown of the game in the fourth quarter to make the score 38-20 against Middle Tennessee. The win broke a nine game losing streak against the Blue Raiders. Alexander Rodriguez | Photo Editor

Florida Atlantic football’s struggles against Middle Tennessee State were no secret. Coming into Saturday’s game with the Blue Raiders, the Owls had last beat them in 2007, when they still called Lockhart Stadium home and were coached by Howard Schnellenberger.

In between that time, the Owls dropped nine straight to MTSU, including a 35-34 loss on the second-to-last possession of the game in 2014. This time was different though, as the Owls won 38-20 to earn their first victory over the Blue Raiders in almost a decade.

For head football coach Lane Kiffin, breaking the streak after a 34-31 loss to the University of Buffalo last week was a very big win.

“We talked all week about this being nine long years,” Kiffin said.  “We weren’t here for it but for our fans, our alumni, our players, I can imagine that is tough when you’re playing a rivalry game that you lose nine years in a row. One of the things we said was play really well, win this game as a gift to everybody.”

Sophomore running back Devin Singletary took the spotlight on offense for FAU, rushing for 133 yards and four touchdowns on the night. Singletary paired with senior running back Greg Howell to run for 109 yards of rushing in the first quarter and 221 yards for the game.

Singletary’s multi-score performance tied him for third with Doug Parker for the team’s all time rushing touchdown record with 21 total for his career. He sits behind former running backs Charles Pierre (23) and Alfred Morris (27) on the list.

The strong rush presence followed two previous games versus Bethune-Cookman and Buffalo where the rush attack combined for 701 yards.

A week after Kiffin re-opened the quarterback battle between redshirt junior Jason Driskel and redshirt sophomore Daniel Parr, Driskel got the start for the Owls for the second straight week. He would lead the Owls to a touchdown by Singletary on his first drive and kept up the tempo for the Owls offense.

“I think that tempo was good, especially early in the game,” Driskel said. “We obviously have some stuff we can improve on, we had a couple 12-man penalties, which happens when you play fast. We just have to work on it.”

Driskel finished the night with 187 yards of passing and a touchdown. Parr did not play during the game.

Defensively, the Owls were able to contain the Blue Raider offense from their first drive. Middle Tennessee was kept to two field goals in the first half, letting the Owls to build a 18 point lead by halftime and keep their opponent inconsistent.

Blue Raiders quarterback John Urzua was able to rack up 359 yards of passing and two touchdowns on the night, but running back Brad Anderson was held to only 44 yards of rushing. Anderson only had 33 yards of rushing in the first half, and his team was held to 39 total in that time.

MTSU did not have a touchdown until a 26-yard reception by wide receiver Ty Lee with 9:42 left in the third quarter. Junior defensive back Jalen Young led the Owls with eight tackles on the night, while junior linebacker Azeez Al-Shaair had seven tackles.

Young also made a diving catch on a tipped MTSU pass with 2:12 left in the second quarter and junior cornerback Sheldon Lewis had another with 12 seconds left to cap a strong stretch for the secondary. They would finish with a third pick by senior cornerback Raekwon Williams with 8:11 left in the game.

“There was a couple times we would go for the ball instead of just knocking it down, giving up some big conversions,” Kiffin said. “I thought all along though our secondary is a good secondary, they showed us tonight, but they got a long way to go.”

FAU is now 4-11 all-time versus the Blue Raiders. The conference win marks the first time they won their Conference USA opener since their 17-7 victory over the Charlotte 49ers on Sept. 26, 2015.