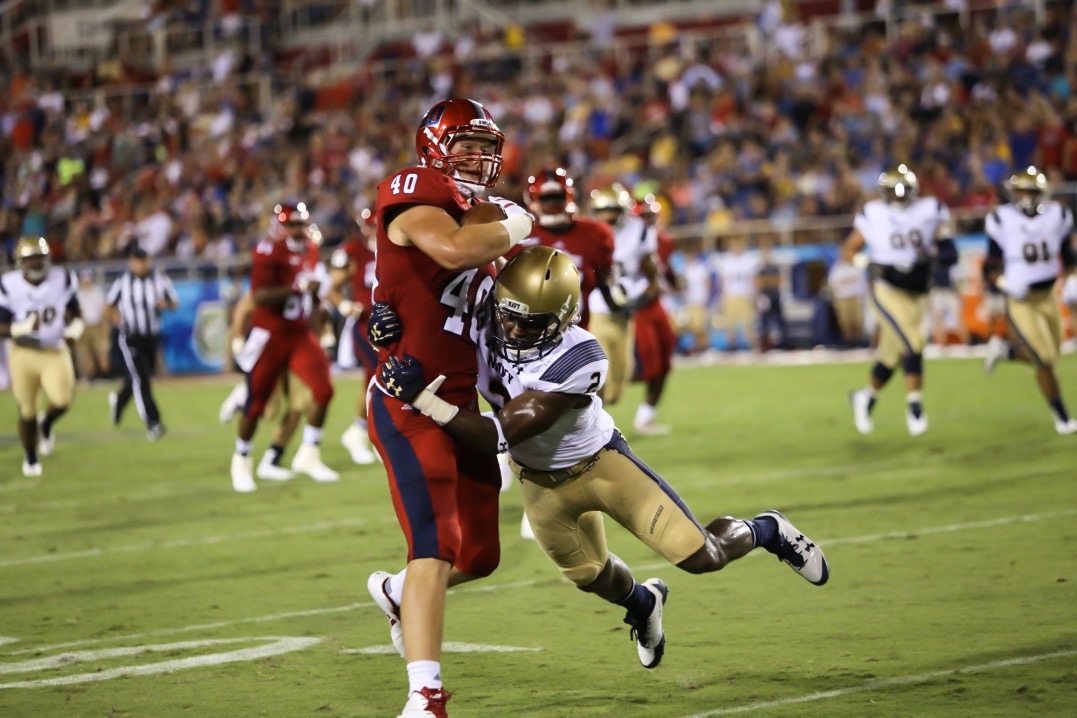 On a day promising change for Florida Atlantic Football, there was still much of the same for a team in transition. The Owls dropped their 2017 season opener 42-19 to the Navy Midshipmen Friday after failing to find a rhythm under new head coach Lane Kiffin.

Going back to 2014, FAU has only won one home opener out of its last five, coming on a 38-30 victory last year over FCS Southern Illinois. Despite the hype surrounding the team coming into the week and a national television audience, they could not change their early season luck.

“That was embarrassing,” Kiffin said. “I thought there was a lot of build up coming into the game, a lot of energy from the fans. We got a lot of work to do.”

On top of the on-the-field issues, the game was delayed three separate times due to lightning. The first came before the start of the fourth quarter for 59 minutes. After the first delay, there were two more lasting one hour and 42 minutes in total.

“We we’re gonna bunker down,” Kiffin said if the delay would have stretched longer. “That’s the kind of team we are.”

Redshirt sophomore Daniel Parr started out the game for the Owls at quarterback, answering the summer-long question of who would start between himself, redshirt junior Jason Driskel and redshirt sophomore transfer De’Andre Johnson. Kiffin said he went with Parr first because of his performance in practice.

“We looked at all the scrimmages combined, all the practices,” Kiffin said. “Looked at completion percentage, their performance in the drills and he earned it. We weren’t going to say you had it because of film from last year or junior college

His performance was not without its inconsistencies though.

Two fumbled snaps stifled drives for FAU, hurting the progress of its offense early. But Parr eventually lead his team to score with his arm, starting with a 95-yard touchdown pass to freshman wide receiver Willie Wright for a 10-7 lead with 7:45 left in the second quarter.

Parr did not find the endzone again, continuing the offense’s struggles on the night. He finished with 281 yards of passing and two touchdowns on 19-of-30 attempts.

Johnson would get his first action with the Owls in the third with 9:09 left, leading the team to two straight first downs before another mishandled snap led to a 17-yard loss. He was taken off the field in favor of Parr and the team would settle for a 54-yard field goal from Graduate student kicker Greg Joseph with 7:25 left in the third quarter.

Johnson finished 2-of-3 for five yards of passing and an interception. Driskel did not appear in the game

Joseph broke the all-time program mark for field goals and tied the mark for extra points with his scores on the night. His 54-yard field goal was also the longest in program history.

Kiffin and company will next travel to play Wisconsin on Sept. 9 at noon. The two teams have previously not met.