Brammer has been interim chief for over a year and a half and has been with the police department for more than a decade. 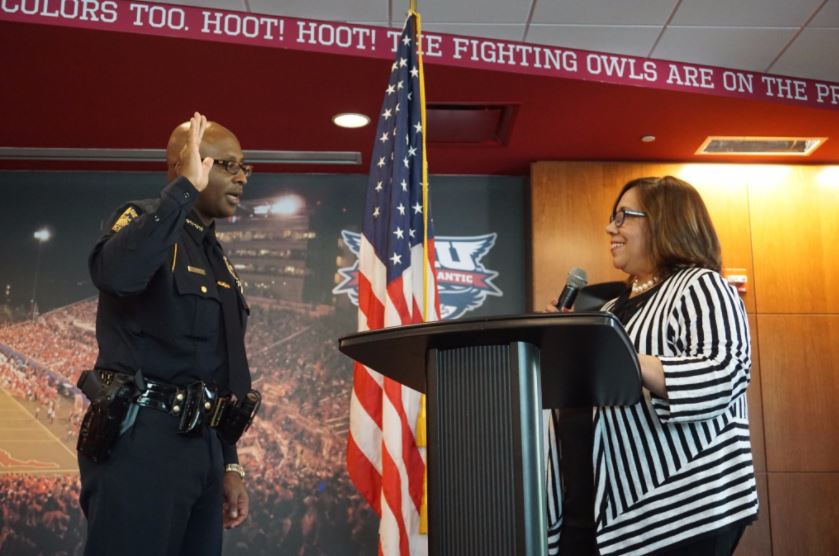 Editor’s note: This conversation has been edited for clarity.

He agreed to speak with me about his experience and approach to the university police department.
Q: What made you want to become a police officer, and can you tell me about your path from the academy to chief of FAU police?
A: I started out with the Florida Highway Patrol about 20 to 21 years ago now.

I used to work years ago when I was going to school at Miami Dade Community College, I was working at service merchandise. We used to have troopers, they would come by and do off-duty detail work.

A friend of mine I worked with at Toys R Us, who was a cashier. One Christmas, after she left, she got hit by a drunk driver. And she was in a coma for about two weeks and a little longer than 14 days. I think that was the turning point in my career.

I said you know what, I need to be, I guess a grain of rice, that can tip the scale to see if I can go out there and help and save.

That’s where it started, and from there I went to the Florida Highway Patrol up in Tallahassee. I spent six months there, came down, I was assigned to Broward County and that’s where the rest of my career started. Broward County until I came along to FAU in 2006 I believe.


Q: What do you feel made you the best candidate for the position?
A: One of the things that I’ve learned through this entire process is and not just because of going through the Chief’s interview — when you apply for a position of this magnitude it’s a great responsibility.

It’s a visionary position. You have to have the heart and the pulse of the institution and you’ve got to at all times recognize that the students are our main concern.

What would make someone choose to come to FAU versus FIU? And this is it — it’s building relationships.

It’s getting into the community, making that impact where you build a relationship — not just with the faculty and staff or the higher-ups.

You have to build those relationships with the students so that they understand that while in the rest of the country and across the world you may have different instances where police officers are the ones that people are kind of having a stigma marked against — how can we break down those barriers?

So people can see that we listen while we’re here, and just like a law enforcement officer in the city of Boca or Palm Beach Sheriff’s Office, we’re not the same where we’re heavy-handed or we’re going to put a handcuff on everybody. But, we’ll give you the opportunity. We have the discretion and the latitude, while we will have to arrest you in some instances.

We don’t want anyone to be naive that crimes don’t occur on our campuses — because they do. But, we want to make sure that we have the community’s trust in us that we’re going to do the right thing, we’re going to respond efficiently and effectively, and we’re here to take care of it.

Respectability is one thing I believe in. If you treat people with respect you’ll get the respect that you deserve. You just need to be talked to like adults.
Q: What is FAU Police Department’s biggest challenge?
A: It’s a change in mindset. Each year by the time you get used to the students you met during orientation and they’re graduating — you’re getting another group in the next year.

The evolving mind sets and the challenges that we have with each generation coming in I think that’s been our biggest challenge.
Q: How do you counter that challenge?
A: I’ve somewhat got our officers trained on how to respond on each change so they know how to adapt to that mindset and the needs of our constituents and that involvement process.

I’ve started hiring FAU graduates. We started to go to the college of criminology and recruiting. They know the mindset, they already know the things they’re seeing.

That way we can mold to any generation to talk their language, but show we’re still the police department. I do want to learn what gets to you, what buttons not to push, what makes you different. I think hiring that current generation helps, half of my department are former Owls.

We want to pull everybody together to say our best service is that we pull in those people we’ve served. They understand the dynamics of a college student. They can come help us navigate the process of understanding the change in demographics, change in mindset.

Our last enrollment was probably about 31,000. So we’re teetering between 30 and 31,000 students, not counting faculty and staff. Even if I had a thousand officers on all our campuses, we still could not be in all places at the same time a crime occurs.

Each person has to have a responsibility as well. All these different little things if you fit it into place. All these little tools that we give you in these moments of crisis, I can definitively say that, yes, you will be safe at FAU.

That’s my goal — to make every parent feel safe of their kids at FAU. It’s going to take us working together. Police officers just can’t do it by themselves, we need your help and the communities help. If you see something, say something.

I would stand up to any parent and say, “Hey, FAU is a safe campus to be on.”

We can’t be naive, to say stuff doesn’t happen. When you have a student that invites a drug dealer on campus to buy marijuana, I can’t prevent that part of it. That’s that person’s responsibility. We’ll do what we have to do, to make sure the environment is safe.
Q: How do you best balance public safety and constitutional/civil rights?
A: Everyone has a right. Freedom of speech, we don’t encroach on that. Our officers, we’ve talked about that. There is training that we do — both daily and monthly — with squads on constitutional rights, domestic violence and dating violence. All the different case laws, we go through it.

Public safety — we’re here to ensure that everybody’s constitutional rights are upheld. I strongly and firmly believe in it.

Everybody has the right. If you want to protest, we’re here to support you.

We’re here so you have a safe environment for you to protest, and protect your rights. If it gets out of hand, then we’ll step in.