Baseball: FAU drops two out of three in series at Western Kentucky

The Owls stranded 29 baserunners in their pair of defeats. 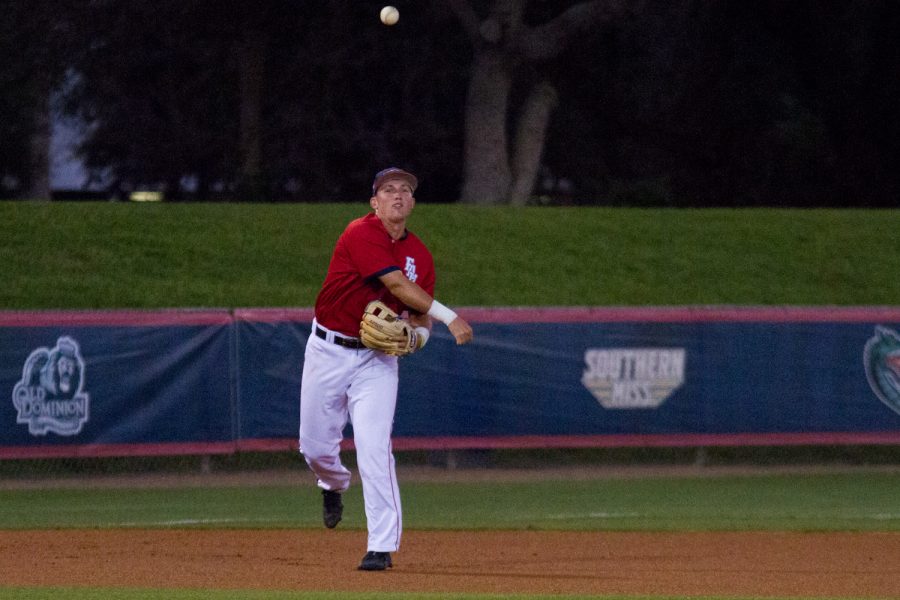 Owls senior third baseman Austin Langham throws a ball to first base during FAU’s game versus the University of Miami on March 1. Ryan Lynch | Editor in Chief

In its last away series of the regular season, Florida Atlantic baseball was unable to climb up the Conference USA standings, dropping two games at Western Kentucky over the weekend.

The Owls (30-17-1, 16-10 Conference USA) lost both games by a combined three runs and won their lone win by just two runs in one of their closest series of the season.

Here’s a recap of each game:
Game one: FAU 4, Western Kentucky 6
Despite leaving 12 runners stranded, the Owls still found an opportunity to win the game after tying the score at three in the sixth. However, Western Kentucky (16-36, 6-21 Conference USA) scored two in the bottom of the inning to put the game beyond reach.

The top of the seventh saw FAU load the bases with one out, but a strikeout and groundout ended the inning before a run could come across. Redshirt junior David Miranda, freshman Pedro Pages and senior Austin Langham each had two hits.

Pages and sophomore Tyler Frank each had a solo home run. Frank’s home run came in the fifth when FAUs was down 3-0 to reduce the gap to two, and Pages’ came in the very next inning and tied the game at 3.
Game two: FAU 5, Western Kentucky 3
The Owls were able to bounce back in the second game and quickly got on the board with a two-out, two-run home run by Miranda in the first, while later adding two more runs in the third.

Despite having their four-run lead cut to one heading to the sixth, redshirt sophomore Blake Sanderson struck out a career-best seven and the bullpen held the lead to give him the victory. The Owls also got some extra distance from their opponent in the seventh on Frank’s 10th home run of the season.

Miranda went 4-for-4 with two singles, a double and the home run as well as three of the team’s five RBIs. Frank was 2-for-3 while adding a double as well.
Game three: FAU 6, Western Kentucky 7
The Owls scored twice in the first and third inning each, but the Hilltoppers chipped away with one in the fourth, tied it with three runs in the fifth and moved ahead with two more in the sixth. Though the Owls knotted it up at six in the top of the eighth with Langham and senior Stephen Kerr’s back-to-back doubles and a Kerr run on a wild pitch, the Hilltoppers got the winning run in the bottom frame.

The Owls went 1-2-3 in order in the final inning  as Western Kentucky closed the series with a win.

The Owls had 15 batters with a hit on the day, but despite that 17 of their baserunners were left stranded. Langham finished 3-for-5.

FAU will next welcome the University of Central Florida in its second game at the Ballpark of the Palm Beaches on Tuesday, May 16 at 6:30 p.m.