The Hillel of Broward and Palm Beach on the Boca campus not only provides a common space for FAU students, but for students from four other surrounding colleges. 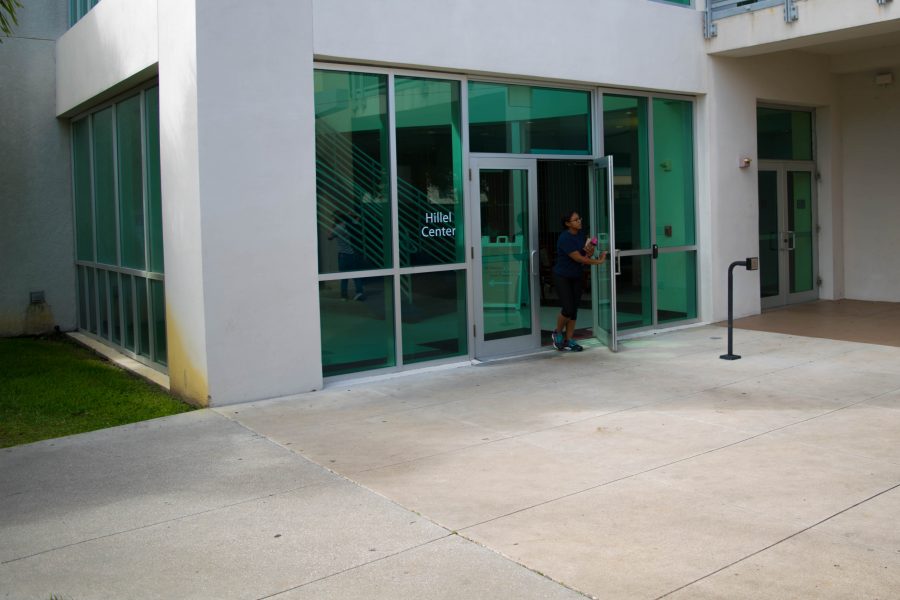 Entrance to the Hillel Center of the Boca Raton campus. Photo by Craig Ries

Despite the small space that is the Boca campus Hillel of Broward and Palm Beach, the students hanging out in the lobby have made it their own. Whether taking a nap on one of the couches, arguing about politics with friends, talking to a staff member or focusing on homework, everyone looked right at home.

Hillel is a nonprofit international organization based on college campuses in the United States. According to its website, its goal is to inspire every Jewish student to make an “enduring commitment to Jewish life, learning, and Israel.”

While the Hillel of Broward and Palm Beach is based on the FAU Boca campus, it is responsible for students at four other colleges: Palm Beach State College, Nova Southeastern University, Lynn University and Broward College.

“Hillel provides cultural, social, and religious opportunities for students to get together and for non-Jewish students on campus to learn about the Jewish community,” Adam Kolett said, the executive director of the Hillel of Broward and Palm Beach County.

Hillel itself is an international brand, but at FAU it runs through a small part of the All-Night Study Center building. Students make themselves comfortable in the lobby engaging with peers and staying updated on events via Hillel’s giant chalk wall.

Meanwhile, staff are hard at work in their offices right next door.

“A large part of our programming isn’t at all connected to the religious aspects of the Jewish faith,” Kolett said. “Students can find that at Hillel if they’re looking for it, but students can also find a lot of connections to other areas of what it means to be a part of the Jewish community.”

Senior program associate Tali Amihud described the “immersive experiences” offered by Hillel, while admiring her clutter of post-it notes and photo booth pictures with students in her cubicle.

She said students are usually drawn in by Birthright Israel, which is run by a separate nonprofit and offers a free 10-day trip to Israel to any Jewish person between the ages of 18 and 26. Hillel is one of the trip’s organizers.

There are also off-campus trips funded by Hillel. Its Alternative Spring Break consists of a week in New York, where students help to build a stronger community by doing community service. FreshFest is a weekend getaway at the Beachcomber Hotel in Pompano for college freshmen, allowing them to engage with other students and gain more knowledge of what Hillel has to offer.

According to Kolett, Hillel also offers smaller scale programs that “welcome all students on campus at every single event.”

Amihud continued to discuss the simpler events. Bi-weekly Shabbats are set up in Hillel’s event room, offering all students religious services and a free dinner on campus. Occasional bakes featuring challah, a type of bread used on Shabbat, community service events and holiday parties are also held throughout the year.

Although Hillel isn’t necessarily religious, there is a campus rabbi present.

Rabbi Rose Durbin, FAU’s campus rabbi, said, “My basic role is to create a Jewish educational vision for the Hillel,” in addition to making sure that all existing programs have “more Judaism infused in it.”

Durbin talked about a program she handles called Lunch and Learn, in which she speaks about a topic she thinks is relevant to the life of a college student and explains it in terms of Judaism. Free pizza is offered every Wednesday during the event.

Both Amihud and Durbin said that they were heavily involved in Hillel as college students since it offers opportunities for students such as paid internships and administrative work.

Daniel Friedman, a senior at FAU who has been active in Hillel his entire college career, said, “I never understood what it was like to be culturally Jewish … you don’t know what being Jewish is until you’re immersed in the culture of Judaism.”

He continued to say that Hillel helped him understand himself and his faith better by providing him with culturally Jewish experiences like Birthright Israel and Alternative Spring Break.

Friedman also took the time to write a testimonial for Hillel. Dealing with a tragic loss in his family, he turned to Hillel in his time of need.

“My world was falling apart. I didn’t know what to do, or even how to talk to people about what happened,” Friedman wrote. “So just like every other day, I walked into Hillel. Each staff member approached me and comforted me as members of a family would, showing me unimaginable love and support. They were there for me through it all, making sure I would be okay. I am able to stand here in front of you today because of them.”

Amihud backed Dan’s statement. “Hillel gives students a place on campus to call their home,” she said. “This is where their friends are, this is where they go between classes, where they feel safe.”
Michelle Rubinov is a contributing writer with the University Press. For information regarding this or other stories, email [email protected] or tweet her at @mishka__rubin.