Two of the games went beyond the seventh inning. 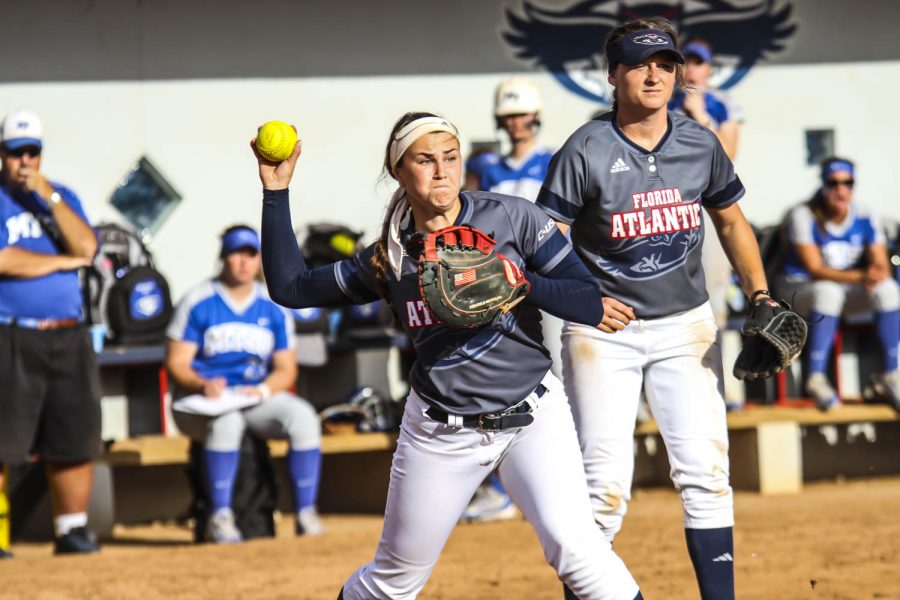 Sophomore Lauren Whitt (19) throws the ball toward first base a Middle Tennessee player hit a ground ball to her during her team's game on April 14. Alexander Rodriguez | Contributing Photographer

FAU Softball defeated Middle Tennessee State University twice and lost once over the weekend in one of its most hard-fought series of the season.

Two out of the three games of this series went to extra innings,which head coach Joan Joyce noted how the Owls (29-16, 9-6 Conference USA) have been playing in a lot of close games lately.

“We went nine innings in game one versus FGCU, then lost three to Marshall and all those games were pretty close, and FIU before that was pretty close as well,” Joyce said. “It seem like they have all been close, but when I don’t have [senior pitcher] Kylee [Hanson], that makes a huge difference. It’s been very interesting for sure.”

Hanson is still recovering from an ankle injury she suffered during a Feb. 17 win over Tulsa, and there’s still no timetable for her return.

Here’s a recap of each game:
Game one: FAU 5, Middle Tennessee 4 (9)
In the first inning, junior Emily Lochten hit a homerun to right center field making this her 16th on the season. She finished 2-for-2 for the game.

Junior Tatum Buckley scored the second run of the inning on a double to left center by Olson.

The Blue Raiders (14-23, 4-11 Conference USA) scored in back-to-back inning to tie the game at four heading into the seventh.

Neither team could reach home plate until the bottom of the ninth when sophomore Samantha Lageyre scored the game-winning run on a sacrifice fly by freshman Kaitlyn Burke. There were 25 batters left on base between FAU and Middle Tennessee.

Sophomore Mia Olson went 4-for-4 and had two RBIs, while junior Alex Miller went 2-for-4.

Buckley pitched the complete game and allowed four runs on 10 hits with four strikeouts.
Game two:  FAU 3, Middle Tennessee 2
The Blue Raiders scored the first run of the game in the first inning, but FAU bounced back in the bottom of the third inning when Lageyre scored on senior Delaney Rickey’s groundout to third base. Sophomore Sami Williams scored another run for FAU in the next inning while pinch running for Olson on junior Lauren Whitt’s single.

Middle Tennessee would tie the game at two in the top of the sixth and both teams would head to the last inning even. FAU held Middle Tennessee scoreless in its turn at bat and Miller drove in sophomore Summer Damiano for the game winning run on a single to left field in the bottom of the inning.

Buckley and Miller each went 2-for-4, while junior Amanda Peck and Lageyre each were 2-for-3. Senior Amanda Wilson pitched the entire game, allowing two runs on six hits while adding two strikeouts.
Game three: Middle Tennessee 2, FAU  1 (9)
FAU would take a 1-0 lead at the bottom of the third when Rickey’s double scored sophomore Madisyn Palmer. However, Middle Tennessee would answer right back in the bottom of the same inning, tying the game with an RBI triple.

For the second time in the series, the game would go on to the eighth inning, where the Blue Raiders immediately took the lead. The Owls were unable to recover in the bottom of the inning as all three batters struck out.

Rickey finished 2-for-4 to lead FAU and Palmer was 1-for-3. Wilson allowed just two hits versus nine batters.