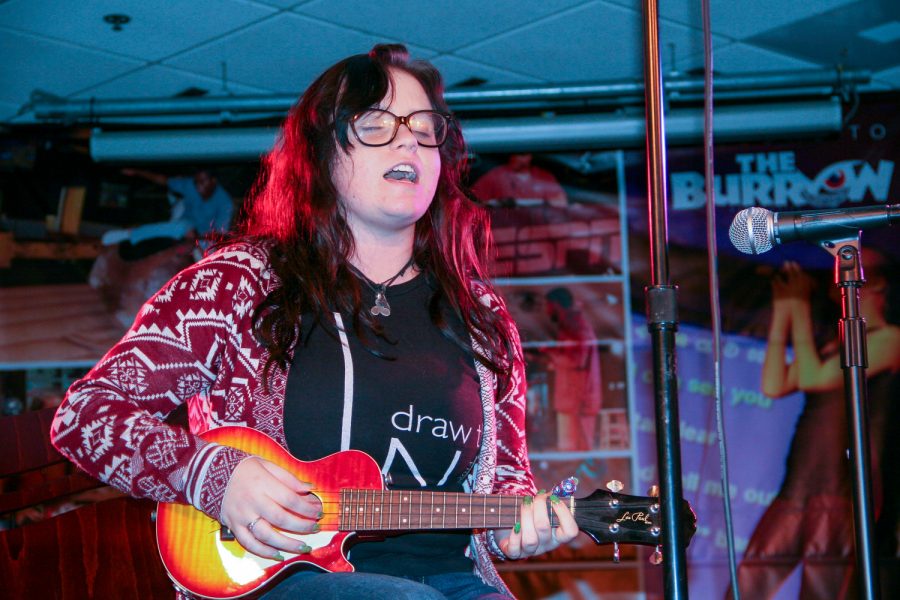 Kristyn Spatz expressed the loss of her boyfriend to suicide through her live performance. Thomas Chiles | Contributing Photographer

The event was hosted from 6-10 p.m. by the FAU chapter of the non-profit organization “To Write Love on Her Arms” and supported by the Life of Purpose addiction treatment center and Collegiate Recovery at FAU.

Chapter President Coral Undzis said the event provides a space for students to express their feelings about mental health issues such as depression, anxiety and suicide.

“It gives an outlet for students to share personal stories,” Undzis said. The FAU chapter of the organization has been active for over a year and half and this is the second annual Hope N’ Mic Night that has been held.

“Last year, the open mic night was held in a teeny tiny lounge and planned in two weeks,” Undzis said.

The open mic night was filled with a diverse range of skills and talents, ranging from poetry and spoken word to live musical performances.

Many students attending the event had a personal connection to mental health issues and took the opportunity to express themselves on stage.

Musician Kristyn Spatz, performing under the moniker Little Sparrow, performed a set of ukulele and acoustic guitar songs. Spatz shared her story of losing her boyfriend, Allan Rivas, while she was an FAU student last year.

“Last year I was performing at this event with my boyfriend,” Spatz said to the crowd. “About 11 months ago he committed suicide.”

Before his passing, Rivas was the bassist for local band Diamond Aces. His surviving bandmates took the stage in remembrance of their friend.

“The last show we ever played with him was right here, on this stage, a year ago,” said Javier Palmieri, lead singer of Diamond Aces. “We will keep doing the show, as long as it’s around, because it means so much to us.”

Guitarist and singer Zach Cohen struggled with drug and alcohol addictions and is a member of the Collegiate Recovery Community at FAU. He shared his story of losing one of his rehab roommates to suicide before performing a strong rendition of “You Can’t Always Get What You Want” by the Rolling Stones.

Some performers, such as ukulele player Andrea Palmieri, took the stage to show their support for the event although they were not struggling with mental health issues themselves.

“I’ve never dealt with any depression or anything but this music helps me get through my bad days and keeps me positive me all the time,” Palmieri said.

As the night came to a close, chapter President Undzis took the stage and ended the show with an acoustic guitar set of her own.

“It was so good,” Undzis said, as students left the Burrow. “We definitely had way more people than we expected.”

The next general meeting for the To Write Love on Her Arms FAU chapter is scheduled for April 19. Visit Owl Central to RSVP for the meeting.

Thomas Chiles is a contributing writer with the University Press. For information regarding this or other stories, email [email protected] or tweet him @thomas_iv.