Late-night food options on and around the Boca campus

Whether you stay up late to party or study, here are some food options to keep you fueled. 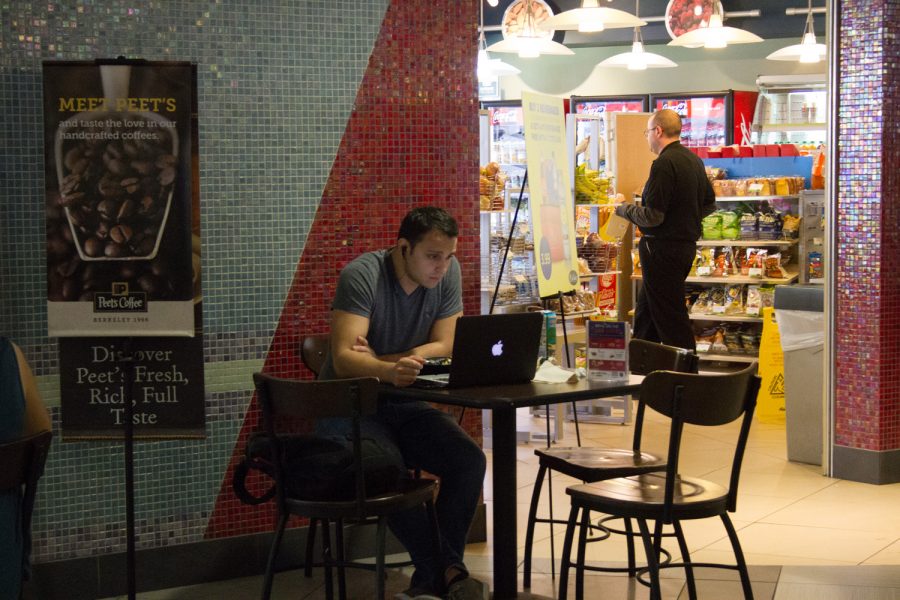 Rafael Ramos sits in front of Outtakes, as he works on his laptop. Adriana Laplanche | Contributing Photographer

Let’s face it. If you live on campus, it’s no secret that late-night food can be difficult to come by. So if you’re new to FAU or just tired of eating leftover takeout from the dining hall, here are some food options on and around the Boca campus.

FAU’s Burrow Bar and Grill in the Student Union offers delivery to the campus dorms from 6-10 p.m., while the restaurant itself is open until midnight every day.

The grill’s menu features “Talon Teasers” such as cheese-stuffed jalapenos for $6.99, or a “Gourmet Parliament” bleu cheese burger for $7.99. Other options include various types of salads, quesadillas, sandwiches and wraps.

The establishment also hosts a wide assortment of events such as karaoke nights and live bands and even has a few billiard tables available for a casual game.

Subway, found in the FAU stadium, is open until 2 a.m. on weekdays and midnight on weekends.

Domino’s on NW 2nd Ave. delivers until 2 a.m. Mondays through Thursdays, as well as Sundays. The pizza chain delivers until 3 a.m. Fridays and Saturdays.

Steak ‘n Shake, which is about a 10-minute drive from campus, is open 24 hours, as is Denny’s and the McDonald’s on North Federal Highway. We recommend Denny’s Super Blackberry Pancakes for $4 or their Philly Cheesesteak Omelette for $8.99.

Boca’s Best Pizza Bar, which is only a six-minute drive from campus, offers dine-in, takeout and delivery until 2 a.m. Mondays through Saturdays. On Sundays, the restaurant is open until midnight.

Rocco’s Tacos late-night hours are also impressive, as the restaurant is open until 1 on most weekdays and until 12 on Sunday and Monday. We recommend not buying their coffee. First of all, you need to sleep sometime, and second, they charge you for refills. What restaurant charges you for coffee refills?

Here are a list of places open late to curb your midnight hunger pangs.

ON-CAMPUS:
SUBWAY: Open until 2 a.m. on weekdays, midnight on weekends

Hope Dean is a contributing writer with the University Press. For information regarding this or other stories, email [email protected] or tweet her @hope_dean2017.