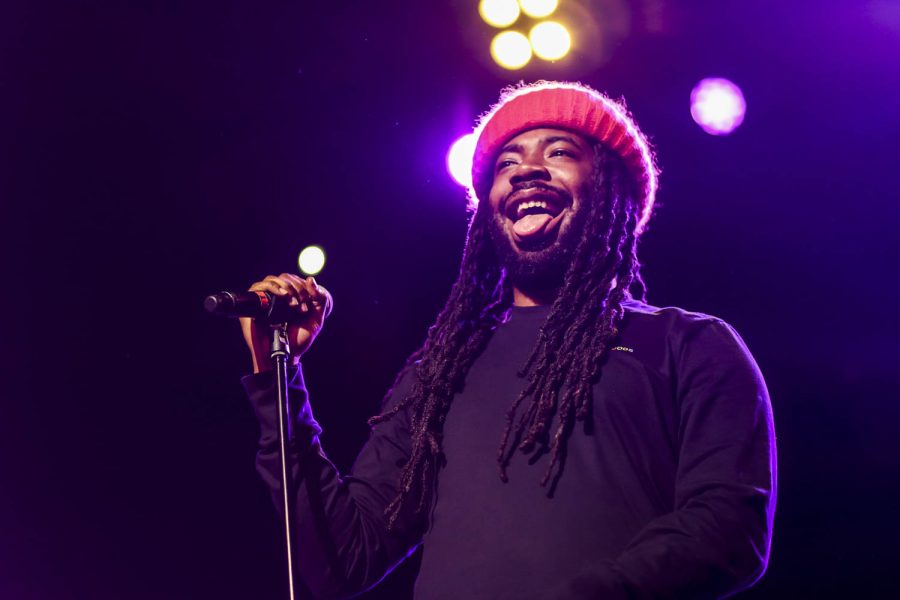 D.R.A.M sticks out his tongue with a smile at FAU’s Fly On Fest. The concert was reported as sold out according to Program Board. Alexander Rodriguez | Contributing Photographer

The Boca campus Carole and Barry Kaye stage took flight Wednesday night as old and new hip-hop artists performed in a show that sold out minutes before the first act.

Waka Flocka, D.R.A.M. and the new acapella/hip-hop group Kazual performed at FAU’s first ever Fly On Music Festival, put together by Program Board and Owl Radio.

“The selection of performers was a long and extensive process. Conversations pertaining to artist selection involved many member of Student Government, Owl Radio, and Program Board,” Assistant Director of Student Activities and Involvement Richard Mahler wrote in an email. “We attempted to work within budget allocated by all event partners, to provide the best lineup possible for the new campus tradition.”

Students walked into the auditorium as DJ Alex Roy and DJ Redwood primed the stage with popular songs that had students dancing in the crowd well before the show even started. Students were able to live tweet the show with the hashtag “FlyOn2017,” and had the chance to have their tweets shown on the two projector screens all throughout the show.

Up and coming group Kazual, whose music combines hip-hop and acapella vocals, served as the show’s opener.

Playboy, one of the group’s four members said, “We’d like to welcome everyone to the Kazual experience.”

They started their set with what they called “play-stop acapella,” where they led into a song with a track and took off using only vocals. Songs like “My Girl,” and “If I Was Your Man” paired with some of the group’s original music had the crowd cheering along to the non-traditional barbershop quartet.

The real star of the show was Waka Flocka Flame who came on after a countdown from his personal DJ. From the moment he took the stage, students throughout the auditorium jumped up from their seats and sang along with the rapper’s biggest hits.

“Put your middle fingers up if you don’t give a fuck and you’re still going to chase your dreams,” Flocka shouted to the crowd. “If you’re shooting for the stars, put your guns in the air.”

The audience was wild throughout his performance as he headbanged across the stage and freestyled between pauses in his songs — taking every opportunity to yell his token, “Bow! Bow! Bow!” to screaming students.

The highlight of the show was Flocka jumping into the crowd and walking from section to section, rapping along to his songs as he climbed over rails and took pictures with as many students as he could.

After returning to the stage, Flocka ended his set with a long and dramatic freestyle and then walked off stage — leaving the projector screens flooded with tweets from students praising his performance.

After Flocka’s energetic, bass-heavy rap set, the show wound down with hip-hop artist D.R.A.M., whose music was more focused on vocals and the talent of his backup band.

“We’re just looking for a little bit of love,” D.R.A.M. announced to the crowd, and went into his songs about homesickness, spreading the love and of course, spending lots of money.

D.R.A.M.’s performance was lighthearted — his casual dance moves to songs like “CHA CHA” and “Cute” were mixed with periodic questions to the crowd, like asking all the pretty ladies in the audience to scream if they knew they looked good.

After one song, D.R.A.M. walked off stage, leaving his piano player to go off on a long, complex solo that caught the crowd off guard but impressed them nevertheless.

After D.R.A.M.’s set, students called for an encore. His emcee came to the crowd and told them to hold up their flashlights for one last song and the audience cheered as D.R.A.M. finished the night with an upbeat, vocal-heavy song and reminded the crowd to “keep chasing their dreams.”

“Tell yourself these four words,” D.R.A.M. said to the crowd. “You are very special.”