Commentary: Bye Pye? Not yet

Student Government is keeping me from my job, but I’m doing it anyway. 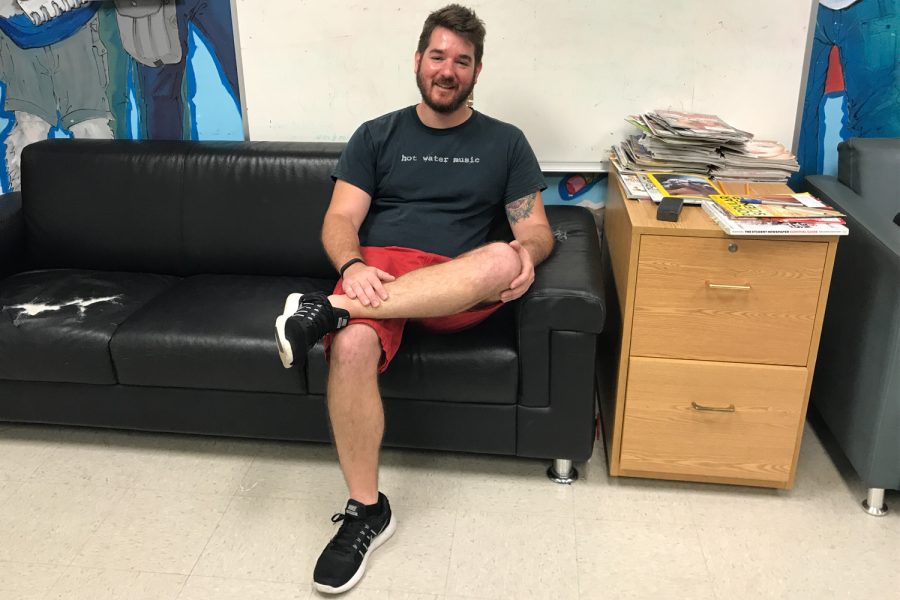 Meet Joe Pye, your new Editor in Chief. Or is he? Ryan Lynch | Business Manager

The press should serve as a watchdog over the government, public figures and businesses, among others. Journalists should be responsible for policing these organizations — unless of course you’re a student journalist at a school that prevents you from doing just that.

To earn the title of editor in chief of the student paper, the FAU University Press, you have to earn the majority vote of your staff (which I won, 12-0) and go through an internal panel selection process made up of professional journalists and the UP’s current editor in chief.

Following that, you must go before a panel called the Student Media Advisory Board, which is made up of professional and student journalists, a former journalism professor, the outgoing editor and the Student Government president. (I won 8-0.)

But wait, that’s not all. Then you also need to have your job confirmed by the university-wide Student Senate.

In the end, this amounts to a nearly month-long process — a process that can end illegally.

During the Senate meeting, I was asked what position I would be taking at the University Press and what I intended to do with my job.

I responded, “Sure, I am going to be editor in chief of the newspaper, uh what do I plan to do? Keep watchdog on you guys.”

A few minutes later, after a discussion about putting newspaper bins on FAU’s satellite campuses, I was voted down 5-2.

It’s a conflict of interest for Student Government officials to select the leader of a student newspaper that will police their actions, according to the Society of Professional Journalists’ Code of Ethics.

Media attorney and executive director of the Student Press Law Center Frank LoMonte called this rule “an invitation to break the law.”

One Student Government member, who abstained from voting, recognized that this process is unethical during the Student Senate meeting where I was supposed to be confirmed as editor in chief.

“Isn’t it ironic that we, the Student Government, votes for [our own] watchdog?” Senator Joseph Kass asked. “It just kind of seems … like an unusual principle.”

What if an editor was too friendly with Student Government? They may appoint him simply because of his personal relationship with them.

Or, what if an editor told the members his plan to write better content was to keep watch over them? They may deny that editor his job, which is what happened to me.

Society of Professional Journalists Region 3 director and UP volunteer adviser Michael Koretzky wrote, “… at a public university, the newspaper can’t be punished for anything to do with its content – that’s the very definition of the First Amendment.”

During my interview, I was asked what I would do about distributing print issues to the Dania Beach campus. I didn’t have much to say because the campus teaches fewer than 150 students total out of FAU’s 30,000 student population.

I responded, “Yeah, we do distribute on Jupiter and Davie.”

“Right, but any additional, or change, or just status quo?” Kass asked.

“No I’m going to keep it the same as it is, you guys have bins on the Davie and Jupiter campuses,” I responded. “If you guys put them on the Fort Lauderdale campus, I will distribute my papers there, if not, I don’t know how I’m going to change that for you.”

The funny part about that question is, Student Government has cut our budget so drastically over the past few years, we can barely afford to print all 16 issues.

For the 2017-18 fiscal year, I have a budget of $59,865. Apparently, the best thing for me to invest in is an additional newspaper bin for the Dania Beach campus, not the website like I had suggested to them.

Calling my plans for editor “status quo” felt like a low blow. If the senators had attended SMAB, or had a clue about the editor selection process, they would know my plans for the newspaper next semester. Here’s one that I’ve made very clear: to cover Student Government extensively.

I sat before two panels that included professional journalists where the majority felt I was qualified to take on the position. But, I guess members of the Student Senate feel they know more about journalism than professionals do.

Any member of my news organization over the past 20 years knows how daunting the task of getting through the editor in chief selection process is. They can also tell you about Student Government’s history of breaking the law and making stupid mistakes.

After a year and a half of writing at my college newspaper, I ran to be editor in chief and won unanimously. It was the proudest moment of my college career. I worked my ass off, I impressed all the right people, but guess who had the final say — the wrong people.

The fact that Student Government has been confirming the UP editor in chief position for the past 10 years is a travesty and an even bigger conflict of interest.

Why did people who don’t understand student media, vote against me? I suspect intimidation had something to do with it.

That’s at least what I picked up on. Being told they would be held accountable rubbed them the wrong way.

Well, deal with it, I’m not changing and neither is the University Press.

Joe Pye should be the editor in chief of the University Press. For information regarding this or other stories, email [email protected] or tweet him @jpeg3189.