FAU scored 24 runs over the weekend. 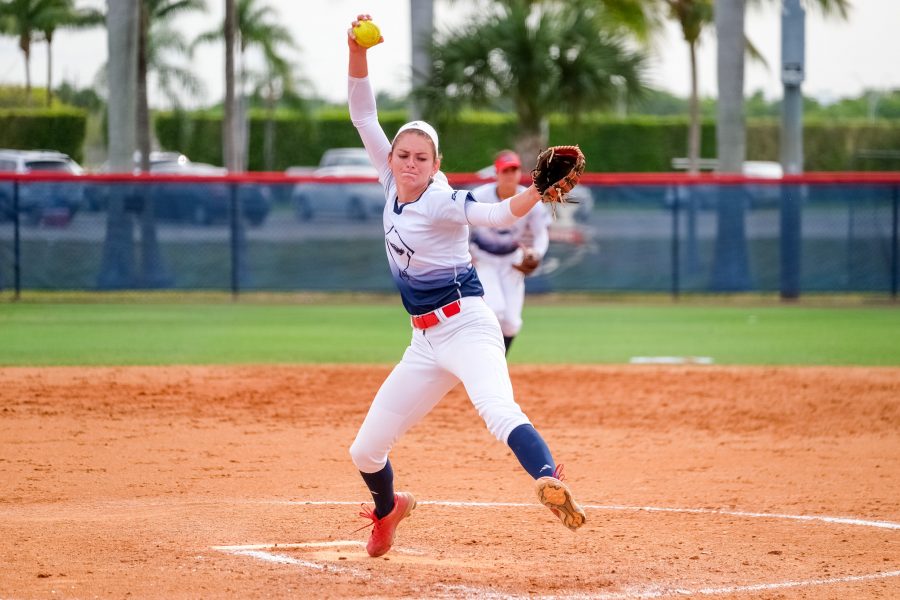 Senior pitcher Kylee Hanson picked up her first loss of the season against Kentucky, but still stands at 5-1 with a 0.91 ERA. Photo by Mohammed F. Emran

Florida Atlantic softball won four out its five FAU tournament games this past weekend behind a solid offensive performance.

The Owls (12-3) scored 24 runs on the weekend and only gave up eight, six of which came in the loss versus the University of Kentucky.

Here’s what you need to know about the weekend’s games:
Game one versus Connecticut:
In the top of the third inning, junior Amanda Peck and sophomore Madisyn Palmer scored on a two-RBI single to center field by senior Delaney Rickey.

Sophomore Samantha Lageyre got on base via a bunt in the fifth inning, stole second and then scored on a throwing error by the Arkansas shortstop.

In the top of the seventh, junior Emily Lochten hit a home run to right center to bring in the final run of the game, her eighth of the season.

Peck went 1-for-2 and added a run. Rickey finished with two RBIs.
Game two versus Arkansas:
The Razorbacks took an early 1-0 lead in the second inning when junior Tori Cooper hammered a ball to center field. However, in the fourth inning, Lochten would tie the game at one, after she stole third base, then reached home courtesy of a throwing error by Arkansas’ catcher.

In the bottom of the fifth, Lageyre brought in two runs with a double down the left field line to seal the game for FAU. She finished the game with two RBIs.

Senior Kylee Hanson had 11 strikeouts on the day.
Game three versus Florida A&M University:
Lochten hit a homerun to right center field to lead off the game. In the second inning, freshman Fayth Davis walked, was sacrificed to second via a bunt and scored on a FAMU throwing error.

In the sixth and final inning of the game, Lageyre walked, advanced to second and third off wild pitches and was driven in by Palmer.

Lochten finished the game with three runs and two RBIs. Palmer went 3-for-4 with two RBIs and Lageyre was 1-for-2 while also bringing in two runs.
Game four versus the University of Kentucky:
The Owls took a 1-0 lead in the bottom of the third when Lochten reached home after Palmer doubled left field. However, Kentucky exploded for three runs in the top of the fourth, as freshman Brynlee Bigelow, sophomore Abbey Cheek and junior Brooklyn Hinz each scored a run to hand the Wildcats a 3-0 lead.

The Wildcats would score three more runs in the fifth inning to take a 6-1 lead. Lochten would then hit a home run to left center and score the final run for FAU .

Kylee Hanson suffered the loss and fell to 5-1 after 3.1 innings of work and three earned runs.

Senior Amanda Wilson closed out the game with 3.2 innings of work. She was charged with three unearned runs and gave up six hits.
Game five versus Memphis:
Lochten led off the game with a home run to right field, the second game in a row she began the game that way. In the bottom of the third inning, Palmer got on base via a bunt, stole second, then scored on a junior junior Alex Miller single to left field.

Palmer went 2-for-3 while bringing in three runs.

The Owls will take their first road trip of the season to take part of the LSU Purple & Gold Tournament on Friday, March 3.