All the teams victories came in shutouts. 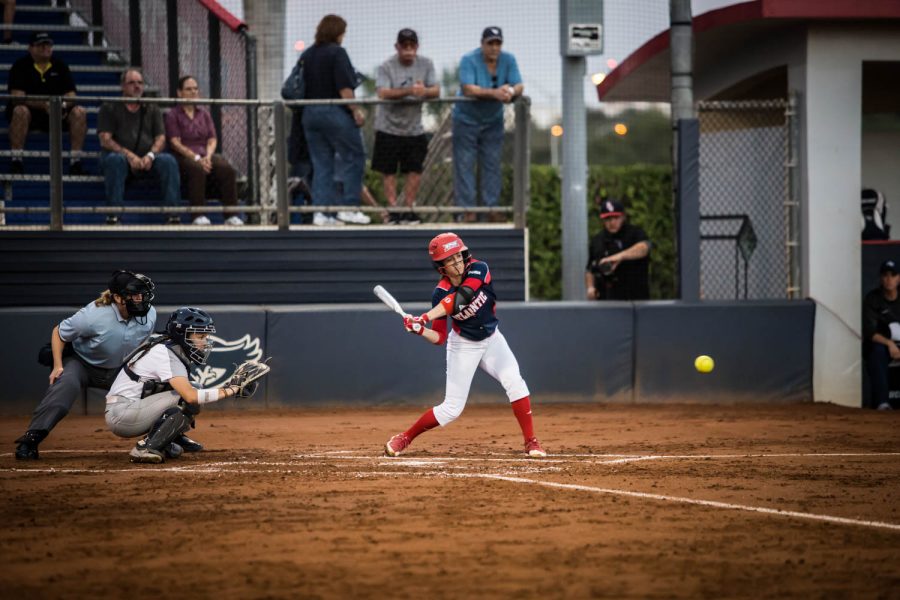 Behind a stellar performance from Junior Emily Lochten, Florida Atlantic softball won three out of four in their opening weekend series. Lochten finished the weekend with four scores, five hits, a home run and a RBI.

The Owls (4-2) bounced back from their opener Thursday night, in which the team split their first pair of games versus North Florida.

On Saturday, FAU was able to hold Bethune Cookman scoreless for its second shutout of the year, taking down the Wildcats 15-0. The Owls then closed out the FAU Kickoff Classic on Sunday with another shutout, defeating Michigan State 5-0.

Here’s a recap of the weekend’s games:
Game one versus North Carolina State:
Emily Lochten led off the bottom of the first with a single before stealing second. The junior then scored on the next  play on a North Carolina State wild pitch to give the Owls a 1-0 lead.

Lochten finished 2-for-3 on the night.

Junior Alex Miller then followed with a single, allowing sophomore Madisyn Palmer to score the second run of the game for FAU .

Kylee Hanson had a complete game four-hitter and struck out 10 Wolfpack players.
Game two versus Boston University:
Lochten reached on a single and then stole second, third and home to give the Owls a 1-0 lead in the first inning. Senior pitcher Amanda Wilson was able to hold Boston College until the bottom of the seventh, but she was unable to finish the job.

Gabi Martinez began the comeback effort for Boston University, reaching on a fielding error that allowed a run to score. Kaitlin Sahlinger then singled, allowing Martinez to score her team’s second run of the game.

Rachel Levine then singled out to right field and was tagged out at second base, but not before Sahlinger would reach home to extend the Terriers’ lead.

FAU still had a chance to get back into the game at the bottom of seventh inning, but weren’t able to do so.

Lochten went 2-for-2 and scored lone run of the game for the Owls, while Palmer, sophomore Lauren Whitt and junior Amanda Peck each added a hit.
Game three versus Bethune-Cookman:
In the third inning with one out and bases loaded, sophomore Mia Olson was able to hold Bethune-Cookman without a run. Lochten then belted her two-run homer to give a FAU an 8-0 lead.

In the fourth inning, Olson continued to help her team with two home runs. Sophomore Samantha Lageyre had a triple down the right field line and then scored on a wild pitch.

Olson finished with five RBIs, while Whitt and Lochten added an RBI each. Olson also had five strikeouts and only allowed three Bethune-Cookman hits.

Eight of the Owls 10 players recorded at least one hit for the game.
Game four versus Michigan State:
Lochten continued her great weekend by scoring the first run of the game, running home on a Michigan State wild pitch after her hit. Later in the same inning, Miller scored on a Palmer single to left field.

FAU would continue to keep its foot on the gas in the fifth inning, as Lochten had a leadoff single, stole second and then scored on Buckley’s RBI single.

Lochten then came up with the bases loaded in the sixth inning and her hit allowed freshman Sami Williams to score. Palmer followed with a infield single, allowing Peck to score the final run of the game.

Lochten finished with two runs and three hits, one of which drove in a run. Miller went 2-for-3 while Buckley, Palmer and her each finished with an RBI.