Opinion: NCAA athletes should be seeing a larger share of money

Students built the reputation of schools, so they should be the first to get paid. 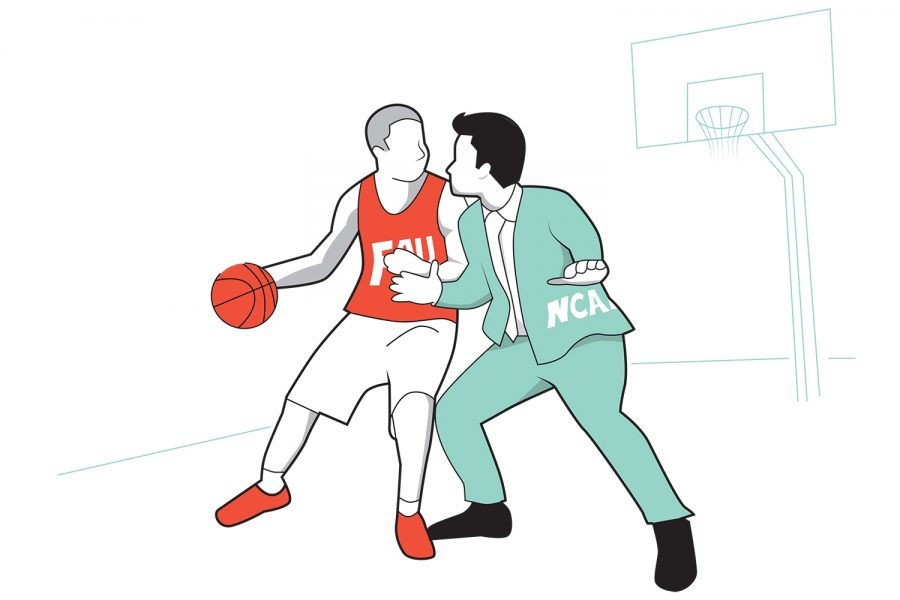 The NCAA is a multi-billion-dollar nonprofit that does not pay its employees, and I’m not talking about the men and women in crisp office attire who manage the organization. I’m talking about the countless athletes who compete at one of the hundreds of schools that fall under the NCAA’s jurisdiction.

For college athletes, the case has been constantly made that for all the money and donors they bring to the school, an education at the university is enough compensation to justify the amount of time they put in.

On its website, the college athletes organizing body states, “The NCAA membership has adopted amateurism rules to ensure the students’ priority remains on obtaining a quality educational experience and that all of student-athletes are competing equitably.”

The problem with that rule is that between practicing every day, missing classes due to traveling and working on school work, students can’t take advantage of their education and deserve compensation to make up for it.

Here’s the case for student athletes to get a little extra pay.

College athletes may be given access to tutors and have first priority when it comes to selecting classes around their athletic schedule, but they are not given scholarships to “play school.”

Athletes often take general studies majors that allow them to focus the majority of their time on their athletic careers. While there are exceptions to the rule — including athletes who take on graduate work while still playing — most do not have enough time to focus on both academics and athletics at the same time.

Using Florida Atlantic as an example, its most recent Graduate Success Rate — a measure of how many college athletes graduate within a six-year window — was listed at 79 percent for the 2015-16 year and ranked FAU 261 out of 351 schools.

While the GSR is the best ever in the school’s history, it should be much higher if FAU puts more of an emphasis on academics over athletics.

When players do well in the classroom, coaches can receive bonus money in their contracts.

According to former head football coach Charlie Partridge’s contract, he could have made up to $45,000 in a single season if his team had reached certain milestones, such as a team GPA being over 2.7 or ranking in the top 10 percentile for collegiate football teams in the nation.

The case could easily be made that this is unfair for students because they are generating money both on and off the field but do not see it directly. While some just dismiss it as a consequence of being in the system, I believe that the standard should be much higher than that.

Not being able to work

Most athletes do not have the time to get jobs on top of their course loads as they spend an NCAA mandated maximum of 20 hours per week on practice alone. Add coursework, games, mandatory community service opportunities and sleep to that, and suddenly there is a lot less room in an athlete’s schedule for a job.

Even if players had that extra time to get a job, NCAA rules don’t allow for one that pays over $2,000 annually, to the point that the extra stress is not worth a few bonus paychecks.

With that inability to pick up work, some student athletes are left at a disadvantage from their counterparts in the regular student body who can work. A scholarship does not cover every cost that a student may run into, especially if it is not a full ride to the school.

The realization that a scholarship isn’t enough has caused a change in philosophy with the Power Five conferences.

At FAU, that change is already apparent. To put itself on par with other national programs that offered a cost of attendance stipend — which provides athletes with extra money for things like transportation and other costs outside of school — FAU moved during the spring of 2015 to provide $4,650 stipends to all student athletes at the school at a cost of about $1 million to the program.

“When it comes down to it, any additional financial aid for our student athletes we’re all for at the end of the day,” FAU Athletic Director Pat Chun said to OwlAccess.

Adding that cost of living stipend is a step in the right direction, but athletes should be able to fight for a bigger chunk. According to NCAA rules, athletes can’t unionize which severely limits their ability to collectively bargain for the same rights — such as a better work environment or more compensation — that a union does for its members.

This creates a situation where student athletes have no direct say in anything that happens to them and are forced to play by the NCAA’s rules, which may not always prioritize their players’ rights.

If we don’t give athletes a voice to get a piece of the revenue they generate, then there is something wrong with that system.

The alternative that exists is that kids would have to play overseas in a professional league or in a minor league to circumvent the system, and the money is not there yet to do that. The minor league entry level salary for baseball is $1,100 a month in the first year, meaning most players sit under the federal poverty line during the first few years of their careers.

Even if they take that chance, student athletes often cut their academic careers off early to try and go pro. A college football or baseball player will have to wait three years to be drafted if he decides to play for a university, thereby suspending his earning power while at school.

Whether the NCAA agrees with it or not, it has become the de facto minor leagues of both the NFL and the NBA when it comes to young talent. It’s become evident that with billions of dollars worth of revenue, college athletics are no longer about academics but are instead a vehicle for schools to make more money.

It’s only a matter of time before the NCAA will have to start paying its athletes, and schools like FAU should be preparing for that transition by making a plan for the change.