The school received national recognition, set several records and made a splash in the football world with the hiring of a new head coach. 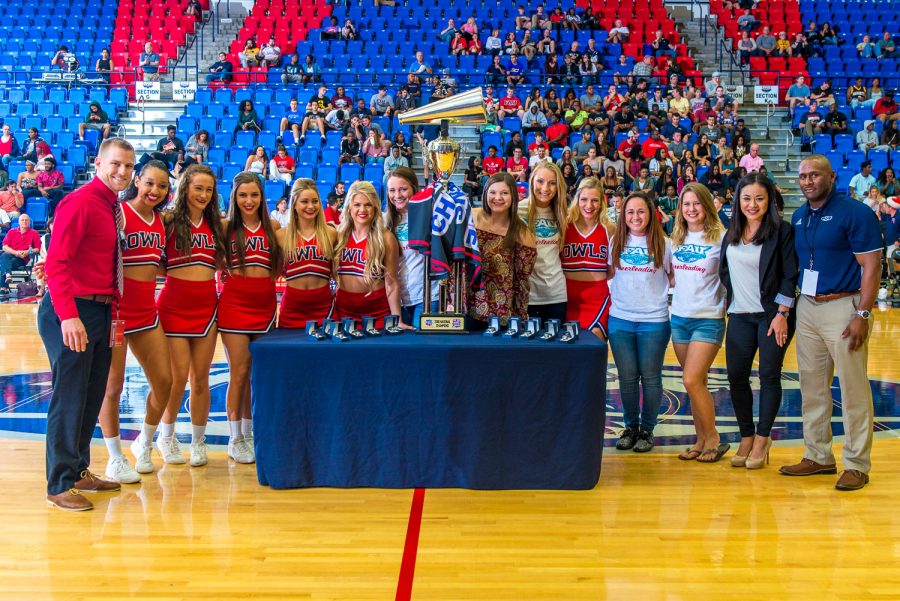 The FAU Cheer team poses with their national championship rings and trophy during halftime of an Owls basketball game in early December. Max Jackson | Staff Photographer

As 2016 winds down to a close, it has been an up and down year for FAU sports. The Owls had teams vary from national champions to the worst in Conference USA and everything in between.

As we countdown the final hours of 2016, here is a recap of some the best moments of the year in FAU sports:

FAU cheerleaders took first place in the 2016 National Cheerleaders Association Collegiate Nationals competition. It was the second time the team won a national championship in program history, with the first one coming back in 1999.

“This is one opportunity that is solely for them as a team,” coach Claudia Soto said prior to the competition. “A lot of the time during the school year they’re supporting basketball and football and everyone within the sports athletics here, and this is something that is just for them so it allows them to be competitive.”

“The hard work that goes into it really brings them together, really shows where they started and how far they’ve come, how they motivate each other and just push each other,” she said.

With the win, the Owls clinched their first 50-win season in over a decade. They also made an appearance in the NCAA tournament.

“This team has been on a mission all year long and fully engaged,” head coach Joan Joyce told FAU Athletics after the win.

A standout on the team that won 50 games, Kylee Hanson shined bright, winning multiple awards and leading the country in several categories — including ERA, hits allowed per seven innings and shutouts — to help the softball team win the 2016 Conference USA championship.

Hanson was named Conference USA Female Athlete of the Year, a National Fastpitch Coaches Association All-American, NFCA All-South Region and was one of 10 finalists for USA Softball Player of the Year.

“Kylee has worked very hard and certainly earned the recognition she has received,” Joyce told FAU Athletics. “She had as good as a season as anyone in the country.”

Athletic Director Patrick Chun said that “Kylee Hanson sets the bar for our entire athletic program on and off the field. We are proud of Kylee’s accomplishments of the entire softball program.”

Drinkwater set several team record with most clean sheets in program history (28) in just three years, and tied the program record for most shutouts in a year with 10.

Those numbers earned her multiple awards such as a spot on the National Soccer Coaches Association of America’s All-Central Region First Team and the Conference USA Goalkeeper of the Year award.

FAU traveled to Miami and defeated then-No. 1 ranked Miami 4-3 on April 20 and made a statement at the time at Alex Rodriguez Park.

“The guys played great,” head coach John McCormack told FAU Athletics after the game. “It was a fantastic college baseball game. I’m happy that we came out on top. When our guys needed it, they came through.”

Pitcher David McKay dealt six innings of work, striking out five Hurricane batters. Closer Cameron Ragsdale also earned his 11th save of the season, which was the second most by any pitcher in the conference at the time.

Football freshman running back Devin Singletary set a program record on Nov. 8 versus Rice when he recorded a total of 288 all-purpose yards.

Singletary had 257 rushing yards and three touchdowns on 22 carries, three receptions for 11 yards, and 20 yards on a kick return. The freshman’s 257 rushing yards was the 12th most nationally in a single game this season.

“It was a heck of a performance,” then-head coach Charlie Partridge said after the game. “Devin did a nice job and it was a great performance. Hopefully, he can build off that.”

Despite the Owls’ rough season finishing the year with just a 3-9 record, one of the few bright spots for the team was its running game, particularly junior running back Gregory Howell.

Howell ran for a single-season program-record 13 touchdowns and finished the year with 828 yards on 167 attempts.

He had an additional three touchdown game versus Charlotte on Oct. 9, when he rushed for 100 yards on 20 carries.

However, FAU came away with an upset, defeating Ohio State 79-77 on the road, with a last minute floater by sophomore point guard Nick Rutherford.

Senior Adonis Filer led the team that night with 23 points.

“Both in terms of the overall program and this season in particular, this is the kind of the game that we will always be able to pull things from,” head coach Michael Curry told FAU Athletics.