Over a thousand voters cast their ballot at FAU Arena on Tuesday. 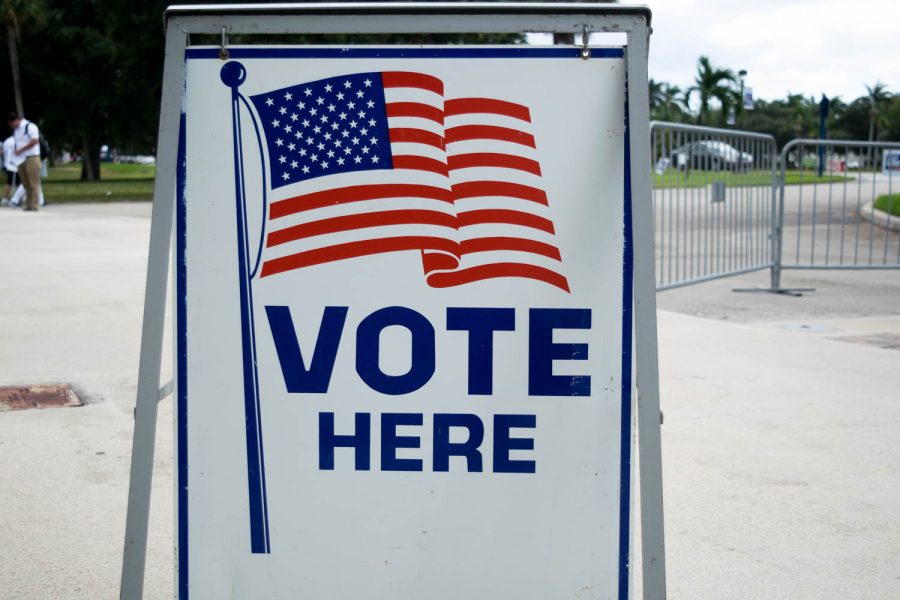 or those filing into FAU Arena on Tuesday, the venue did not play host to a men or women’s basketball game, but instead served as a polling place on Election Day.

Despite there being few voters at 7 a.m. at the opening of the poll, by 4 p.m. a line was working its way out and around the building. By 5 p.m., over 1,170 people had voted according to the polls.

Voting across the state closed at 7 p.m.

Line out of door and nearly around building for #FAU Arena polling place, over 1,000 people have already voted here today so far . pic.twitter.com/R6gGXar3Mf

Campaigners with signs for both Republican candidate Donald Trump and Democratic candidate Hillary Clinton competed for the attention of those outside the main entrance of the arena.

For several students, like freshman mathematics major Ben Parlo, this election season was the first time they could vote.

“I hate both of them, but Trump is so much worse,” Parlo said after voting for Clinton. “I don’t know how anyone could vote for him.”

Sophomore business major Corey Zapin, who selected Trump, said one of the reasons why he picked the Republican candidate is because of his reputation as a businessman.

“He isn’t a corrupt politician, he’s an outsider,” Zapin said. “He’s not going to cater to special interests.”

Craig Agranoff, an adjunct political science professor at FAU, was outside the arena with a group of students who were trying to sway voters at the door. The Boca Raton native started the Advance Campaigning program at FAU — a bi-semesterly class where students who are interested in a career in politics can apply on a first-come, first-serve basis to learn about running a political campaign.

“There is a ton of money to be made in campaign financing and strategy,” Agranoff said of the program, which he created in 2014. “We all have watched ‘Scandal,’ we have all watched ‘House of Cards.’ It’s like that in real life.”

Among the people canvassing outside was Craig Ehrnst, who is running for the Greater Boca Raton Park and Beach District seat one.

“It’s the heart of Boca Raton, we are a college town,” he said. “My kids grew up playing soccer on the fields here, which were funded by the community.”

Ehrnst said that he wants to focus on getting the boardwalk reopened at local nature preserve Gumbo Limbo, which has been closed for renovations since February 2015. He said that he feels like students are being robbed of a park near campus and that they only have a limited window — four years — when they can freely use it.

“You can build the Empire State Building in a year and 45 days, but you can’t build a boardwalk in two years? That’s the kind of red tape we’ll have to deal with,” Ehrnst said.

While some of the people campaigning at the door of the arena held signs or pamphlets, one man was armed with a guitar.

Banjo Jack, whose real name is Jack Williams, greeted people at the entrance with his musical stylings, which were in favor of Clinton. The retired mental health worker has been campaigning for her since September.

“I’m campaigning for love,” he said. “So many people have talked about hating one candidate or the other, I’m just looking to restore love in the world between people.”

Williams believes it’s important for people of all ages to go out and vote, saying, “By not voting, you’re making a statement America can’t be saved.”