Owls Racing looks to build on tradition after recent success

After 10 years of creating cars from scratch, the team prepares to enter the spring bigger than ever. 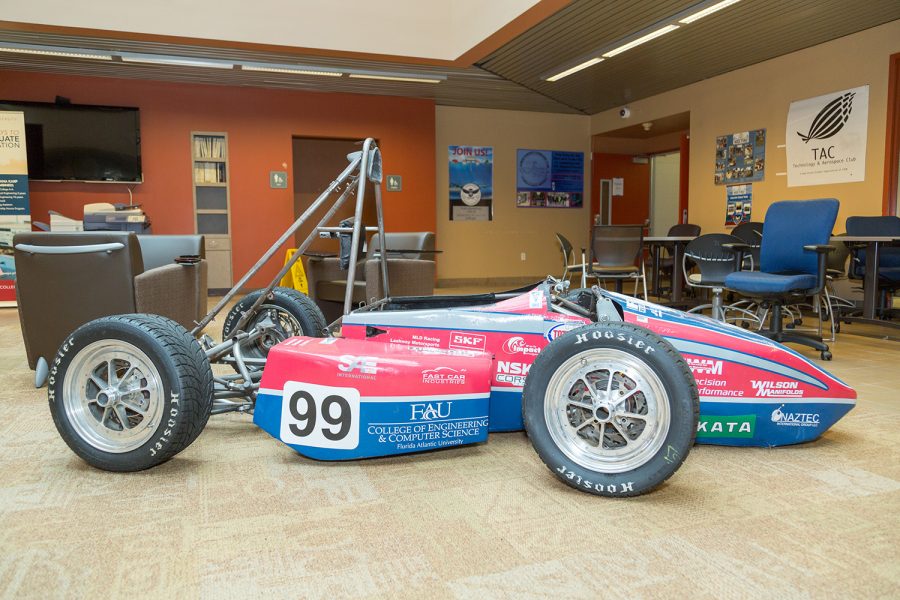 One of the past race cars used by Owl Racing now sits in Engineering West's lobby of the College of Engineering and Conputer Science. Brandon Harrington | Contributing Photographer

Correction: In the print edition of this article, public relation and marketing lead Thomas Strickland was incorrectly referenced to as Thomas Kipp. The article has since been altered to include the correct name

After starting in 2006, Owls Racing is still revving its engines 10 years later.

The team has come a long way from building racecars in a shed behind the Engineering West building to winning first place out of five teams on Sept. 27 in the third-annual Formula Society of Automotive Engineers Match Race in Georgia — the team’s second win this year.

As part of the tradition of working rain or shine in between classes, pulling late-night hours and making sure every piston and gasket works properly, these students make it their goal to balance time between school and building a car.

According to Thomas Strickland, the public relations and marketing lead of the organization, it takes about three months for the team to build the body of the car, 10 months to make sure the design is correct and that the vehicle is operational and an additional 2 1/2 months to test the vehicle.

The team tests its vehicle at its sponsor Fiat Chrysler’s test grounds in Naples, Florida, as well as on campus near FAU Stadium. Strickland recalls times when the roaring of the engine would cause car alarms to go off on campus, forcing encounters with FAU Police due to noise complaints.

Although they build the body of the car, they do not build the engine. According to Strickland, they purchase it from an engine builder or recycle the engine from a previous car.

When it comes to picking the drivers for competition, the team chooses six members who have put an ample amount of time and work into the car and who are able to unbuckle their seatbelt and turn off the car within five seconds.

“I believe that the friendship and memories I created with everybody there is what makes it a very fun experience,” Ksionek said.

One of the experiences he will never forget took place this year.

During the endurance test of the team’s vehicle at a competition, the temperature dropped to 40 degrees and it started to rain and hail. Ksionek recalls how driver Stephen Lyons was “a little nervous” because the team hadn’t practiced driving in wet weather.

Despite the added pressure, there was no damage to the vehicle and the team managed to win first place.

Strickland said Owls Racing currently has 30 sponsorships and counting. Sponsors include FAU’s College of Engineering and Computer Science, Monster Energy Drinks and Fiat Chrysler Automobiles. “The more outreach we get, the more companies know about us … There is definitely a lot of sponsors that are helpful to us and building the car,” President Marco Cheraso of Owls Racing said.

According to Ksionek, sponsors help the team acquire parts and equipment, gain access to other facilities and receive advice from experienced professionals.

Cheraso said, “This year we’ve become more organized [and] reached out more to the school and sponsors.”

In 2010, Owls Racing moved from the shed to an official shop in the Engineering West building. Its current shop is located in Room 156, where the team meets every Tuesday and Friday.

“Provided we keep on the same track, and we keep reaching out more and more, I think it can only move up from here. The more we are known about … the more we get,” said Cheraso.

The president said the club’s other goal, besides gaining sponsors, is the recruitment of new members who will put in the time and effort required to keep the team at the top.

Currently, the team is preparing for the Kennesaw State University Southeastern Invitational race in Kennesaw, Georgia at the end of February and the FSAE race in Brooklyn, Michigan from May 10-13. Strickland said this gives the team a chance to show off its car, get noticed by sponsors, make a name for itself in the racing world and potentially bring home a trophy.

According to Strickland, with its travel budget, the team is able to pack up the shop in a trailer, rent minivans and make the 22-hour drive up to Michigan.

Ksionek said that while the club provides hands-on experience, it’s also helped him learn other important traits like time management, teamwork, attention to detail and the ability to trust others.

“I learned just as much engineering-related knowledge being a part of Owls Racing as I did in the classroom,” said Ksionek. “Also, having the opportunity to drive a racecar at competitions is pretty fun.”

Although the club consists mostly of mechanical engineers, any major is welcome to the team.

“When I first joined, I didn’t know how much I wanted to get involved,” Cheraso said. “But the more I was part of it, eventually the thought came in the back of my head that I wanted to run the club. I went for it and here I am.”

Cheraso added that this is the first year the team is adding a designated design portion to the workload schedule, which will reduce the amount of time it takes to manufacture the vehicle’s body.

Steven Stanfield, the suspension team leader and a junior mechanical engineering student, wants to go into racecar engineering after graduation.

“I’ve always loved racing and I hope to go into racing when I’m older,” he said. “I want to go into the mechanics on the track side, not necessarily driving.”

Grant Browning, one of the original 2006 Owls Racing alumni, is currently working for Corvette Racing, according to Cheraso.

Stanfield said, “We’re more than a bunch of guys in a garage building a car, we’re engineering students. We’re putting a lot of time and effort into this … It’s going to become more well known, so that freshmen coming in actually know that we exist.”