A guide to where the front-runner candidates stand on top voting issues. 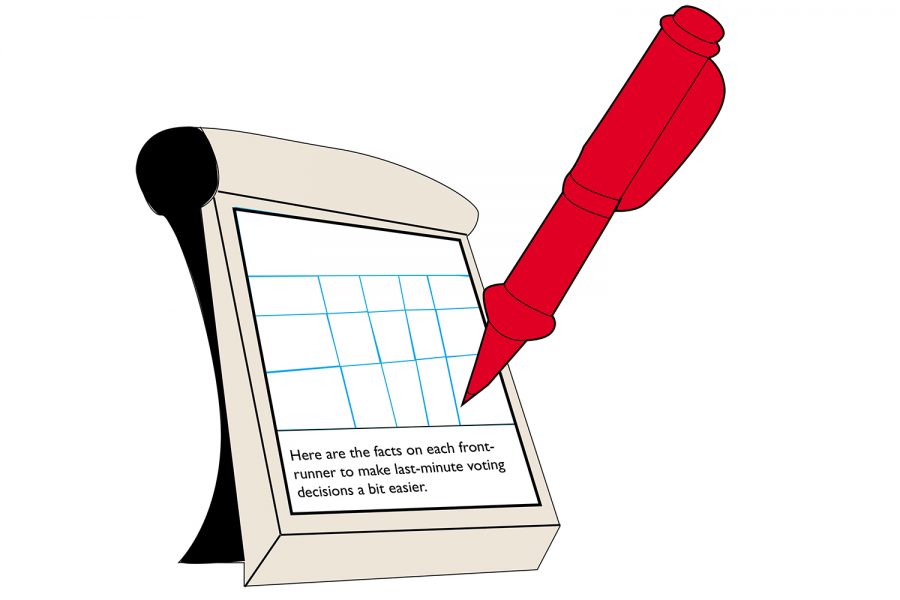 Donald Trump believes that the legalization of marijuana should be decided at the state level.

He maintains that drugs should be legalized to take revenue away from drug cartels — whether this applies strictly to marijuana, or covers other illegal substances is unclear.

Trump told the Washington Post that police officers will no longer be shot on the job in disputes.

Trump also said that police need to make changes as well, stating to the Post that “100,000 unbelievable things can happen … and it takes one mistake, one mistake that is broadcast on the newscasts for weeks.”

Trump supports gun ownership and believes that making concealed carry permits legal across all 50 states is key to stopping and deterring crime.

“The right of self-defense doesn’t stop at the end of your driveway,” Trump told CNN. “That’s why I have a concealed carry permit and why tens of millions of Americans do too. That permit should be valid in all 50 states.”

“Under a Trump Administration, there will be no job security for VA executives that enabled or overlooked corruption and incompetence,” reads Trump’s campaign website. “They’re fired. New leadership will focus the VA staff on delivering timely, top quality care and other services to our nation’s veterans. Under a Trump Administration, exposing and addressing the VA’s inefficiencies and shortcomings will be rewarded, not punished.”

On top of that, Trump has focused his sights on China, touting that he will stop its illegal export subsidies and lax production standards. He plans to “lower our corporate tax rate to keep American companies and jobs here at home,” according to his site.

“Attack our debt and deficit by vigorously eliminating waste, fraud and abuse in the Federal government, ending redundant government programs, and growing the economy to increase tax revenues,” reads Trump’s website. “Closing the deficit and reducing our debt will mean China cannot blackmail us without our own Treasury bonds.”

In terms of reducing the national debt, the New York Times reported that Trump’s proposed corporate tax cuts would cost the country $7.2 billion over the course of a decade.

According to Business Insider, Trump believes that conserving clean water is “one of the most important issues we face as a nation for the next generation.”

He does not accept scientific evidence that climate change is real and wants to dismantle the Paris agreement that aims to limit global warming to below 2 degrees Celsius.

“As your president, I will be the biggest cheerleader for school choice you’ve ever seen,” Trump told CBS news. “Parents can home-school their children.”

Trump has called Common Core a disaster, saying that education needs to be localized as opposed to approaching each school with a national standard.

Trump also wants to get rid of the Department of Education, stating that it has “been taken over by bureaucrats in Washington.”

“I would end Obamacare and replace it with something terrific, for far less money for the country and for the people,” Trump told Iowa newspaper KCCI Des Moines.

The candidate hasn’t said much about a proposed replacement health care plan, but he did share where he planned to issue major cuts — Planned Parenthood.

Trump wants to impose a 20 percent tax on all imported goods in order to lessen the number of imports and decrease competition for American-made goods, according to PolitiPlatform. He also plans on issuing a 15 percent tax on businesses that outsource jobs.

Under a Trump presidency, single individuals making less than $25,000 or couples earning under $50,000 would not have to pay income tax.

“That removes nearly 75 million households — over 50 percent — from the income tax rolls,” reads Trump’s website. “They get a new one page form to send to the IRS saying, ‘I win,’ those who would otherwise owe income taxes will save an average of nearly $1,000 each.”

According to The New York Times, Trump vowed to create 25 million jobs during his time as president, but did not provide specifics on how he planned to accomplish this.

She also supports the legalization of medical marijuana and wants to prioritize treatment and rehab as opposed to incarceration for low-level, nonviolent drug offenders, according to PolitiPlatform.

Clinton wants a full ban on military-grade weapons available for purchase in the U.S. and wants to impose a stricter screening process for individuals who wish to purchase firearms — making it more difficult for those with severe mental illnesses or criminal backgrounds to buy guns, according to her site.

Along with strengthening existing alliances, Clinton wants to invest in partnerships in Latin America, Africa and Asia.

“America and our allies, especially Israel, will be safer if we vigorously enforce the nuclear agreement with Iran and implement a broader strategy to confront Iran’s bad behavior in the region,” reads Clinton’s site.

For war veterans, “Hillary’s plan will transform the [Veteran’s Association] into an integrated health care system and care coordinator, and improve access and services for women and LGBT veterans,” Clinton’s website states. “She also understands the unique challenges faced by many veterans and will ensure that the VA and [Department of Defense] remain national leaders in vets-specific health issues while expanding access to mental health services and treatment.”

Clinton supports the use of green energy sources and wants to have more than half a billion solar panels installed across the country by the end of her first term, according to PolitiPlatform. She also looks to implement more efficient hydropower generation from existing U.S. dams.

Her website reads that she wants to “renew our shared commitment to the conservation of our disappearing lands, waters, and wildlife, to the preservation of our history and culture, and to expanding access to the outdoors for all Americans.”

If elected president, Clinton wants to provide grants to states so that students do not need to take out loans for tuition at public colleges, universities and community college.

“States will be rewarded for ensuring that no student should graduate with debt for tuition — and limiting costs for non-tuition expenses,” reads Clinton’s website.

For students with existing loans, Clinton wants to make income-based repayment simple and universal, so that students’ career choices should not be impeded by their college debt.

Colleges would also be expected to be transparent with their graduation rates, grades and graduate success.

“Our colleges and universities should be upfront about graduation rates, likely earnings, and likely debt, and how those metrics compare with other schools,” Clinton’s site reads. “Clinton’s plan will make sure that students can shop around, rather than roll the dice.”

Clinton will continue to defend the Affordable Care Act and build on it to expand affordable coverage, slow the growth of health care costs and make it possible for providers to deliver ideal care to patients, according to her site.

She wants to make health care more affordable overall by making copays and deductibles lower and reducing the costs of prescription drugs. She also supports reproductive health care for women.

“Corporate profits are near record highs — but workers have not shared through rising wages,” Clinton’s site reads. “Profit sharing is linked to higher pay, benefits, and productivity. That’s why Hillary’s plan creates a 15 percent tax credit for companies that share profits with workers on top of wages and pay increases.”

She plans on increasing the minimum wage, expanding public transit options, protecting workers from exploitation and investing in the expansion of local food markets.

Voting for a presidential candidate on the ballot is not the final step — you still need to check a box next to the name of a senatorial candidate. The presidential candidates are taking up so much media attention that it can be difficult to figure out which senate candidate stands for what — and the last thing you want to do on a ballot is choose randomly. Here are the main policies touted by Republican candidate Marco Rubio and Democratic candidate Patrick Murphy.

Marco Rubio disagreed with the Supreme Court decision to legalize same-sex marriage in all 50 states, but included that it is now the law of the land and all Americans must adhere to the decision, according to PBS.

However, he told CNN that some businesses, like wedding photographers, should be allowed to argue for religious freedom and deny service to same-sex couples, and others, such as hotels, should not.

In terms of abortion, Rubio wants to put a ban on abortion after 20 weeks from fertilization, with the exceptions being the life of the mother, rape victims or in cases of incest.

Rubio would simplify the tax process by establishing two rates: 15 percent for individuals making under $75,000 and 35 percent for those earning over that amount, according to PBS. Families would also be eligible for a new $2,500-per-child tax credit.

Rubio told The Washington Post: “I do not believe that human activity is causing these dramatic changes to our climate the way these scientists are portraying it.”

He is opposed to penalizing carbon dioxide emissions, as he believes it would impede economic activity.

“We are not going  to make America a harder place to create jobs in order to pursue policies that will do absolutely nothing, nothing to change our climate,” Rubio said during a September debate.

Medical marijuana is fair game for Rubio, but he is opposed to recreational use.

According to OnTheIssues, Rubio is against gun control laws because “Criminals don’t buy their guns from a gun show,” as he said during a Fox News debate.

Rubio also argues that criminals will ignore any imposed gun laws, so imposing them on law-abiding citizens will give criminals an unfair advantage.

“I believe law-abiding people have a fundamental constitutional right to bear arms,” Rubio told CNN in a series on presidential hopefuls. “And I believe criminals and dangerous people should not have access to guns … And I’m troubled this debate is about guns. It should be about violence. Violence is the problem, guns are what they’re using.”

Patrick Murphy advocates for equal rights regardless of sexual orientation, according to OnTheIssues, and wants to enforce against anti-gay discrimination in public schools. He also believes that there should be more funding and services for victims of domestic violence.

“[Murphy] believes that we must also look to long-term economic growth by investing in infrastructure — like roads, bridges, railways and ports — as well as skilled labor and manufacturing, basic scientific research and development, and education,” reads Murphy’s site. “Without these investments we will lose our ability to compete in a global scale with rising economic powers such as China and Brazil.”

Small businesses should also be given priority tax incentives to provide stability and promote growth, according to Murphy.

The Democratic candidate supports Obamacare, but aims to tweak it in order to provide a public option that would encourage competition in health care coverage, according to FloridaPolitics.

Many health care providers like Aetna, United Healthcare and Humana pulled out many of their policies from the Affordable Care Act because of lost revenue, according to FloridaPolitics. The remaining policies therefore are more expensive.

“America must invest in the clean-energy economy and provide tax credits to spark development and manufacturing of cost-effective windmills, solar panels, electric cars and other technologies to keep us at the leading edge of this growing industry,” Murphy’s website reads.

The MarijuanaTimes calls Murphy a pro-pot Florida representative, and he has co-sponsored legislation such as the Marijuana Business Access to Banking Act and the Small Business Tax Equity Act, which helps small marijuana dispenseries compete in the market.

On the topic of guns, Murphy is opposed to gun ownership and calls for keeping “assault weapons out of the hands of dangerous people,” according to Politifact, and doesn’t believe “that civilians need access to military-style assault weapons.”