Several hundred people were in attendance of the watch party. 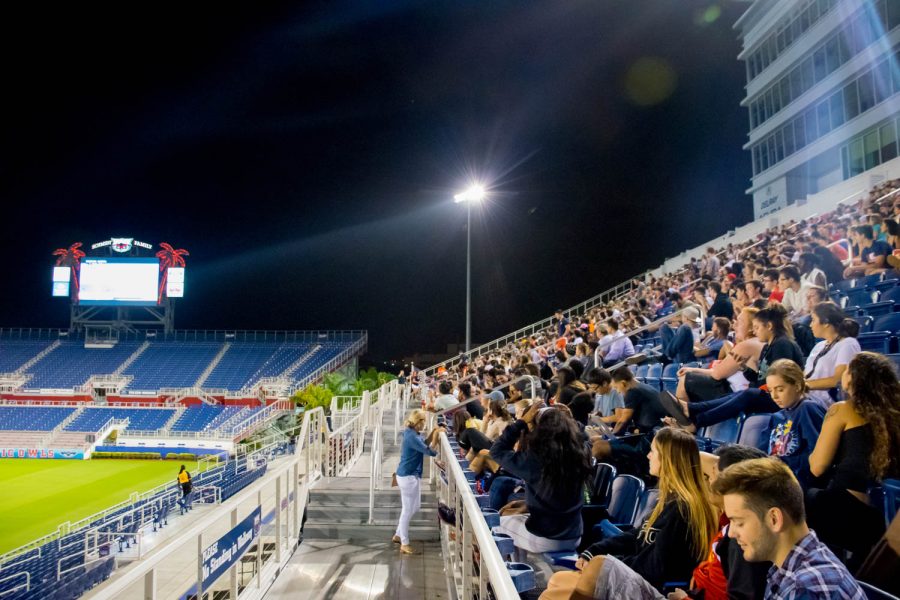 Students sit and wait for the start of the debate on the Jumbotron at FAU Stadium. Craig Ries | Contributing Photographer.

Instead of showing replays during a Florida Atlantic football game, the Jumbotron at FAU Stadium was used to air the third and final presidential debate for students at the Boca Raton campus.

On Wednesday night, several hundred people gathered in the stands to attend the viewing party, which was one of 11 Homecoming events. The party was hosted by Student Government, Program Board, Students Advocating Volunteering Involvement, Resident Student Association, LEAD and Service-Learning and Student Affairs.

Cairo and Walters aired a brief video on one of their new initiatives this year called #MyIssues2016, which aims to have students share issues that are important to them via social media in the upcoming election.

One student who hasn’t followed the election so far and is not planning on voting, judged what he was watching and wasn’t in favor of Trump.

“I am realizing Donald’s not fit to be president, he’s speaking at like a fifth-grade level,” freshman mechanical engineering major Ruben Eugene said. “I use bigger words than he does. He doesn’t speak like he’s educated.”

Nicole Hansen, a junior accounting major who wore a red “Make America Great Again” hat, said she is not convinced that Trump’s speech matters to his campaign and thinks his actions go unnoticed by most voters.

“He could be retired right now, he has the money. He doesn’t need all the negative media attention,” said Hansen. “I feel the media is biased to him. He has the country in his interests, and I believe in his leadership.”

During the debate, the crowd vocally reacted when topics like the economy, education and gun control were brought up. When the two candidates spoke on immigration, supporters of Donald Trump shouted, “Build a wall.”

After Hillary Clinton said that Trump was not fit to be in possession of the nuclear launch codes, her supporters cheered.

Some students in the crowd came to the watch party with expectations of how the debate would progress.

“I support Hillary, and her attitude towards education and women’s rights,” said junior finance major Joshua Parrish-Willis. “For this debate, Hillary might come up a little more on top. She’s more professional when it comes to debates. Trump interrupts and negates statements, whether they are the truth or not.”

The crowd that originally was estimated to be about several hundred people dwindled down to almost 100 by the end of the debate, leaving behind noisemakers that were handed out at the beginning of the night and left-over popcorn containers.

Freshman engineering student Zyon Treasure said he felt the debates were more for show than anything else.

“This election and these debates haven’t been educational,” said Treasure. “They’ve just been entertaining.”

Joe Pye is the news editor of the University Press. For information regarding this or other stories, email [email protected] or tweet him @Jpeg3189.