Students get a throwback performance for OWLFest 2016 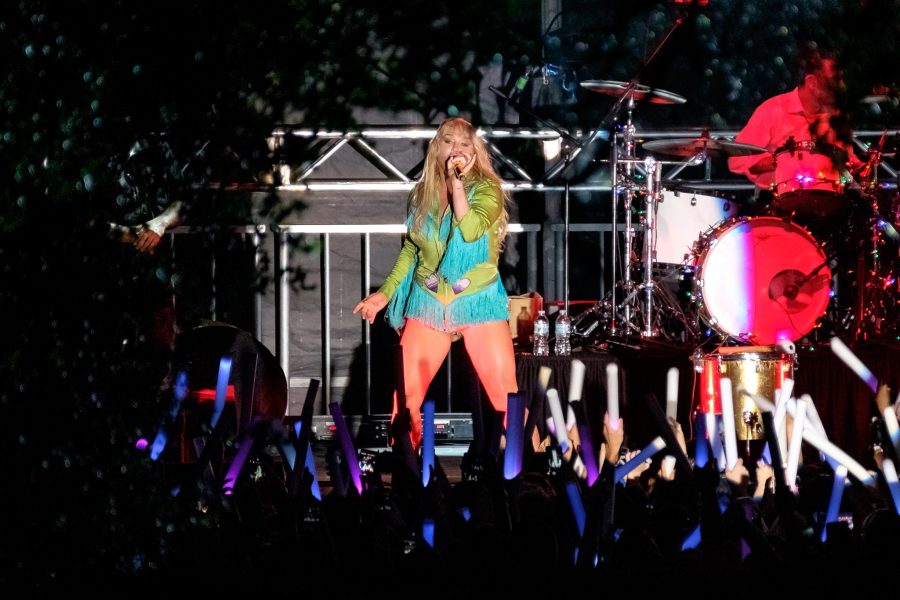 Kesha, who was the featured act of the 2016 OWLFest concert, performs her 2010 single “We R Who We R.” Mohammed F Emran | Staff Photographer

Florida Atlantic students were treated to old songs with a new sound on Wednesday night at this year’s Owl Fest concert.

The show started with hip-hop artist LunchMoney Lewis, whose setlist was a mix of original songs and popular throwbacks.

In between his songs about moms and paying bills, Lewis encouraged the crowd to sing along with older songs, such as the theme song to the show “The Fresh Prince of Bel-Air” and DJ Khaled’s “All I Do Is Win.”

The crowd stayed engaged throughout Lewis’ performance, but they went wild when Owl Fest’s headliner Kesha took the stage.

“Are you ready to have the spirit of rock ‘n’ roll change your soul?” Kesha’s announcer asked the crowd. “Let’s make some f**king noise, this isn’t church.”

Kesha took the stage with familiar hits like “We R Who We R,” “Dinosaur” and “Tik Tok.” What was not so familiar was the rock sound and five-member band that transformed the singer’s pop hits into rock songs.

“We have gathered here tonight to impregnate you with the sweet sound of rock ‘n’ roll,” Kesha told the crowd.

The singer exchanged her dirty-glitter pop aesthetic for a (similarly dirty) alternative rock vibe. She did not take the stage as Kesha, but as her new music group Kesha and the Creepies.

Students at the show were still able to sing along however, as Kesha and her band only played her older music, albeit in a much different way.

Kesha’s new group has recorded as many as 22 new songs, but has been unable to release or perform them due to her ongoing legal battle with her producer Dr. Luke, according to Mashable.

“I cordially invite you — take those middle fingers, put them to the sky, and just for tonight say ‘F**k the world,’” Kesha said to the crowd. “I’m talking about my f**king lawsuits, suck it! Ain’t nobody got time for that shit.”

Kesha kept the rebel rock vibe going throughout the show, throwing glitter and beer on the crowd, taking off some of her clothes and waving a gay pride flag during one of her songs.

The singer also decided to get political near the close of her show, yelling “F**k you Donald Trump” in place of some “Tik Tok” lyrics.

With her new Creepies band and sound, the familiar songs were given a new twist that the crowd seemed to appreciate. While the students didn’t get to hear the artist’s new music, they were still treated to plenty of throwbacks and just as much glitter.