Entering his final season with the program’s all-time sack record, the defensive end now sits center stage on the field. 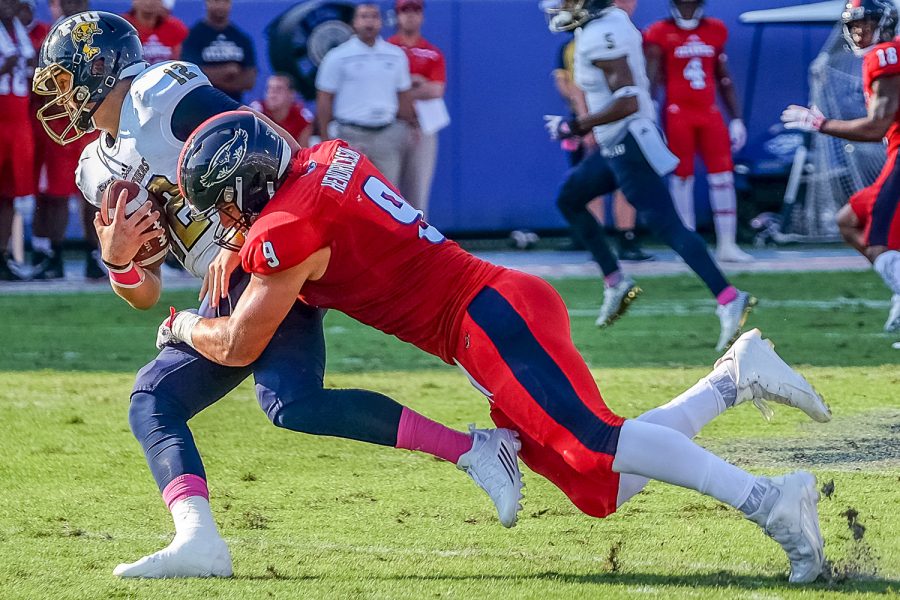 Trey Hendrickson (9) tackles Florida international quarterback Alex McGough for one of his 13.5 sacks during the 2015 season. Mohammed F Emran

Trailing by seven points with a little over eight minutes left in the game, with a struggling offense facing one of the most feared defenses in the country, the 2-9 Florida Atlantic Owls needed a player to step up and make an impact.

Treon Harris, quarterback for the No. 8 ranked Gators, received the second-down snap in the shotgun. Hoping to pick up a first down to mark the beginning of the end for the Owls, Harris rolled out to his right.

Then-junior defensive end Trey Hendrickson jolted from 10 yards behind the line of scrimmage, on the opposite side of the field, and chased down Harris for a sack while simultaneously stripping him of the ball. It was Hendrickson’s second sack of the game, but one that symbolized much more.

The ball bounced into the end zone where teammate and now-sophomore Ocie Rose dove on top of it for the game-tying touchdown, ultimately forcing overtime and proving that FAU, at its best, could compete with any team in the nation.

The sack — which marked the Apopka, Florida native’s 16th of his collegiate career — tied him for the program record and signified that Hendrickson wasn’t just beating up on his Conference USA foes, but that he could stand out among the best players in the country.

“I had a high rush and from that rush I saw that [Harris] was coming out of the pocket,” Hendrickson said while remembering the play. “When he came out of the pocket, it was basically just a foot race from there on, and once the sack happened I just watched the ball roll into the end zone and Ocie came up with it. It was pretty nuts.”

One week later, the criminal justice major collected four more sacks in the team’s final game of the season, placing him in sole possession of the program record. He finished the season with 13 1/2 sacks, the second most in the nation behind Pennsylvania State University defensive end Carl Nassib.

With one more full season left to build on his record, the hype surrounding Hendrickson is as high as ever. On July 5, the defensive end was named to the Bednarik Award watch list for college defensive player of the year. Fifteen days later, Conference USA coaches dubbed him the Preseason Defensive Player of the Year.

Hendrickson remains undeterred by the noise around him, much like he does game in, game out. Prior to each Saturday, the pass rusher prefers isolation to get his mind right. He touches the turf to get a feel for what it’s going to be like when he puts his hand in the dirt.

He visualizes plays and his surroundings, imagining a third-and-long, making a move and, based on film from the game preparation, pictures himself bursting through and making a big play.

With the added national attention, nothing has changed in Hendrickson’s routine.

“I think it’s important to go through every preseason as hard as you can and prepare the same way,” he said. “I haven’t earned anything yet. Coaches put me in the right position last year to make plays for them and I owe a lot to Brandin [Bryant] and Trevon [Coley], next to them opening up holes for me to make plays.”

Head coach Charlie Partridge has no doubt that his star defensive end will be ready. He remembers sending Hendrickson a congratulatory text for making it onto the watch list.

“His response to me,” Partridge said, “was ‘Coach, all I care about is this football team having success.’ That tells me that Trey is in a place that he cares so much about the team, the [recognition] has a chance to take care of itself, so he’s in a very good place.”

Last season Hendrickson put so much focus into the team’s success that he didn’t know he had tied the program’s single-season sack record until a reporter asked him to describe the feeling during last October’s Shula Bowl postgame press conference.

“Next year I’m excited to work with Ray Ellis and Shalom [Ogbonda] the same way I worked with Brandin and Tre[von],” he continued. “It’s a long season ahead of me so I’m not worried about anything.”

Hendrickson didn’t always have hype around him. A two-star recruit out of Apopka High School, the defensive end recorded nine tackles and 1 1/2 sacks during his freshman campaign.

The following year, the sophomore became a mainstay of the defensive line and recorded five sacks. Then in his junior season, the defensive end erupted onto the scene.

“We always really did feel that Trey could be a dominant player once he got consistent with his technique,” Partridge said. “Some of the pass rush decisions that he really started to improve on — because pass rush is really reaction and his decisions are programmed reactions — really improved and he’s always played hard.”

Now with such high expectations, the senior has a new responsibility — being a senior leader.

“I’m excited,” he said. “I’ve gotten a lot of tools over the years and when you play at a high level you gain the respect of other people, so when I talk people will listen.”

Incoming freshman Leighton McCarthy, who holds Wekiva High School’s season record for sacks (20), is ready to listen. After signing with the Owls in February, he expressed his excitement “to pick [Hendrickson’s] brain” and see what he can learn from the Preseason Defensive Conference Player of the Year.

“Every freshman goes through growing pains, me probably a little bit more than the others,” Hendrickson said. “But with coach Partridge, he gave me tools and ways to become a better man and become a better leader and I had a choice to listen or not listen. I chose to listen and he made me a better person and a better player for it.”

“He’s matured so much as a person,” Partridge said. “He has come so far in how he carries himself off the field, and I’m extremely proud of him, and that has led to his distractions going away and he can focus on being a great student and great football player … This year we expect another great year out of Trey and he knows that.”

This year will be unlike any previous one the defensive end has encountered. Hendrickson has a sack record to build on, young players to teach and NFL scouts to impress, all while trying to turn around a team fresh off consecutive three-win seasons.

“It gives me a lot to play for,” he said. “Every game I have an opportunity to build on it and I’m excited to get it rolling … Everybody has goals to go to the [NFL] and I think if I do the right thing on and off the field everything else should take care of itself.”