The Owls have allowed at least 30 points in every game this season, while the Panthers have failed to score more than 14 in a game. 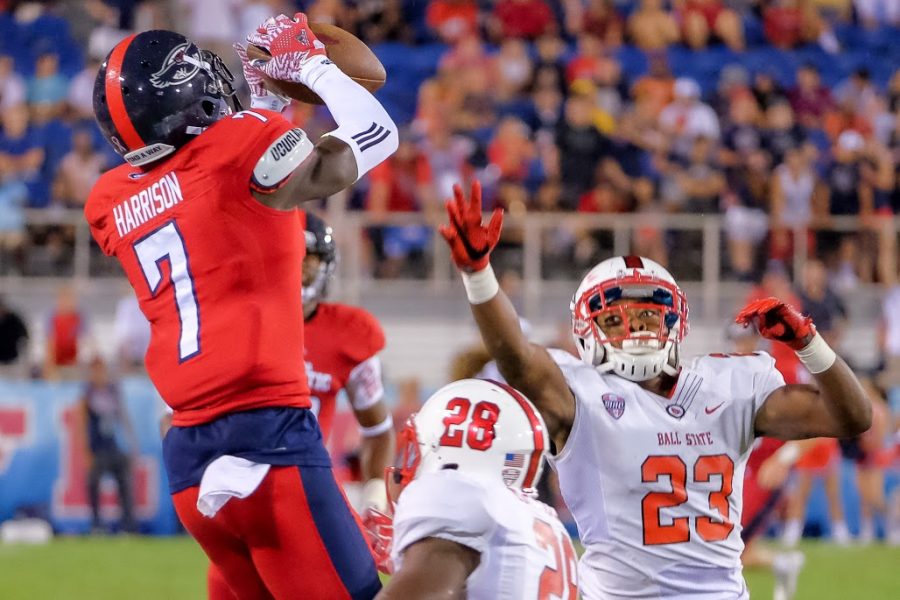 After starting the season with a win for the first time since 2012, the Florida Atlantic football team has been outscored 132-44 in three straight losses.

The Owls are coming off a loss against Ball State where the team led 14-0 at the end of the first quarter and 24-17 near the end of the third quarter, just to see the Cardinals take their first lead of the game with 1:47 left in the game.

On Saturday, FAU (1-3) will head down south to begin conference play against one of the six teams left in the Football Bowl Division that has failed to register a win this season — the 0-4 Florida International University Golden Panthers. The Panthers will be playing their first game under interim head coach Ron Cooper after the firing of Ron Turner earlier this week.

FAU won last year’s annual meeting — also known as the Shula Bowl — 31-17 in Boca Raton and are 11-3 all time against the Panthers.

Can the Owls get their run game going?

In the very first quarter of the season, FAU recorded 107 rushing yards. In the 15 quarters since, the team has totalled 313 yards on the ground.

Junior running back Greg Howell accounted for 87 of the Owls 107 first quarter rushing yards in the team’s first game. He is currently seventh in Conference USA with 76 rushing yards per game.

This week, the beat-up offensive line will have to pave the way against FIU linebackers Anthony Wint and Treyvon Williams, who have recorded the second and fourth most tackles respectively in C-USA.

Again, where is the defense?

FAU’s defense has allowed 40.5 points and 495.8 yards per game, both which rank in the bottom 10 of the FBS. Opponents have scored at least 30 points in all four games this season.

If there is ever a time for the defense to make a stand and break its current trend, that time would be Saturday against the worst offense in America, in terms of points per game (13.5).

Sophomores Jalen Young and Azeez Al-Shaair have been the busiest Owls on the field for the defense. Young’s 35 tackles are the ninth most in C-USA and Al-Shaair’s 27 are tied for 19th.

Noticeably absent in the stat book is senior defensive end Trey Hendrickson. The Conference USA Preseason Defensive Player of the Year and FAU’s all-time sack leader has been limited to 1.5 sacks and 11 total tackles.

A gem in the Woods:

Redshirt junior Kalib Woods has emerged as the Owls top receiver this year. He has more than doubled any of his teammates in catches and yards. His 92.8 yards per game ranks fifth in C-USA.

The 15th rendition of the Shula Bowl will kick off at 7 p.m. and will be available to watch on beIN Sports or to listen on ESPN West Palm 106.3 FM.