Students that register and live with their pets as emotional support animals could benefit from a decrease in stress and anxiety. 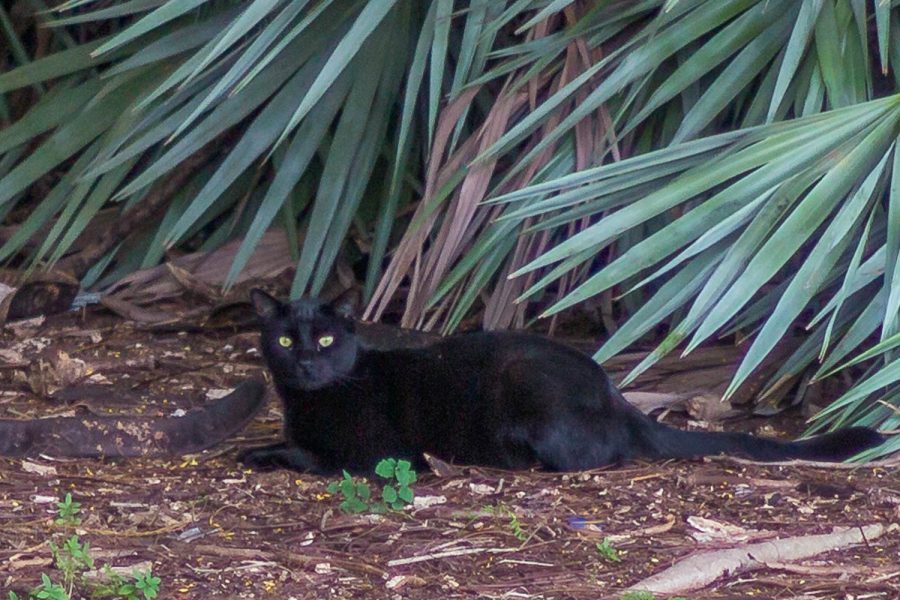 While you won't be able to bring in a cat from the campus grounds, students who need an Emotional Suport Animal can apply with the Sudent Accessibility Services. Andrew Fraieli | Managing Editor

ow do you combat increasing rates of depression, anxiety and stress in college students? One way could be allowing students to bring their pets to live with them.

Florida Atlantic currently permits “emotional support animals” or ESAs to live with students in on-campus housing because of the Fair Housing Act, which ensures students with anxiety and stress may have a qualified ESA on campus.

The practice of having ESAs is also supported by Section 504 of the Rehabilitation Act, which allows them in the dorms without needing to be fully registered as a service animal.

Students just need to register with Student Accessibility Services, formerly the Office for Students with Disabilities, and according to its website, prove that their animal provides emotional comfort or relief from psychological or physical issues that interfere with their day-to-day lives.

As of right now, the FAU system has a fairly general set of guidelines, in that virtually any animal can be registered as an ESA, which many have taken to mean “open for interpretation,” and have registered pets ranging from ferrets to miniature horses.

College kids are stressed out, now more than ever. According to a recent survey by Healthline — a consumer health info site — 44 percent of college students report having symptoms of depression, but 75 percent of those do not seek help.

A joint study done by Georgia and Idaho State Universities, as well as the Savannah College of Art and Design, found a “60 percent decrease in self-reported anxiety and loneliness symptoms among college students following animal-assisted therapy,” according to health news website Psychcentral.

However, unless a goldfish is your pet of choice, you need an ESA letter to bring a pet into the dorms.

Junior biology student Brady Lee from the University of Texas has an emotional support cockatoo registered to live with him in his on-campus dorm.

“She gives me someone to come home to everyday,” Lee said. “She is a very tactile animal — cockatoos are — which means that she likes to cuddle, so that’s really good for comfort in general so that’s basically what I do with her. I’ll come home and play with her and I’ll cuddle and it’s like a stress reliever.”

Web services like The Dogtor and Therapy Pet, medical sites that focus on ESA certification, allow students to purchase ESA letters after an easy-pass “exam” — a series of questions such as “what is your stress level” — that can be completed fairly quickly.

OPINION: Should students have emotional support animals in the dorms?
YES

Allowing pets as emotional service animals in dorms can help students afflicted with stress and anxiety.

Students in stressful situations should not need to jump through hoops just to bring their pets into the dorms.

No, I don’t think everyone should be able to bring pets in without a valid need. But college is a stressful time, and having a puppy to come home to can help to take the edge off.

Names and specifics of FAU students with ESAs are kept classified, but a housing representative estimated that there are around 10 animals registered to live on campus. While far from staggering, the ESA system is still in its early stages and has the potential for growth as more people become aware of the opportunity.

“I feel like it’s cool if your roommate is also cool with it,” said Twitter user Sammi Gebs in response to a University Press question about having ESAs in the dorms. “I also feel like there should be a weight limit.”

It is true that there are little to no facilities designed to house animals on campus. But if ESAs are going to increase in popularity, then that is something that FAU should seriously consider implementing in the near future.

Offering a pet-friendly floor or floors for those who benefit from the company of ESAs could potentially keep them from interacting with students who are either allergic or uncomfortable around animals.

And yes, dogs need to be walked during the day.

If ESAs are to have a larger campus presence, then fencing of an adequate amount of grass area for pets seems like a good idea. I would visit even without a dog just to take advantage of all the cute four-legged animals in one place.

Veterinary programs on campus can benefit as well from a larger animal population because of the larger pool of animals to treat. Students can even make money or just de-stress by walking their peers’ dogs when they have to run to class.

Animals in the dorms may bring some issues, but the atmosphere of the university could also stand to benefit from some added four-legged foot traffic.

Tucker Berardi is the features editor for the University Press. For information regarding this or other stories, email [email protected] or tweet him @tucker_berardi.

College can be a stressful experience, especially if you’re living in a dorm with randomly assigned roommates that you have never met before and all of a sudden you’re sharing a bathroom with them.

So does anyone really think that living in a college dorm would be any less stressful if every single one of your roommates had their own pet?

That scenario may seem unrealistic, but Florida Atlantic already allows what are deemed “emotional support animals” (ESAs) to live with students in their dorms according to Student Accessibility Services’ website.

Some people assume that an ESA is the same as a service animal. However, there is a major difference between the two.

A service animal requires one to two years of professional training and an ESA does not require any training at all.

Service animals need to undergo this rigorous training process in order to properly meet the needs of their future owners. There are many types of service animals and each type is trained to meet a specific need.

Most people are familiar with the concept of a guide dog for the blind, but there are also service dogs who assist with mobility issues, detect early warning signs of an epileptic seizure and help their owners deal with autism and post-traumatic stress disorder.

In order to become certified, a service animal must undergo a rigorous application process with the National Service Animal Registry, while anyone can easily just go online and pay for their pet to become a documented ESA.

I know the difference between service animals and ESAs because I work with animals for a living. I started off as a veterinary technician at Lunds Animal Hospital almost 10 years ago and I currently work at Lap of Luxury Dog Spa.

All of the veterinarians and trainers that I’ve worked with have agreed that service animals should go everywhere with their owners but people should not bring their ESAs into areas where animals typically aren’t allowed.

Don’t get me wrong, I think that ESAs are actually a great idea for anyone who has been diagnosed with a mental health issue, such as depression or anxiety. However, I think that if other students start registering their pets as ESAs in order to bring them into the dorms it will inevitably cause problems.

According to The New York Times, there was a student at Washington State University who registered a pig weighing almost 100 pounds as an emotional support animal and brought it to live in his dorm room on the second floor. The pig tore up the carpets, chewed on the furniture and broke through the closet doors.

To put it simply, colleges were not designed for animals. The bookstore doesn’t sell pet supplies and the medical facilities don’t have a veterinarian on staff.

Dorm rooms lack the necessary equipment to even bathe and dry a dog properly and a poorly bathed dog starts to smell really bad really fast. They’re also small and don’t have the space required for a dog to get the recommended amount of daily exercise.

On top of both that, college campuses don’t have dog parks. Students would be forced to walk their dogs and other animals in grassy areas adjacent to parking lots or in campus courtyards.

Since none of these areas are fenced in, students would have to keep their animals leashed to be respectful of those headed to class and this would severely inhibit the animal’s ability to exercise.

When animals don’t receive the proper amount of care and exercise, they become stressed, which contributes to medical and behavioral problems.

I believe that if a significant number of students register their pets as ESAs and bring them into the dorms, it would actually increase students’ overall stress instead of alleviating it.

It’s certain to cause problems that the school’s administration could not ignore.

FAU would be forced to make restrictions. This would result in some of the students who really need an ESA not being able to have one simply because other students chose to abuse the system.

So don’t scam your way into having a pet in your dorm room. If you need to relieve stress, find someone cute — and without four legs — to cuddle with.

Joshua Stoughton is a contributing writer with the University Press. For information regarding this or other stories, email [email protected] or tweet him @JoshuaStoughton.